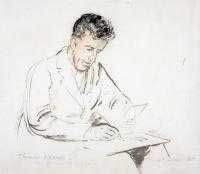 He was born in Ridley, Kent in 1903, studied at Regent Street Polytechnic and qualified as a teacher. But in 1932 he started to show the signs of mental illness and he was admitted to  the Maudsley Hospital.   After his release, Edward Bawden, a fellow artist, encouraged Hennell to write The Witnesses, an account of his mental illness.

It  is one of the finest accounts of a schizophrenic illness ‘from the inside’ that has been written.  In his preface to the book psychologist Humphrey Osmond compares Hennell’s book with many others documenting a person’s experience with mental illness and concludes “every one of them contains much interesting information, but none surpasses and few equal Hennell’s book”.

Osmond goes on to say “There is always a danger when rereading a favourite book for the sixth or seventh time that the magic may have evaporated and that having once enjoyed its virtues one can only now see its deficiencies [but if you were to ask me ] ‘Is this the real thing?’ as I laid the book down my answer would be ‘yes unequivocally ‘yes’”.

Hennell makes no attempt to be clinical and this gives his writing authority.  He reports what happened to him, with very little explanation.  From the start he describes puzzlement, the sense of destiny of doom as it seeps into his life.  All without any malice.  He does this economically and with conviction.  He does not elaborate and his writing carries one along in a way that makes it easy to put oneself in his shoes.

As Trotsky said ‘only a participant can be a profound observer’ and Hennell succeeds in being a superb observer.  His book is thus highly recommended reading.  His poems are a bit special too.

At the outbreak of war in 1939, Hennell wrote to the War Artists Advisory Commission offering his services as an artist and was named as an official war artist in 1943.  He took part in the Normandy Landings; recorded the war in Holland, India and Burma; and recorded the surrender of Singapore during World War II. But in November 1945,  Hennell was captured by Indonesian nationalist fighters and was presumed to have been killed shortly thereafter.