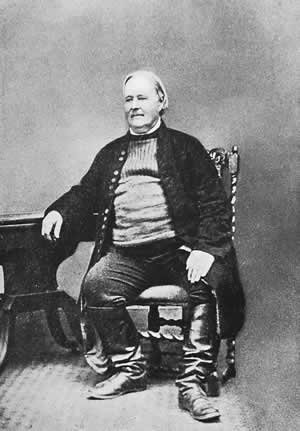 Robert Stephen Hawker was a Church of England vicar, a manic depressive, a poet and a mystic who had visions……….

The Reverend J F Chanter describing Robert Stephen Hawker quoted by Byles
Mr Hawker's sermons on Sundays made a deep impression on us, they were so out of the common and under them all lay that feeling and belief in spiritual beings and existences to which I referred. I remember, at Morwenstow, I stood as sponsor for a child at baptism and afterwards Mr Hawker preached on the baptism – his subject was guardian angels – he described most vividly a scene in heaven as a guardian angel was chosen to care for the newly baptised infant – the descent of the angel – his hovering around the font at the baptism – it was all so vividly described that you felt it was something the vicar had seen himself and one involuntarily glanced round to look for the presence of the angelic being

Robert Stephen Hawker
All, all is gone – no longer roll
Vision and dream around my soul;
But, in their stead, float down the wind
These fragments of a broken mind

Robert Stephen Hawker
Deep in thought I saw, not with my eyes, but with my whole body, a grave calm noble form in white.  He said or breathed this phrase 'Ephphatha is good but Amen is better still' I went away with this saying in my mind for long before I understood its force

Robert Stephen Hawker
From 'I would not be forgotten '– The Life and Work of Robert Stephen Hawker by Patrick Hutton
Demons have a pitching place in the air, where an atmosphere of gloom expands like a vast tent. Thence they glide; thither to return to recount the exploits of their sinful journey.  Thence perchance, pay periodic visits to their victims of Earth