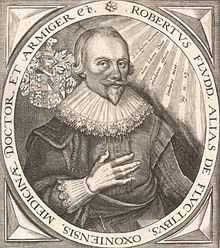 Robert Fludd, also known as Robertus de Fluctibus ( 1574 –  1637) was a prominent English Paracelsian physician. He is remembered as an astrologer, mathematician, cosmologist, Qabalist, and 'Rosicrucian apologist'.

Fludd was born in Bearsted, Kent, the son of Sir Thomas Fludd, a high-ranking governmental official (Queen Elizabeth I's treasurer for war in Europe), and Member of Parliament. He entered St John's College, Oxford in 1591, graduating B.A. in 1597 and M.A. In 1598.  Between 1598 and 1604, Fludd studied medicine, chemistry and hermeticism on the European mainland.  By his own account he spent a winter in the Pyrenees studying theurgy with the Jesuits.

On his return to England, Fludd entered Christ Church, Oxford. In 1605 he graduated M.B. and M.D. He then moved to London, settling in Fenchurch Street, and made repeated attempts to enter the College of Physicians. Fludd encountered problems with the College examiners, both because of his unconcealed contempt for traditional medical authorities, and because of his attitude. After at least six failures, he was admitted in 1609.  Fludd was one of the first to support in print the theory of the circulation of the blood.

Fludd's works are mainly controversial. In succession he defended the Rosicrucians against Andreas Libavius, debated with Kepler, and argued against French natural philosophers. 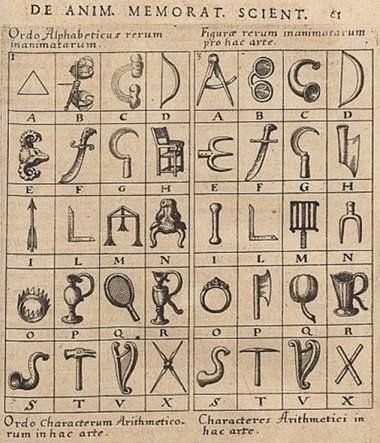 Fludd was not a member of the Rosicrucians, as often alleged, but he defended their thought. He produced a quick work, the Apologia Compendiaria, in 1615 against the claims of Libavius that the Rosicrucians indulged in 'heresy, diabolical magic and sedition'.   Fludd returned to the subject at greater length, the following year -  in 1616 Apologia Compendiaria, ; in 1617, Tractatus Apologeticus integritatem Societatis de Rosea Cruce defendens, and also in 1617 Tractatus Theologo-philosophicus, &c..  This last book is dedicated to the Rosicrucian Fraternity. It consists of three books, De Vita, De Morte, and De Resurrectione.

Johannes Kepler criticised Fludd's theory of cosmic harmony in an appendix to his Harmonice Mundi (1619).  In response, Fludd produced the Veritatis Proscenium Frankfort, 1621 in reply to Kepler. In it Fludd argued from a Platonist point of view; and he claims that the hermetic or "chemical" approach is deeper than the mathematical.

So as you can see, Fludd spent most of his time defending himself from attack from all sorts of quarters.

Fludd's philosophy is presented in Utriusque Cosmi, Maioris scilicet et Minoris, metaphysica, physica, atque technica Historia (The metaphysical, physical, and technical history of the two worlds, namely the greater and the lesser, published in Germany between 1617 and 1621).  In 1618, Fludd wrote De Musica Mundana (Mundane Music) which described his theories of music, including his mundane (also known as "divine" or "celestial") monochord.

I have added an extra completely unverifiable addition.  I think he suffered from migraine.  His descriptions and drawings are very similar to those of Hildegard of Bingen where the evidence of migraine is more solid.  Poor man.