If you compare the description in Observation 000153 – Hildegard of Bingen  and the diagram shown below which comes from Robert Fludd’s Utriusque Cosmi, Maioris scilicet et Minoris, metaphysica, physica, atque technica Historia, we can see an almost identical vision.

I am going to put no interpretation on this – Fludd for example could also have suffered from migraine – but the similarity in pattern is striking.  Fludd produced his book in 1617, Hildegard of Bingen  lived from 1098 to 1179.

Robert Fludd, also known as Robertus de Fluctibus was born on 17 January 1574 in  Bearsted, in Kent and died on – 8 September 1637 in London.  He was a prominent English Paracelsian physician, astrologer, mathematician, cosmologist, Qabalist, and Rosicrucian apologist

Hildegard of Bingen, was German [Bingen is in Germany] and was a Christian mystic and a Benedictine abbess.  She was venerated by the catholic Church as a  ‘visionary’ and polymath. She founded the monasteries of Rupertsberg in 1150 and Eibingen in 1165.

As such it is highly unlikely that Fludd obtained his notions from Hildegard.

We thus have an unexpected vision of common content obtained by two disparate people living centuries apart in different countries.  The first vision probably being caused by migraine. 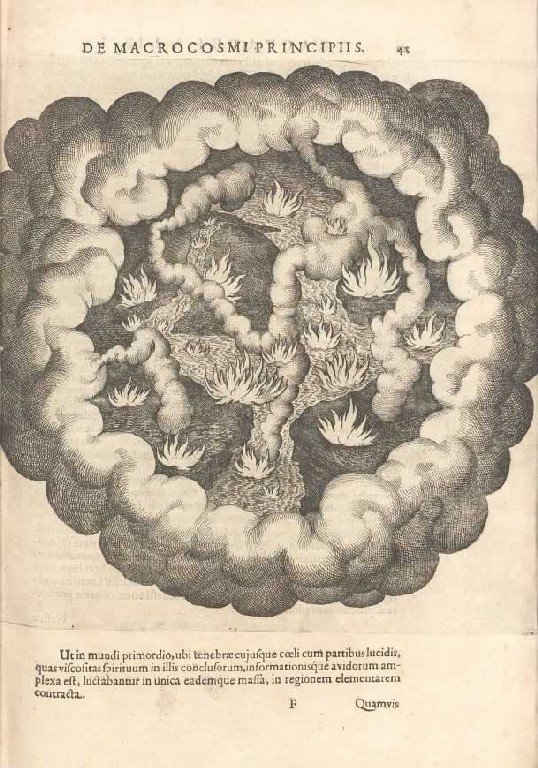