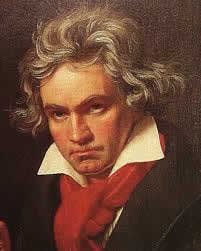 Ludwig van Beethoven ( 1770–  1827) was a German composer and pianist. He remains one of the most famous and influential of all composers. His best known compositions include 9 symphonies, 5 concertos for piano, 32 piano sonatas, and 16 string quartets. He also composed chamber music and choral works.  He also became, over time, a manic depressive.

Beethoven's first music teacher was his father, who attempted to exploit his son as a child prodigy.  Beethoven was seven when he gave his first public performance.  In March 1787 [aged 16], Beethoven traveled to Vienna for the first time, in the hope of studying with Mozart.  After just two weeks, Beethoven learned that his mother was severely ill, and returned home. His mother died shortly thereafter, and the father lapsed into alcoholism. In 1789 [aged 19] Beethoven obtained a legal order by which half of his father's salary was paid directly to him for support of the family. He also contributed further to the family's income by playing viola in the court orchestra. So as we can see, from a very early age Beethoven was put under a lot of stress and suffered a great deal of emotional trauma.

Around 1796, by the age of 26, Beethoven began to lose his hearing. He suffered from a severe form of tinnitus, a "ringing" in his ears that made it hard for him to hear music. A letter to his brothers records his thoughts of suicide due to his growing deafness and records his resolution to continue living for and through his art. Over time, his hearing loss became profound: there is a well-attested story that, at the end of the premiere of his Ninth Symphony, he had to be turned around to see the tumultuous applause of the audience; hearing nothing, he wept.

His deafness affected other aspects of his life too.  Beethoven had established a reputation in Vienna as a piano virtuoso.  After a failed attempt in 1811 to perform his own Piano Concerto No. 5 (the "Emperor"),  he also never performed in public again. By 1814, Beethoven was almost totally deaf. 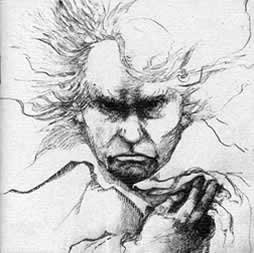 And from this tragedy of all tragedies, we see the results of what was to develop into full scale genius and full scale mania.   Beethoven composed his first six string quartets (Op. 18) between 1798 and 1800 and gave premieres of his First and Second Symphonies in 1800 and 1803.  He wrote piano sonatas like the "Pathétique" sonata and the piano sonata, known as the "Moonlight Sonata". In the spring of 1801 he completed The Creatures of Prometheus, a ballet.  And he was still only in his early thirties. The work of the middle period established Beethoven as a master. In a review from 1810, he was enshrined by E.T.A. Hoffmann as one of the three great "Romantic" composers; Hoffman called Beethoven's Fifth Symphony "one of the most important works of the age."  The works of his Late period are commonly held to include the last five piano sonatas and the Diabelli Variations, the last two sonatas for cello and piano, the late string quartets, the Missa Solemnis and the Ninth Symphony. 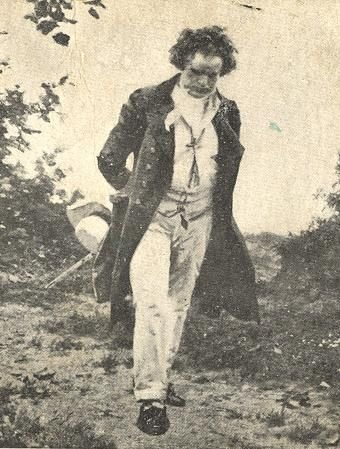 In the spring of 1811 Beethoven became seriously ill, suffering headaches and high fever. On the advice of his doctor, he spent six weeks in the Bohemian spa town of Teplitz. The following winter, which was dominated by work on the Seventh symphony, he was again ill, and his doctor ordered him to spend the summer of 1812 at the spa Teplitz.

He became at times irrational, often rather eccentric.

“Sources show Beethoven's disdain for authority, and for social rank. He stopped performing at the piano if the audience chatted amongst themselves, or afforded him less than their full attention. At soirées, he refused to perform if suddenly called upon to do so. Eventually, after many confrontations, the Archduke Rudolph decreed that the usual rules of court etiquette did not apply to Beethoven.”

Manic Depression and Creativity – D Jablow Hershman and Dr Julian Lieb
The government was equally tolerant and did nothing even when Beethoven said about the Emperor 'Such a rascal ought to be hanged to the first tree!'
On another occasion the composer remarked 'From the Emperor to the bootblack, all Viennese are worthless.  I have only one pupil and I'd like to get rid of him if I could – it is the Archduke'.
Free speech was not allowed in the empire, but Beethoven was excepted.  Anyone else saying what he did in public would have been jailed.

The World as Will and Idea – Arthur Schopenhauer
It is also well known that we seldom find great genius in tandem with pre-eminent reasonable-ness; on the contrary, persons of genius are often subject to violent emotions and irrational passions…..
The impression of the present moment is very strong with such people, and carries them away into impetuosity, emotion and passion.

By early 1813 his personal appearance had degraded—it had generally been neat—as did his manners in public, especially when dining.

Between 1815 and 1817 Beethoven's output dropped again. Beethoven attributed part of this to a lengthy illness (he called it an "inflammatory fever") that afflicted him for more than a year, starting in October 1816.  By early 1818 Beethoven's health  improved for a very brief interlude.  He was ill again for an extended time in 1821, and completed the Missa in 1823, three years after its original due date.

Manic Depression and Creativity – D Jablow Hershman and Dr Julian Lieb
Beethoven's body continued to disintegrate.  His mania propelled him through illnesses in the summer of 1823, but he had painful problems with his eyes from April into July.  In August he wrote 'I am feeling really badly and not only because of my eyes'  Thanks to the magic of mania, that was one of his most inspired summers, filled with ecstatic rambles in the woods and writing music all day long.  So much of Beethoven's life was spent in sickness and pain, weakness and depression that it is remarkable that he accomplished anything at all.  Given the pervasiveness of his misery, his work is all the more miraculous.

Beethoven turned to writing the string quartets. This series of quartets, known as the "Late Quartets," went far beyond what musicians or audiences were ready for at that time.  Opinion has changed considerably from the time of their first bewildered reception: their forms and ideas inspired musicians and composers including Richard Wagner and Béla Bartók, and continue to do so. Of the late quartets, Beethoven's favorite was the Fourteenth Quartet, op. 131 in C sharp minor, which he rated as his most perfect single work. 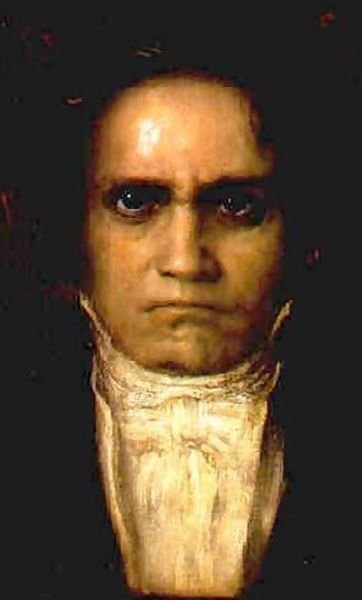 Beethoven wrote the last quartets amidst failing health. In April 1825 he was bedridden, and remained ill for about a month. The illness is remembered for having given rise to the deeply felt slow movement of the Fifteenth Quartet. He went on to complete the quartets now numbered Thirteenth, Fourteenth, and Sixteenth. The last work completed by Beethoven was the substitute final movement of the Thirteenth Quartet. Shortly thereafter, in December 1826, illness struck again.

Beethoven was bedridden for most of his remaining months. He died on 26 March 1827 at the age of 56 during a thunderstorm. His friend Anselm Hüttenbrenner, who was present at the time, said that there was a peal of thunder at the moment of death.

Whatever caused his deafness probably caused his manic depression, his stomach problems and all his other illnesses and it was probably brain damage of some sort – progressive deterioration affecting more and more parts of the brain.  Any damage to the brain affects the workings of the body, as such all his other symptoms could have been related to damage.  But as to what damaged his brain we will never know.  Some have speculated that it was the medicines given to him.  There is also quite a strong argument on the side of lead poisoning from the utensils in use at the time and the wine he drank.  Whatever it was produced moments of pure genius and times of appalling depression.  And he never heard his own music; how cruel life is, how cruel.