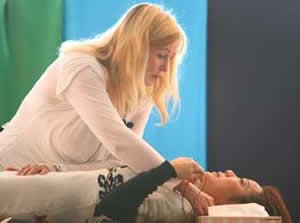 Barbara Ann Brennan (born 19 February 1939) is an American author, spiritual healer and businesswoman working mainly in the field of ‘energy healing’.  Brennan has  Ph.D.s in philosophy from Greenwich University and theology from Holos University, both earned in 2001.

Brennan originally trained as a physicist. She received her Bachelor of Science degree in Physics in 1962 from the University of Wisconsin-Madison, and two years later received her Masters in Atmospheric Physics from the same institution. She then worked as a research scientist at NASA's Goddard Space Flight Center.

Since 1970, however, Brennan has researched and worked with the human energy field. She completed a two–year training program in Therapeutic Counselling at the Community of the Whole Person in Washington, D.C., followed by completion of a three-year program in Core Energetics at the Institute for Core Energetics in New York, New York in 1978 and a five-year program in Spiritual Healing at the Phoenicia Pathwork Center in Phoenicia, New York in 1979. She was strongly influenced by Eva and John Pierrakos, who founded a system for self-transformation called the Pathwork, drawing on the ideas of Wilhelm Reich. Brennan worked with the Pierrakos, and became a practitioner of the Pathwork and core energetics. She developed her own private healing practice and then established a training programme to teach others.

Her first book, Hands of Light: A Guide to Healing Through the Human Energy Field, became popular in 1989 and is considered a "classic" in the field of spiritual healing, with reputedly over one million copies in print in 22 languages. Brennan's books are most noted for their drawings of auras and energy fields, and her descriptions of how human energy fields interact with each other.

Her ideas and healing processes draw on the views of Theosophists such as C. W. Leadbeater and Alice Bailey.   She has popularized a seven-layer model of the energy field, each layer being structured of differing frequencies and kinds of energy and performing different functions. Brennan views the chakras as transformers that receive and process cosmic energy, as well as enabling expression and healthy functioning of the individual's own consciousness and psycho-physical make-up. Her unique contribution is to indicate two rows of chakras, arranged in pairs located at the front and rears, the front ones being associated with Feeling, the rear with Will, and the upper three with Intellect.

Brennan receives intuitive messages about her clients during sessions. She also ‘sees’ repetitive patterns in the energy consciousness of her clients indicating common roots underlying their difficulties. Her books draw on messages channeled from Heyoan, who is her spiritual guide.

Hands of Light: A Guide to Healing through the Human Energy Field, 1987
Light Emerging: The Journey of Personal Healing, 1993
Seeds of the Spirit, 1999