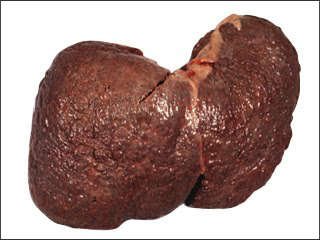 There are numerous problems that can occur with the liver that are best described under the general heading of Liver disease (also called hepatic disease). Hepatitis, for example, is inflammation of the liver and is characterised by the presence of inflamed cells in the tissue of the organ.

Liver and its functions

The liver has a number of very well defined functions in the body;

Any form of damage to the liver thus has the potential to disrupt these processes.

The symptoms related to liver dysfunction include some that are immediately apparent by looking at the person and yet others that are less obvious. The following relate directly to the functions above:

Mineral deficiency and vitamin deficiency - particularly deficit of fat soluble vitamins - minerals including iron and vitamins A, D and B1. From this a person may get, for example Anaemia

Mal-processing of fatty acids and irregularities of phospholipids and chloresterol, thus knock on effects of this may be

Problems handling toxins and poisons – the enzymes which normally break the harmful chemicals down into less harmful products no longer work and these can enter the body and blood stream causing numerous problems too many to list, but for example

Skin diseases - One of the causes of skin problems can be liver damage.  People or children, for example, with a damaged liver have in studies often developed eczema/dermatitis.
“These results suggest some relationship between atopic dermatitis and liver function in infants.  PMID: 7613128”
One of the side effects of the liver damage may be that it damages the enzymes needed to process Essential Fatty Acids and this inability to process the EFAs may then result in the eczema, in the chain explained below...
“Patients with atopic eczema and a mixture of allergic illnesses show biochemical evidence suggesting impairment in the desaturation of linoleic acid and linolenic acid by the enzyme delta-6 dehydrogenase. …... A distortion in the production of prostaglandins and leukotrienes, which might result from this block, can account for the immunological defects of atopy and a variety of clinical symptoms experienced by atopic individuals. Dietary supplementation with essential fatty acids relieves the signs and symptoms of atopic eczema ….PMID:  2424959”
So this tells us why people with liver damage may get eczema and other skin problems.  But this is not identifying the cause of the damage, simply treating the effects, which is helpful but not enough.  To treat the eczema we have to treat the liver damage.

The causes are as follows

Viruses - Hepatitis, inflammation of the liver, is caused mainly by various viruses (viral hepatitis).  Viral hepatitis may be caused by, for example

Alcohol – which is acting in the excessive doses needed for damage as a poison.

Toxins - Amanita toxin in mushrooms, carbon tetrachloride, plus numerous others.  Nanoparticles have started to become a major problem in this area.  Fungicides and pesticides can also be a problem.  Heavy metal poisoning has also been linked with liver disease.

Pharmaceuticals – which have an impressive record of damaging the liver.  The following links take you to the eHealthme web site and the pharmaceuticals which have a known record for producing various forms of liver disease, but this list is by no means complete

Nutritional deprivation – of various sorts from Mineral deficiency and vitamin deficiency to overdosing on certain foods.  Many foods taken at overdose proportions become toxic to the liver.  Those who are allergic to certain foods such as coeliacs may find that the food to which they are allergic becomes a toxin and damages the liver

Parasites – from liver flukes to tapeworms, from toxoplasmia gondii to ascaris

Bacteria - such as Legionella, Leptospira, Coxiella burnetii and Rickettsia rickettsii

Hereditary damage - Hereditary diseases that cause damage to the liver include hemochromatosis, involving accumulation of iron in the body, and Wilson's disease, which causes the body to retain copper. Gilbert's syndrome, a genetic disorder of bilirubin metabolism found in about 5% of the population, can cause mild jaundice.

Find the cause - see also Healing yourself.

The liver is one organ which is capable of rejuvenating itself [in time] as long as it is saved from further attack.

Any one of the diseases caused by liver damage, can themselves produce spiritual experiences, however, there is one direct effect from liver damage.

Damage to the liver could result in anaemia.  Because hemoglobin (found inside red blood cells) normally carries oxygen from the lungs to the tissues, anaemia leads to hypoxia (lack of oxygen) in organs.

And here we have the reason for the spiritual experiences, this chain of reactions leads to hypoxia.