Dr Jordan Peterson – The Mesopotamian gods and the Creation story 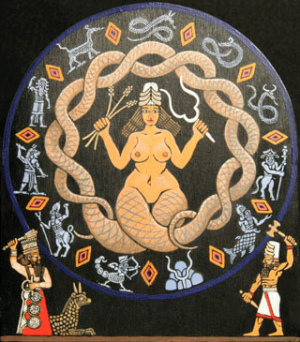 The Babylonian Creation epic or myth is considered to be a retelling of even older Sumerian material. Sumer was the earliest known civilization in the historical region of southern Mesopotamia (now southern Iraq), during the Chalcolithic and Early Bronze Ages, and one of the first civilizations in the world, along with Ancient Egypt, Norte Chico, Ancient China and the Indus Valley [see The Ancestors on our site]. Prehistoric proto-writing dates back before 3000 BC. The earliest texts come from the cities of Uruk and Jemdet Nasr, and date to between roughly c. 3500 and c. 3000 BC.  Along with being one of the first to create and codify written language, the ancient Sumerians were both astronomers and astrologers.

The Bible story of the creation myth is very similar to the Babylonian epic, but has been substantially rewritten to remove any ideas of there being an Intelligence hierarchy.  The only remaining indication is the concept of a ‘Day’, the ‘day’ being a Planet. 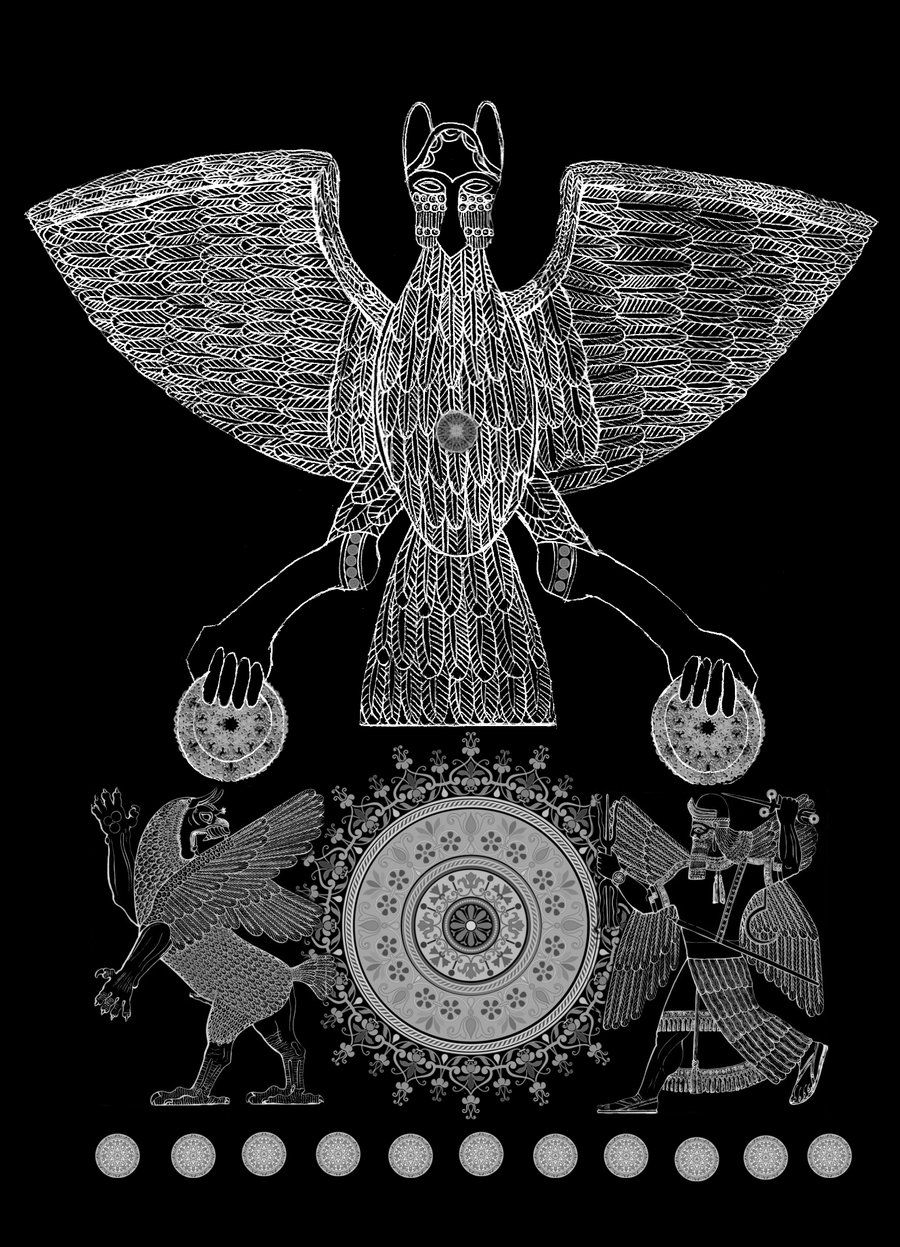 In this myth of ancient Babylon, Tiamat is a primordial goddess of the salt sea.  The particles of ‘Salt’ in this context are the atoms, which are initially without functions.  She is a symbol of the chaos from which order is derived.  In essence the symbolism and concepts are very familiar as we have Energy [water] in a chaotic state [Chaos, Ocean and sea] and Order then results [Spirit].  The myths depict Tiamat as feminine and in representations, show her as a sea serpent or dragon [Energy and Ouroboros].

Tiamat and Abzû, the god of fresh water [Spirit but of a different sort – having no atoms in it and thus representing the Creator and the Great Work] , join.  Abzu (or Apsû) initially fathers with Tiamat the elder deities Lahmu and Lahamu, the parents symbolically of Anu (Heaven) and Ki (Earth).  If one looks at the cosmic egg [see Map of Egg], this is the separation of the Inward and Inner courts from the Outer court, celestial from terrestrial, yolk and white.

Abzu (or Apsû) then fathers with Tiamat the younger gods [Intelligences, Intelligence hierarchy]. Abzû is symbolically male thus the combination of Tiamat and Abzû is in essence the [Mother and Father or Ultimate Intelligence].  These first gods are the symbolic personifications of the major systems of the universe  – the laws of attraction and repulsion, for example, the system of the winds and weather and so on.

In Greek myths, the idea of lower Intelligences taking over the task of creation from the levels above in the Intelligence hierarchy is symbolised by the idea of castration.  Castration is actually a more sophisticated symbolism than that employed in Babylon, as an Intelligence that has been castrated does not ‘die’ it simply passes on the responsibility for creation to its own lower order Intelligences, [children] at the same time becoming sterile – unable to have more children.

In contrast, in the Enûma Elish, the Babylonian epic of creation, after Tiamat gives birth to the first generation of deities; her husband, Abzû, realises the next generation are planning to ‘kill him’ and usurp his throne.  But his prediction becomes reality when he decides to make war upon them and is himself killed.

Enraged, Tiamet declares war on her husband's murderers, taking on the form of a massive sea dragon. She is then slain by Enki's son, the storm-god Marduk, but not before she had brought forth the monsters of the Mesopotamian pantheon.  The Enûma Elish states that Tiamat gave birth to dragons and serpents.  Now dragons and serpents are all symbolically representative of Energy and creative and destructive power.  These are the constellations – the ‘stars’, the Signs of the Zodiac [see the map]. 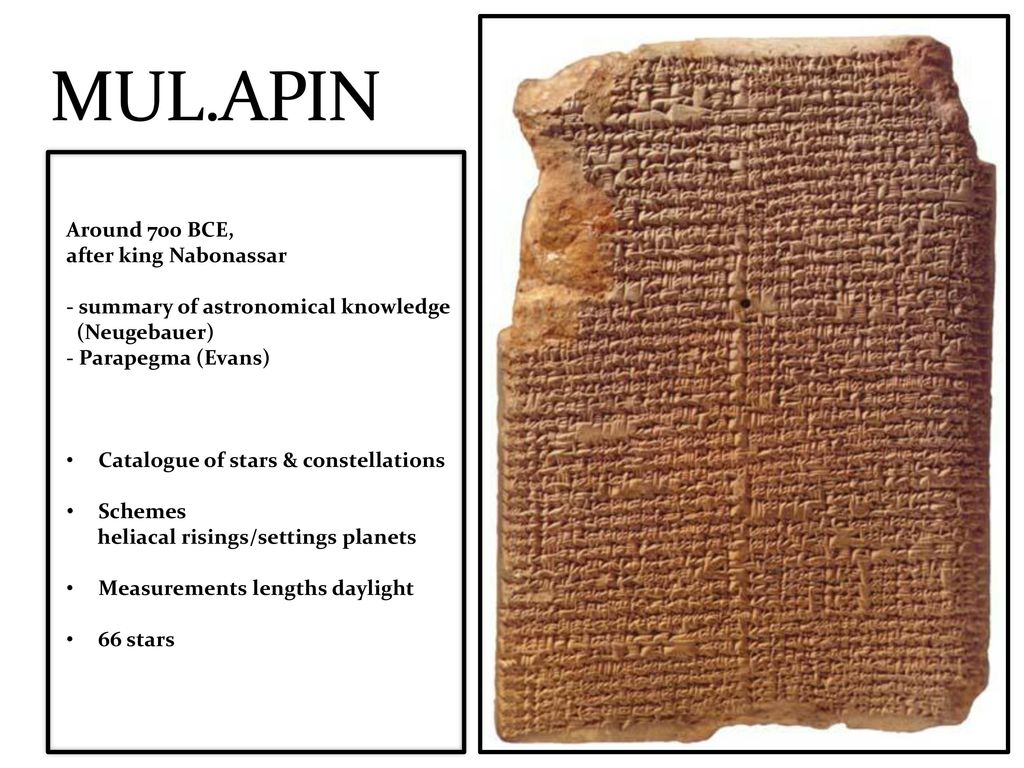 One of most significant star lists in Babylonian astrology is the MUL.APIN (lit. “The Plow”), which is believed to have been compiled around 1000 BC. It contains 71 stars and constellations as well as rising and setting times. The stars are also listed with the associated deity and in some cases, include a short epithet.

It is within the first of the two tablets comprising this star catalog that we find the list of stars and constellations which follow the path of the ecliptic.

Originally, there were between 17 and 18 constellations, but in later revisions, this number was reduced to 12 major ones. These same constellations were later borrowed by the Egyptians and adopted by the Greeks. The 12 Babylonian constellations remain relatively intact as the zodiac we know today.

The following is a list of the 12 surviving constellations of the Babylonian Zodiac as listed in the MUL.APIN.: 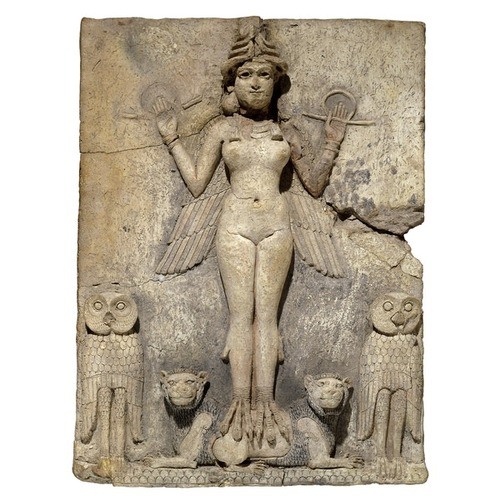 We have a large table that shows the correspondences – the different names - used to describe the same Intelligences, but if we extract from this table we can see that this is where Marduk – or Jupiter – becomes evident

Dr Peterson’s interest in this is the psychological one – the Planets are of course archetypes of Personality or at least traits of Personality and Dr Peterson is a psychologist by training.  The following comes from one of the transcripts of his talks and I have slightly shortened the talk where it duplicates the above.

So I'm gonna tell you a story and it's the story of Marduk and it's the Mesopotamian story and Mesopotamia is one of the earliest civilizations and it emerged as a consequence of the amalgam of Middle Eastern tribes over a very long period of time………..   Okay so here's the story. ………………………  So there are two primary deities to begin with Apsu and Tiamat.   ………………….

These give rise to children [planets] and those are the gods, now what do they represent ?

The gods  represent primary modes of being … so think about Ares or Mars the God of War, well that's  a representation of single-minded aggression and then you can think about Eros or Venus which is a primary representation of sexuality and love.  You might say well why are those deities?  Well that's simple, they live forever and they control you …. you know that when you're under the sway of anger you're not in control of yourself , and if you're under the sway of erotic possession you can make a fool out of yourself; you're a tool of the power that drives the continuation of the species forward.

We've conceptualized [each major drive]  as a Personality but those are transcendent personalities and they are eternal they're forever and so that's why the Greeks, for example, thought that human beings were just the playthings of the gods.

If you think about it sort of neural developmentally as well , out of nothing and nature emerges say the two-year-old.  The two-year-old is a battleground of primary motivational forces and something like that is being hinted at in the Mesopotamian creation story, the first progeny of the fundamental union of chaos and order , the absolute and time,  is the proliferation of these primary motivational forces.

Attraction and repulsion, laws of
System of the universe