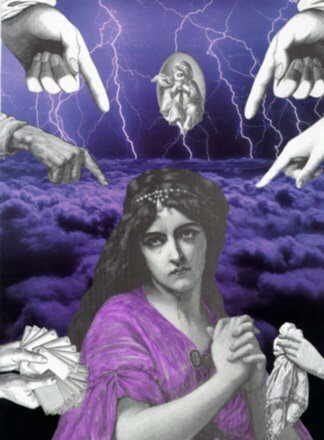 Thus conscience is essentially us, but the immortal soul telling us off.

The end result - the output as it were - may be appalling feelings of guilt and high emotion.  There may be remorse, and in extreme cases fear and madness, which then may become 'demons'.

And demons come back in our dreams, or they may re-emerge as hallucinations or visions.  Lady Macbeth knew this cycle all too well.

We may be someone with no apparent conscience, a person whose every act is golem like. Given that wisdom, conscience, bliss, divine love and inspiration all come from the Higher spirit, a golem by definition is not at peace, unable to be imaginative and has no sense of right or wrong – no inherent sense of ‘morality’. It functions to survive - a dog in a dog eat dog world.  But even a dog has to sleep.................

Nightmares of a ferocious kind may be the demons of conscience.  It is thus not actually possible to escape - Freddy Kruger lies in wait. 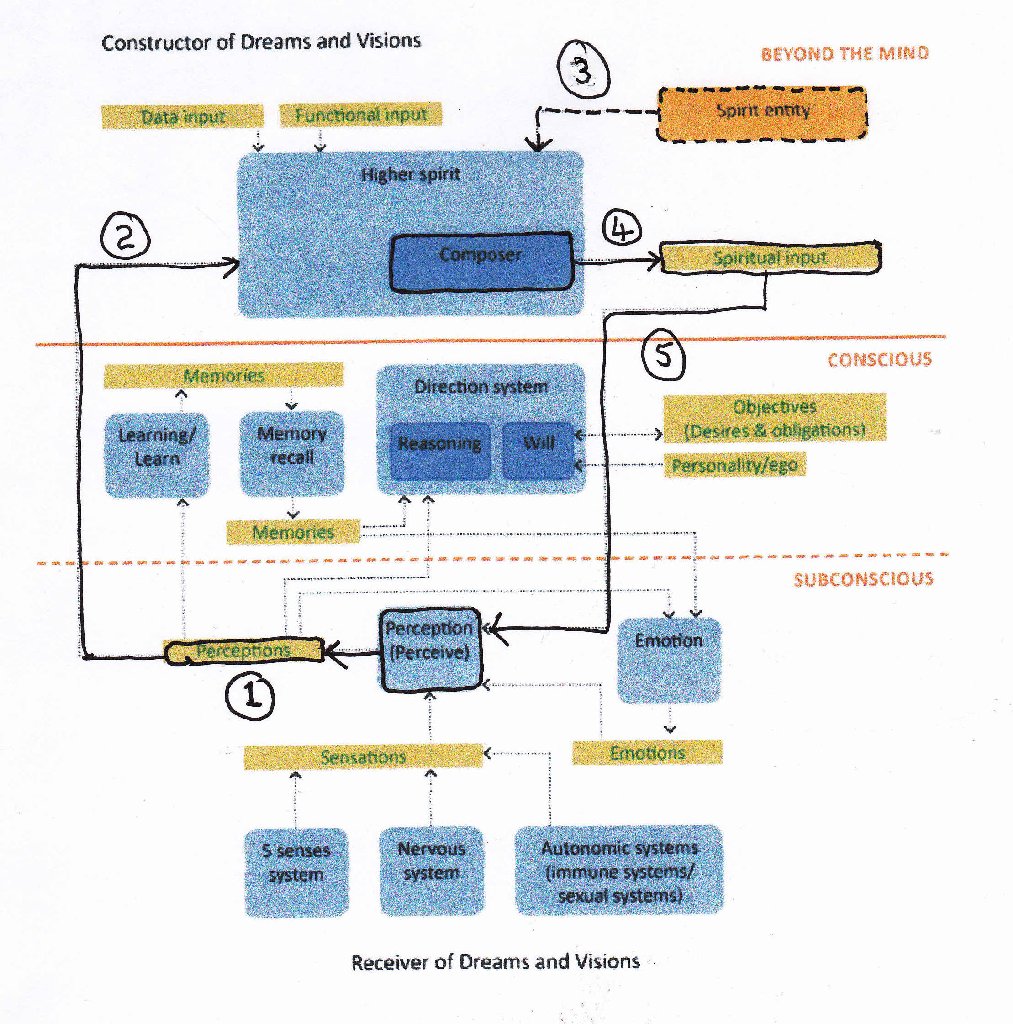 The thought in this case acts like a prayer – an unwitting evil prayer.  The person may be thinking about what they have done to someone – killed them, robbed them, lied in their research work so that a false result  ensues, fiddled their insurance claims, in essence any form of hurt and HATE, occasionally triggered by memory gets recorded in perceptions and off it goes along with all the other perceptions.  And the composer spots it straight away.  This thought then acts like a a trigger for the composer to start working.

What may also be being received are inputs from other spirit entities, including dead relatives that have been wronged, this is shown as a dotted line.  The type of experience is inter composer communication, but the input is simply information on hurt inflicted - demons inflicted on others - alive or dead.  If you have inflicted a demon on another person or creature, that demon is known by your composer.  In effect, your composer knows from the other composers what demons you have inflicted [spirit entity on the diagram].

Depending on how spiritually open the person is, the composer will then construct an hallucination, vision or dream (nightmare) that matches the severity of the demon it has detected.  It is worth remembering that not all demons are yours - ones you have created, some have been inflicted on you and you are getting due warning of the problem, but where memory tells you, you have inflicted hurt, then you are getting the nightmares you deserve!

The outcome is then fed back to the person in the form of the constructed nightmare, or vision or hallucination.  Even when the person is not at all spiritually open, they may still feel unease or apprehension, fear, guilt, or as they say 'something pricking their conscience'.

There is one other thing that can happen here and that is the denial of healing energy.  People get sick!  It would seem that this happens only after quite a long campaign by the Higher spirit to make the person see sense, but eventually the composer simply turns off the renewal energy supply and the person slowly and rather miserably dies.

The Greeks personified  any infringement of ‘Divine Justice’ by calling her Nemesis...

Ralph Waldo Emerson
This is the ancient doctrine of Nemesis, who keeps watch in the Universe and lets no offence go unchastised.  The Furies, they said, are attendants on Justice

Nemesis was the spirit of divine punishment against those who succumbed to hubris.  Nemesis was thus personified as a remorseless goddess capable of pursuing the perpetrator endlessly.  The name Nemesis is related to the Greek word νείμειν, meaning "to give what is due".

Hubris included acts which ‘offended or challenged the gods and their laws’.  It was considered the greatest sin of the ancient Greek world.  There was a long list of acts of hubris, but in essence the were acts of hurt and HATE.

Interestingly, the Greeks believed hubris was most evident in the public and private actions of the powerful and rich. 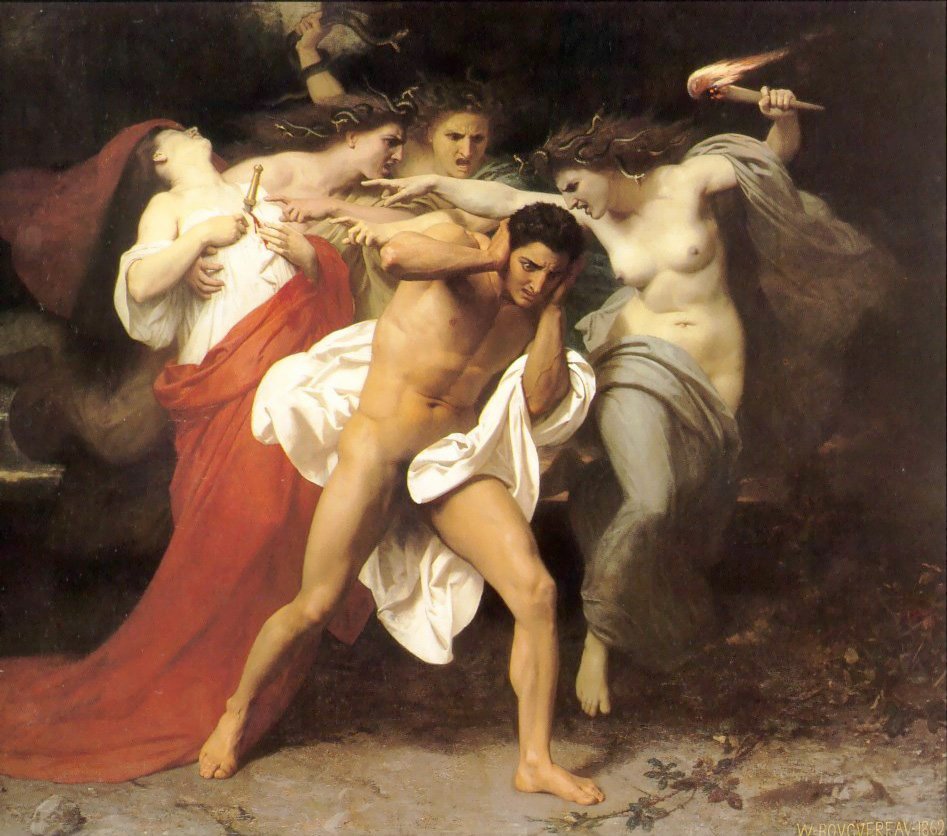 William-Adolphe Bouguereau - The Remorse of Orestes (1862)

The Furies known as the Erinyes, were responsible for punishing contravention of acts of hurt by one human being against another.  In Hesiod, they are named as  Alecto, Magaera and Tisiphone.  Whenever an act of punishment or vengeance occurs in Greek myth, the furies are invoked and their fury increases according to the severity of the crime.  The Furies represent a number of related activities/functions:

The Furies also had a role in ensuring the systems of the universe weren’t corrupted in any way – protecting the code to use the analogy; for example, Heraclitus declared that if Helios decided to change the course of the Sun through the sky, they would prevent him from doing so. They were also the persecutors of mortal men and women who broke ‘natural laws’.   One of the more intriguing qualities of the Furies was that they often had the effect of driving their victims insane.