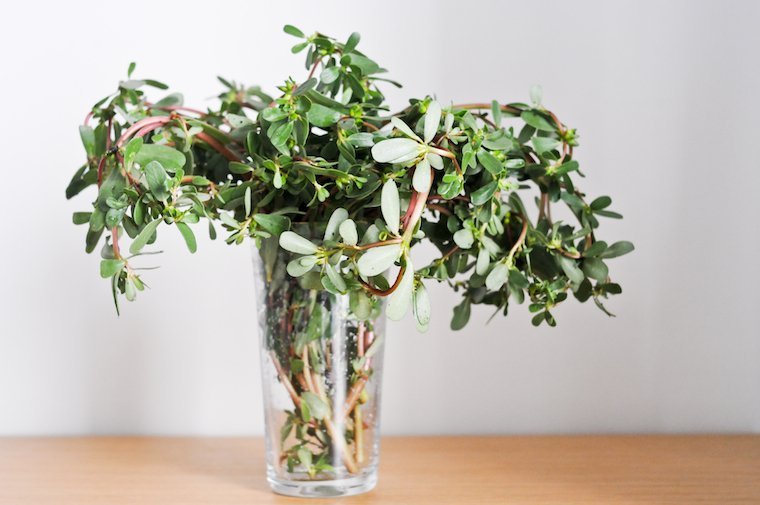 Portulaca oleracea is a succulent in the family Portulacaceae. A common plant in parts of India, purslane is known as sanhti, punarva, or kulfa.   It is known as Ma Chi Xian  in traditional Chinese medicine and indeed medicinally it is a very useful plant.  It is also very nutritious, as such it is the ideal plant - a healing food.

It has been used medicinally and as a pot herb for several thousand years and archaeobotanical finds are common at many prehistoric sites. Seeds have been retrieved from the Samian Heraion dating to seventh century BC and in the fourth century BC, Theophrastus named purslane, andrákhne (ἀνδράχνη), as one of the several summer pot herbs that must be sown in April.  In antiquity, its healing properties were thought so reliable that Pliny the Elder advised wearing the plant as an amulet to expel all evil (Natural History 20.120)!

A Potential source of confusion 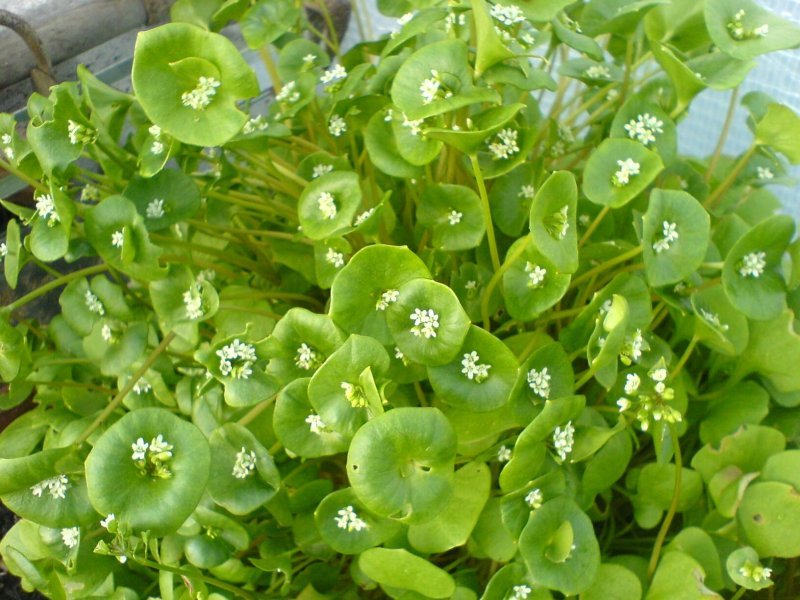 Purslane is a common name for several plants with edible leaves.  Within the Portulacaceae family of succulent flowering plants, Portulaca oleracea, is the specific plant covered in this section - a species of Portulaca eaten as a vegetable and known as summer purslane.  There is also an edible plant Claytonia perfoliata, which is known as Miner's lettuce or winter purslane.

There are other plants called Purslane with different properties.  The table below from Plants for a Future show all the other ‘Purslanes’ there appear to be.  The one in bold is the plant described in this section. 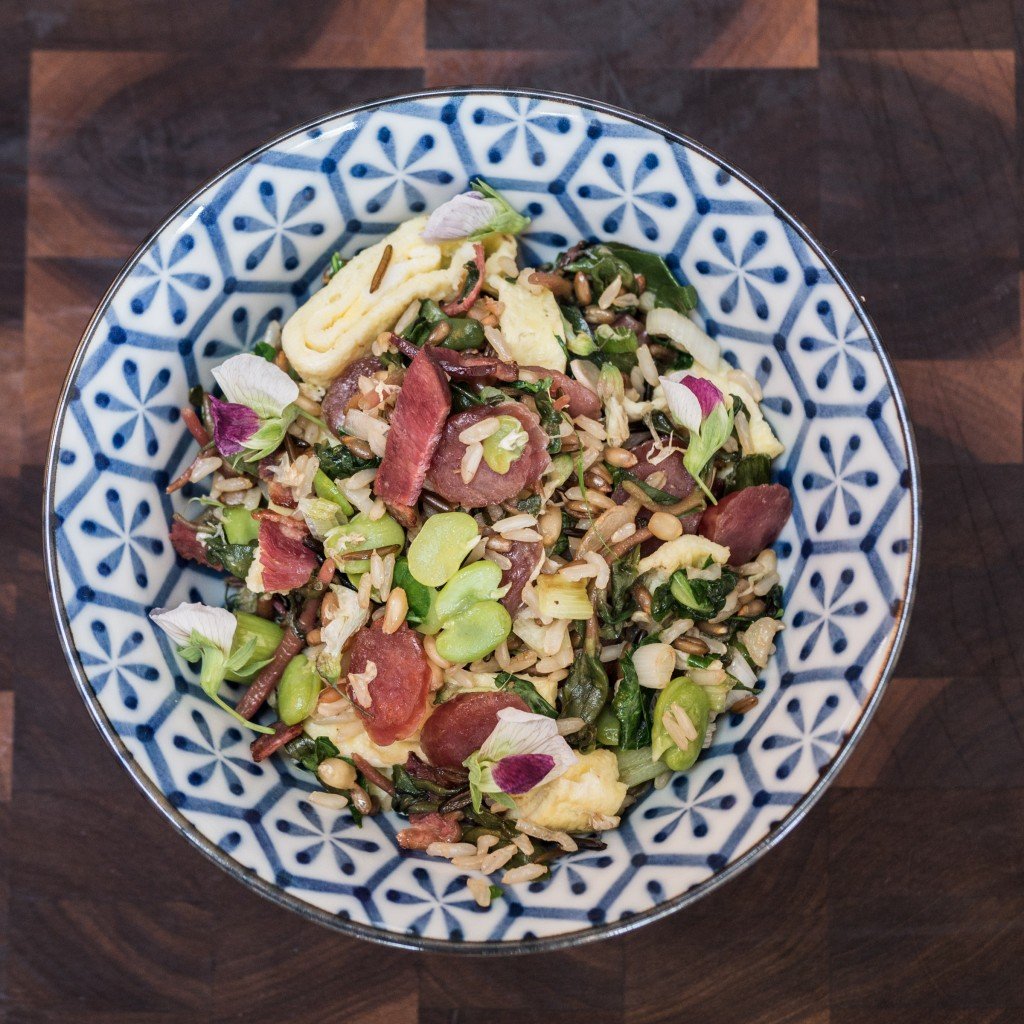 Portulaca oleracea sativa is an annual growing to 0.3 m (1ft) by 0.3 m (1ft).  It has smooth, reddish, mostly prostrate stems and alternate leaves clustered at stem joints and ends.

The yellow flowers have five regular parts and are up to 6 millimetres (0.24 in) wide. The flowers open singly at the centre of the leaf cluster for only a few hours on sunny mornings.  Worldwide, depending upon rainfall, the flowers can appear at anytime during the year, but in the UK, it is in flower from Jun to July, and the seeds ripen from Jul to August. The flowers are hermaphrodite (have both male and female organs) and are pollinated by insects.

Seeds are formed in a tiny pod, which opens when the seeds are mature. Purslane has a taproot with fibrous secondary roots and is able to tolerate poor, compacted soils and drought.

Purslane is found all over the world, throughout the Old World extending from North Africa through the Middle East and the Indian Subcontinent to Malesia and Australasia. The species status in the New World is uncertain: in general, it is considered an exotic weed, however, there is evidence that the species was in Crawford Lake deposits (Ontario) in 1430-89 AD, suggesting that it reached North America in the pre-Columbian era. It is naturalised elsewhere, and in some regions is considered an introduced weed. 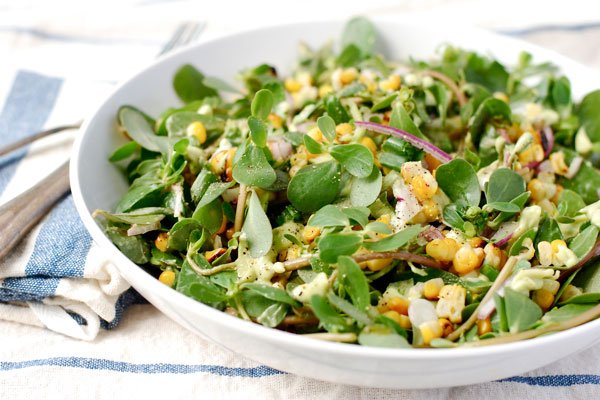 Portulaca oleracea sativa can be grown in both light (sandy) and medium (loamy) soils. It cannot grow in the shade.  A perennial plant in warmer climates than Britain, purslane is killed by frost, but can be grown as a half-hardy annual in temperate countries. It can become an aggressive weed in areas where the climate suits it.

It prefers moist but well-drained soil.  Plants will not produce good quality leaves when growing in dry conditions.

Outdoor sowings in situ take place from late spring to late summer, successional sowings being made every two to three weeks if a constant supply of the leaves is required.  Plants take about six to eight weeks to produce a crop from seed and can then be harvested on a cut and come again principle

As a companion plant, purslane provides ground cover to create a humid microclimate for nearby plants, stabilising ground moisture. Its deep roots bring up moisture and nutrients that those plants can use, and some, including corn, will follow purslane roots down through harder soil that they cannot penetrate on their own (ecological facilitation). It is known as a ‘beneficial weed’ in places that do not already grow it as a crop in its own right. 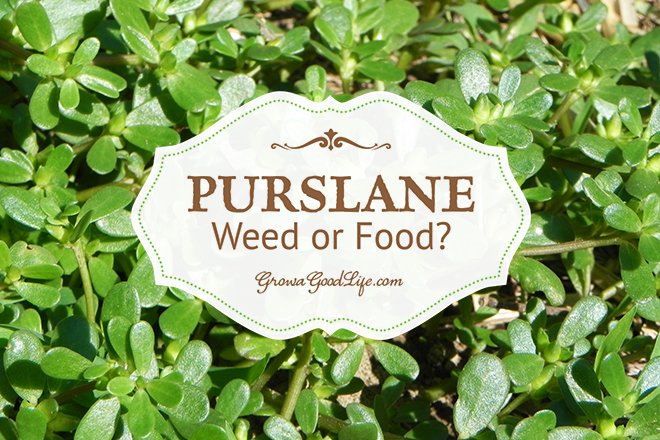 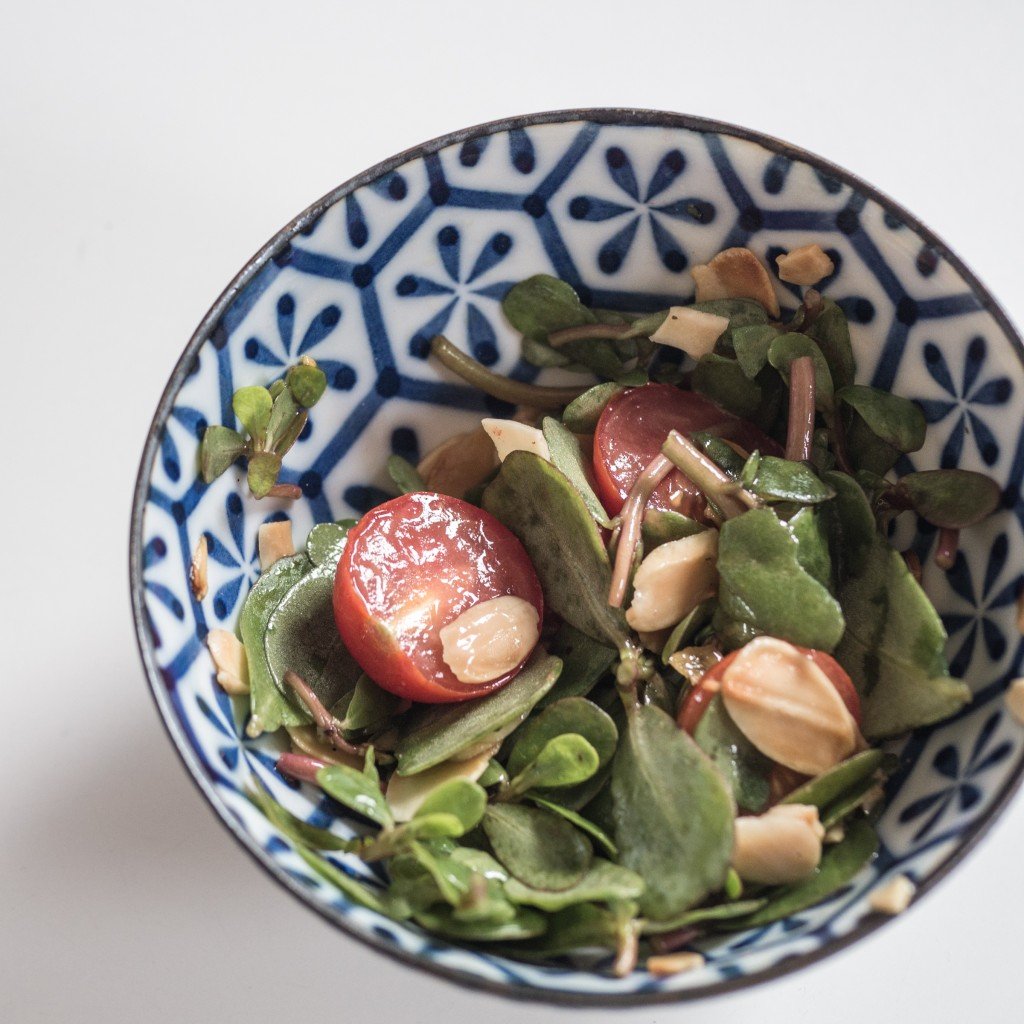 The stems, leaves and flower buds are all edible. Purslane may be used fresh as a salad, stir-fried, or cooked as spinach is, and because of its mucilaginous quality it also is suitable for soups and stews. 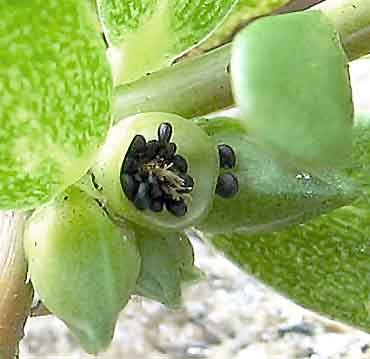 Australian Aborigines use the seeds to make seedcakes. In many other cooler countries, the plant does not produce enough seed to make this feasible, but in Australia the plants grow quite large and can produce 10, 000 seeds per plant, a person can harvest several pounds of seed in a day.

The Greeks call it andrakla (αντράκλα) or glystrida (γλυστρίδα), and use the leaves and the stems with feta cheese, tomato, onion, garlic, oregano, and olive oil, add it in salads, boil it, or add to casseroled chicken.

In Turkey, besides being used in salads and in baked pastries, it is cooked as a vegetable similar to spinach.

In Albania, known as burdullak, it is also used as a vegetable similar to spinach, mostly simmered and served in olive oil dressing, or mixed with other ingredients as a filling for dough layers of byrek. 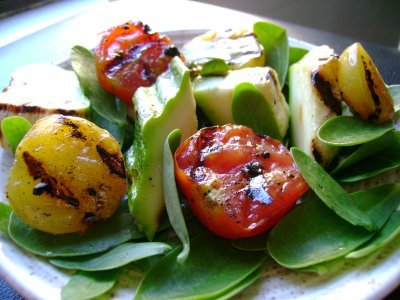 In the south of Portugal (Alentejo), baldroegas are used as a soup ingredient.

In Pakistan, it is known as qulfa and cooked in stews along with lentils like spinach or in a mixed green stew.

Purslane is an exceptionally nutritious plant.  The table from the USDA showing the nutrients in an American plant.  But the paper below also adds an extra perspective

Purslane (Portulaca oleracea L.) is an important plant naturally found as a weed in field crops and lawns. Purslane is widely distributed around the globe and is popular as a potherb in many areas of Europe, Asia, and the Mediterranean region. This plant possesses mucilaginous substances which are of medicinal importance. It is a rich source of potassium (494 mg/100 g) followed by magnesium (68 mg/100 g) and calcium (65 mg/100 g) and possesses the potential to be used as vegetable source of omega-3 fatty acid. It is very good source of alpha-linolenic acid (ALA) and gamma-linolenic acid (LNA, 18 : 3 w3) (4 mg/g fresh weight) of any green leafy vegetable. It contained the highest amount (22.2 mg and 130 mg per 100 g of fresh and dry weight, resp.) of alpha-tocopherol and ascorbic acid (26.6 mg and 506 mg per 100 g of fresh and dry weight, resp.). The oxalate content of purslane leaves was reported as 671-869 mg/100 g fresh weight. The antioxidant content and nutritional value of purslane are important for human consumption. It revealed tremendous nutritional potential and has indicated the potential use of this herb for the future.  PMID:  24683365 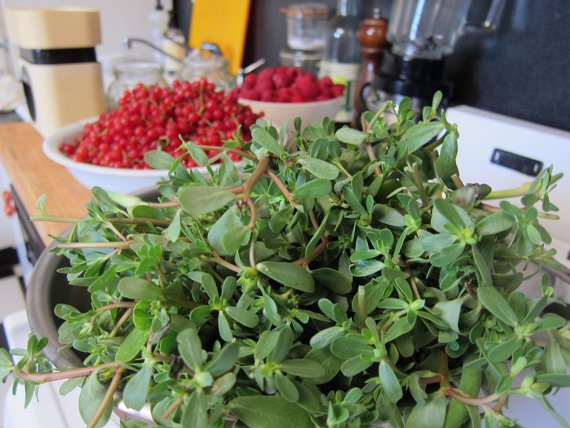 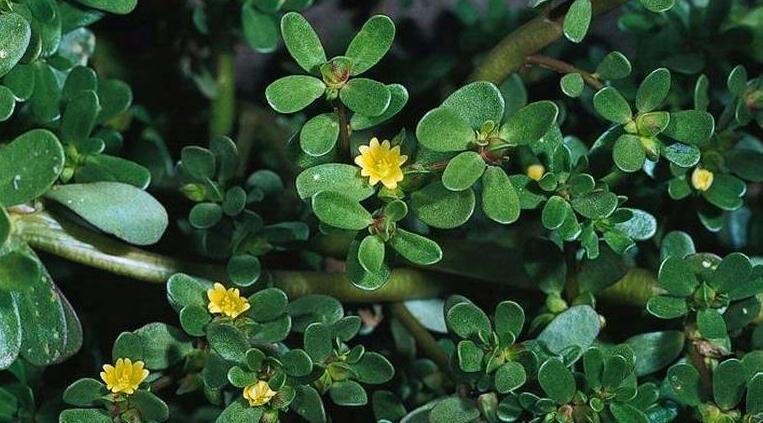