Chocolate and cocoa come from the Theobromo plant, the name of which literally translates to 'Food of the Gods'. The plant is found in only a few countries, for example, – the Ivory Coast, Brazil, Ghana, Malaysia, Indonesia and Nigeria. There are three main varieties of the plant 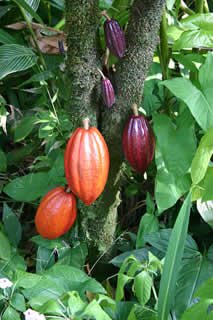 Chocolate and cocoa come from the beans of the plant, which are fermented causing the seeds to germinate. Thus chocolate is in reality a sprouted bean/seed that is then heated like malt. The seeds are then dried and roasted.

Edible chocolate in bar form was the invention of the Fry family in England, using the process invented by Dutchman van Houten to make cocoa, and then mixing it with sugar and cocoa butter. The Frys were Quakers as were two more families heavily involved in chocolate – the Cadburys and the Rowntrees.

And chocolate has healing properties.

I have provided a number of observations linking it to improvements in heart and circulation, cholesterol and so on, but there is also ongoing research on other effects,  for example, anticancer, cough prevention and antidiarrhoeal activities.

“Cocoa can protect nerves from injury and inflammation, protect the skin from oxidative damage from UV radiation in topical preparations, and have beneficial effects on satiety, cognitive function, and mood. ….Overall, research to date suggests that the benefits of moderate cocoa or dark chocolate consumption likely outweigh the risks”. PMID: 21470061

Although some studies exist linking it to obesity [because of the high fat and sugar content in some chocolate], the main risk is that you eat too much, because chocolate is addictive!

Babies and unborn infants are affected by a mum eating chocolate. Perhaps even more intriguing is that little girls react in the womb more than little boys – so perhaps chocolate should be more correctly called food for the goddesses! “The maternal ingestion of dark chocolate induces much more reactivity in female fetuses than in males. This finding supports the existence of an innate gender difference for the effects of chocolate, present even since the fetal period”. PMID: 23662674

DO NOT GIVE YOUR CAT OR DOG CHOCOLATE - The presence of theobromine renders chocolate toxic to some animals, especially dogs and cats.

Chocolate products undergo several processing steps e.g., fermentation and roasting, that decrease polyphenol content, and thus bitterness. In effect, the more cacao beans are processed to remove the bitterness the less 'healthy' they are. But if you can cope with the bitterness, the darker and more bitter the chocolate the better. [Reference PMID: 23792967]

In comparison with fruits and other natural products, it seems that chocolate packs more 'punch', earning it the label of a 'super bean'. “Cocoa powder and dark chocolate had equivalent or significantly greater ORAC [Antoxidant activity], TP [total polyphenol content], and TF [total flavenol] values compared to the other [products] tested. Cacao seeds thus provide nutritive value beyond that derived from their macronutrient composition and appear to meet the popular media's definition of a "Super Fruit". PMID: 21299842

The cocoa bean contains the following alkaloids and chemicals, all contributing to its effects [this list is not complete but I have concentrated on some key ones]:

Caffeine – but not in any significant amounts. A cup of chocolate contains about one eightieth the caffeine content of a cup of coffee

Phenethylamine - is similar to amphetamine in its action, so it has stimulant action; it releases norepinephrine and dopamine. But, when taken orally, it is rapidly metabolized.

Anandamine - is an endogenous cannabinoid neurotransmitter. The name is taken from the Sanskrit word ananda, which means "bliss, delight", and amide. Anandamide's effects can be either central, in the brain, or peripheral, in other parts of the body. These distinct effects are mediated primarily by CB1 cannabinoid receptors in the central nervous system, and CB2 cannabinoid receptors in the periphery. What makes chocolate especially fascinating is that it also contains chemicals that inhibit the natural degradation of anandamine in the body

Arginine  - is a conditionally nonessential amino acid, meaning most of the time it can be manufactured by the human body, and does not need to be obtained directly through the diet. The biosynthetic pathway however does not produce sufficient arginine, and some must still be consumed through diet. Arginine plays an important role in cell division, the healing of wounds, removing ammonia from the body, immune function, and the release of hormones. Arg is a nutritionally essential amino acid (AA) for “spermatogenesis, embryonic survival, fetal and neonatal growth”. Charles II knew all about this when he said

“the great use of chocolate in venery and supplying the testicles with a balsam or a sap...”!

Monoamine oxidase - MAOs play a key role in the inactivation of neurotransmitters, MAO dysfunction (too much or too little MAO activity) is thought to be responsible for a number of psychiatric and neurological disorders. For example, unusually high or low levels of MAOs in the body have been associated with depression.  This becomes key when one sees that chocolate contains serotonin and dopamine, it means it can give you the effects but also has the chemicals needed to eventually deactivate them

Theophylline - Its effects are thus highly complex because it affects the heart via the adenoside receptors but also has anti-inflammatory effects:

Theobromine - also known as xantheose, is a bitter alkaloid of the cacao plant . It is found in chocolate, as well as in a number of other foods, including the leaves of the tea plant, and the kola (or cola) nut.

In modern medicine, theobromine is used as a vasodilator (a blood vessel widener), a diuretic (urination aid), and heart stimulant. It is also a smooth muscle relaxant and relaxes the bronchial muscles, meaning it can help with asthma. The American Journal of Clinical Nutrition has noted that historically theobromine was used as a treatment for other circulatory problems including arteriosclerosis, certain vascular diseases, angina pectoris, and hypertension

In the human body, theobromine levels are halved between 6–10 hours after consumption

Magnesium – chocolate is high in magnesium

It appears that dark bitter chocolate, low in milk solids and as low as possible in sugar and fat is best healthwise. Milk proteins may inhibit absorption of flavonoids.