To earn his living, Von Stuck was mainly a painter of portraits in the Jugendstil prevalent in Munich at the turn of the century. But his symbolist paintings are quite special and deserving of much greater attention.

His artistic career spanned roughly 40 years from his 1887 work as a caricature artist, to his professorship at the Munich Akademie.

Born in the Bavarian town of Tettenweis near Griesbach in Lower Bavaria, Germany in 1863, von Stuck moved to Munich in 1878 for his art education and stayed there until his death. In 1897, he married Mary Lindpainter, the American widow of a Munich doctor.

Stuck was the son of a miller, but as a child he quickly became a gifted caricaturist. From 1878 to 1881 he attended the Kunstgewerbeschule in Munich, where he received particular encouragement from Ferdinand Barth (1842–92).

Von Stuck attended the Munich School for the Applied Arts after secondary school, transferring in 1881 to the "Königliche Akademie der bildenden Künste" (Royal Academy for the Fine Arts). The drawings he did for the portfolio 'Allegorien und Embleme' ('Allegories and Emblems'), published by Gerlach and Schenk in Vienna, made his reputation as an outstanding draughtsman as early as 1882.

He initially made his living by illustrating.  He produced cartoons for Fliegende Blätter, and vignette designs for programmes and book decoration. It was not until 1887 that he began to experiment with oil painting.

In 1889, he exhibited his first paintings at the Munich Glass Palace.  After being awarded the gold medal for the painting "Die Wächter des Paradieses" ("The Guardians of Paradise), Von Stuck devoted himself entirely to painting, becoming a portraitist who was much in demand.

Around 1890, Von Stuck turned to sculpture and produced a number of statues and statuettes. The first major work was the Wounded Centaur in 1890, then the Athlete in 1892. Around 1892, he became one of the founders of the Munich Sezession. At the 1893 'Munich Secession' exhibition, he showed "Die Sünde" (The Sin), creating a sensation.

In 1895, when still only thirty-two, he was appointed professor at the Munich Academy. His notable students included Paul Klee, Hans Purrmann, Wassily Kandinsky, and Josef Albers. Von Stuck also became a member of the board of 'Genossenschaft Pan', publishers of the art magazine 'Pan', for which he designed the cover.

The many prizes and honours awarded to Stuck included the Ritterkreuz des Verdienstordens der Bayerischen Krone (Cross of Knighthood in the Order of Merit of the Bavarian Crown), a distinction coupled with elevation to knighthood. Stuck was ennobled on December 9, 1905 and would receive further public honours from around Europe during the remainder of his life.

In the last phase of his work, Von Stuck concentrated once more primarily on sculpture.

The number of Stuck's pupils who achieved great success served to enhance the teacher's own fame. Yet by the time of his death, Stuck's importance as an artist in his own right had almost been forgotten.

In trying to understand something of von Stuck’s work, it might first be helpful to compare his work with Egon Schiele and perhaps Gustav Klimt.  Von Stuck is closer in style to Gustav Klimt in his use of eroticism and sensuality, but his intent is not dissimilar to Schiele.  All of them were attacking repression and distorted moral values.

Schiele was a traumatised man and thus his images represent that trauma, in contrast von Stuck had an extremely mischievous sense of humour and in the end he uses a form of humour to represent his culture and his time, to satirise and to parody the behavioural restrictions, beliefs and oddities of his time.  Along with key figures like Nietszche, another fighter in the war against hypocrisy.

All art reflects the culture and the time in which it is created. All art mirrors, it reflects, it exposes and characterises.  It throws back into our faces what we have become.  And von Stuck is reflecting Germany – the old Austrian/Hungarian empire with its sexual repression coupled with hypocritical immorality, its Catholic beliefs on ‘sin’, and ‘lust’ and ‘vice’ and ‘hell’.

And Von Stuck is satirising them, taking them to extremes so that sin actually appears to be rather an attractive proposition.

He marries supposed images of evil – the snake – with suggestions that the snake may be somewhat phallic.  Whereas Schiele shocked, von Stuck enticed and confused.

We know his pictures are spiritual because of his use of colours – darkness and light and the use of gold.  But darkness is the snake and the phallic male – his women are often pure and white and full of Light.  He is not being ‘clever’ and this is why it works, he is actually being subtle. 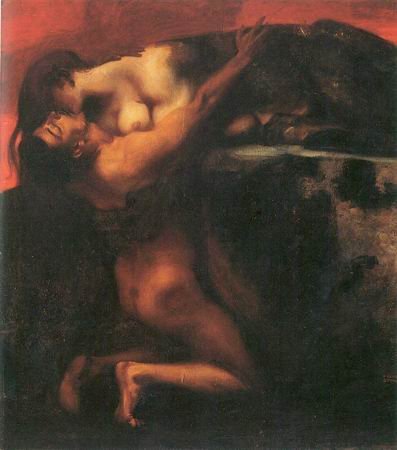 Stuck's subject matter was primarily from mythology, so he is able to use satyrs and fawns, nymphs and mythic scenes to depict sensuality in abundance.

Stuck's paintings were mentioned by Carl Jung, who wrote:

... Franz Stuck, whose snake-pictures bear significant titles like "Vice," "Sin," or "Lust". The mixture of anxiety and lust is perfectly expressed in the sultry atmosphere of these pictures...

Stuck paid much attention to the frames for his paintings and generally designed them himself with careful use of panels, gilt carving and inscriptions.  The frames must be considered as an integral part of the overall piece.  They are intended to be plain enough that they do not detract from the impact of the scene, but allow him to add words which will serve to batter in the message – this my fellow beings is lust – enjoy.

There seems to be little in biographies about von Stuck, on how innovative his techniques for painting were.

Even up to the 1950s and 1960s, the use of photographs was frowned upon in some schools of art.  If you were painting or drawing a person, the person had to be there.  I remember even then thinking how stupid this restriction was.

Our models grimaced from the pain and discomfort of having to stay in one fixed pose, and the result was unnatural and forced.  I used to wish we could use photos, where the spontaneity of an action or a smile could be captured and then reproduced and the personality of the sitter represented.

Well, in the winter of 1965, local architect Hans Joachim Ziersch made a fascinating discovery in Villa Stuck, the Villa he had bought for restoration. In the coal cellar of the bomb-damaged home, Ziersch found a basket stuffed with old photographs and sketches done on transparencies. Its fascination lies in the fact that von Stuck was clearly a very early user of photographs.  He had no compunctions about using this new technology in his work.  Workers found 95 large-format photos. After the initial discovery, the von Stuck photographs were handed over to the Stadtmuseum.  Eventually, more than 1,000 von Stuck photographs were tracked down.

He had a film developing laboratory in the villa's basement and he not only used the ones he took, but also ones taken by his wife.

The photographs of most significance are the portraits von Stuck used as a base for his paintings, adding his own vision to produce paintings full of texture and subtlety. They show that photography was a major help with his work.

Furthermore, the photos reveal that there was more to the man than the image he liked to present in his self portraits.

In 1897, after his marriage, Stuck began work designing his own residence and studio, the Villa Stuck in Prinzregentenstraße, Munich.   His designs for the villa included everything from layout to interior decorations; for his furniture Stuck received another gold medal at the 1900 Paris World Exposition.

The building, which Von Stuck, the 'prince of artists', erected as a monument to himself, is acclaimed as a supreme achievement of its kind in architecture. The furnishings of the Villa were awarded a gold medal at the 1900 Paris Exhibition.

Stuck lived there with his wife and daughter, Mary - born illegitimately to a baker's daughter in 1896 - until his death from a heart attack in 1928 [aged 65].

Franz von Stuck died on August 30, 1928 in Munich; his funeral address memorialized him as "the last prince of art of Munich's great days". He is buried in the Munich Waldfriedhof next to his wife Mary.

His wife, Mary, died 12 months later. The distraught daughter abandoned the villa and its works, and the house remained part of the von Stuck estate. Stuck's reputation languished until the late 1960s when a renewed interest in Art Nouveau brought him to attention once more. The Villa was purchased in 1965, and in 1968, the Villa Stuck was opened to the public; it is now a museum. 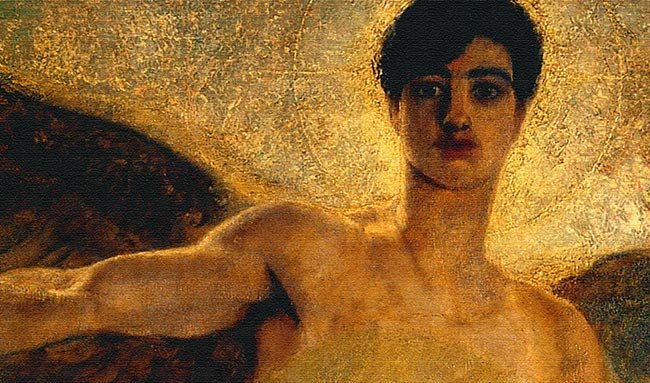