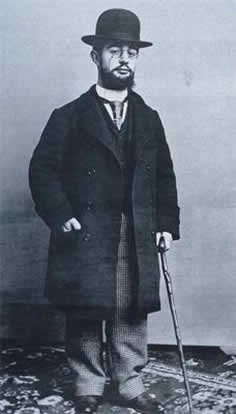 Henri de Toulouse-Lautrec (1864 –1901) was a French painter, printmaker, draughtsman and illustrator.  Throughout his career, which spanned less than 20 years, Toulouse-Lautrec created 737 canvases, 275 watercolours, 363 prints and posters, and 5,084 drawings.  His style is immediately recognisable, beautifully elegant in its simplicity and colouring.  His work is actually extraordinarily symbolic, though no one calls him a symbolist painter.  He excelled at capturing people in their working environment, the colour and the movement of the gaudy night-life, his people are almost reduced to cartoon figures, their personalities captured in a drawn snap shot. All his art was inspired, he did not have a moment of eureka or sudden awakening.

Toulouse-Lautrec was born to an aristocratic family. A younger brother was born on 28 August 1867, but died the following year.  After the death of his brother, his parents separated and a nanny took care of Henri. At the age of eight, Henri went to live with his mother in Paris.  In 1875, Henri returned to his birthplace, because his mother recognised his health problems. His mother consulted doctors in the hope of finding a way to improve her son's growth and development.

Although many doctors seem to attribute his problems to 'inbreeding' [Henri's parents were first cousins], to me he looks as though he had Crohn's disease brought on by the shock of his brother's death and his parents' separation, both of which would have compromised his immune system enough to mean that the viruses and toxins that cause this disease could take a hold. [Crohn's disease is associated with viral species from the enterovirus genus.  It is also associated with Mycobacterium avium subspecies paratuberculosis, the norovirus CR6 strain and chemical toxic damage[toxins].  Pharmaceuticals especially antibiotics are also implicated but as these weren't around in Lautrec's day we can exclude these].

Henri was artistically talented from birth and immersed himself in art. As an adult, he took as his subject matter the area around Montmartre, the area of Paris famous for its bohemian lifestyle and the haunt of artists, writers, and philosophers. He rarely left the area over the next 20 years. He initially studied and worked with Bonnat, then Fernand Cormon, establishing a group of friends he kept for the rest of his life.

He painted prostitutes, landscapes of Montmartre, the 'Moulin Rouge', and the garden of Monsieur Pere Foretin Montmartre, where Toulouse-Lautrec executed a series of pleasant plein-air paintings, some of  Suzanne Valadon his mistress, a red-head model who also appears in The Laundress (1888). When the Moulin Rouge cabaret opened, Toulouse-Lautrec was commissioned to produce a series of posters.  Among the well-known works that he painted for the Moulin Rouge are depictions of the singer Yvette Guilbert; the dancer Louise Weber, who created the "French Can-Can"; and the  dancer Jane Avril. Toulouse-Lautrec spoke English well enough to travel to London and whilst there he made the 'Confetti' poster, and the bicycle advert. 'La Chaîne Simpson'. 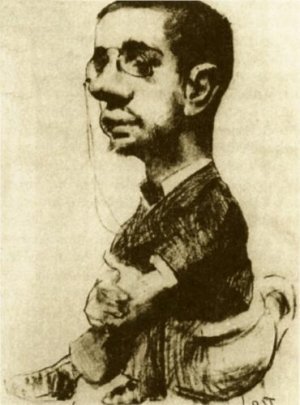 What was the source of his inspiration?  The story is one of tragedy.  He became an alcoholic.  The reason may have been a combination of the disease he had [if it was Crohn's disease, it can make you feel very ill] and his physical appearance, which led to feelings of dejection and rejection.  At first he drank beer and wine, then it was American-style cocktails, but his biggest tipple was absinthe.  The invention of the cocktail "Earthquake" or Tremblement de Terre is attributed to Toulouse-Lautrec: it is a potent mixture containing half absinthe and half cognac.

In 1893, Lautrec's alcoholism [or the disease he had] began to take its toll, and those around him realized the seriousness of his condition.   In 1899, his mother and some concerned friends had him briefly institutionalised. An alcoholic for most of his adult life, Toulouse-Lautrec was placed in a sanatorium shortly before his death. He died at the age of 36.

After Toulouse-Lautrec's death, his mother, the Comtesse Adèle Toulouse-Lautrec, and Maurice Joyant, his art dealer, promoted his art. His mother contributed funds for a museum to be created in Albi, his birthplace, to house his works. The Toulouse-Lautrec Museum owns the world's largest collection of works by the painter.

In a 2005 auction at Christie's auction house a new record was set when La Blanchisseuse, an early painting of a young laundress, sold for $22.4 million U.S.

Wikipaintings has a good selection of his works, follow this LINK

The paintings I have included are those that show some symbolic content or which are masterpieces of observation and thus good examples of pure or enhanced perception.