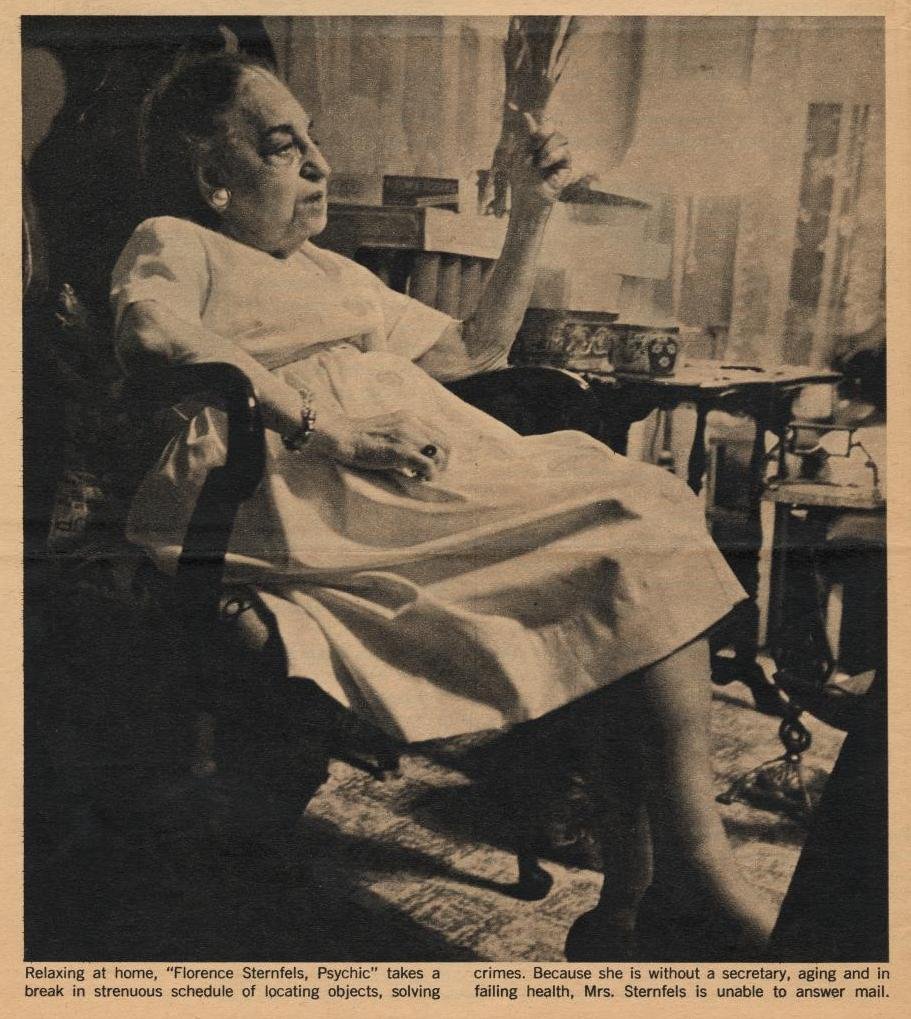 Florence Sternfels (March 2, 1889 - April 1, 1965) was a medium from the USA who became renowned in the United States for her success at finding lost people and lost objects.

By the time she was in her fifties, Florence presented a rather striking appearance being a little ‘stout’ and red haired.  She was a somewhat larger than life character.  Her gifts were and are not particularly unusual; at the time of writing we know of at least 3 mediums with the same abilities just in our city, but the newspapers got hold of her story and from there her fame spread.  Based in Edgewater, New Jersey, she was a ‘psychometrist’ for more than forty years.

It is not ‘acceptable’ these days for the police to admit they use mediums to help solve crimes or cases of missing persons, and there is a very distinct danger with the process, as many mediums have little idea whose mind they are reading; as such if a policeman with some knowledge of a case goes to a medium, it is extremely easy for most mediums to replay the policeman’s knowledge, without either of them realising it is happening.  But if the protocols are correctly followed – no direct contacts between medium and police and the use of a bridge which has not been heavily 'corrupted' by being handled after the crime, mediums can operate quite effectively from a bridge. 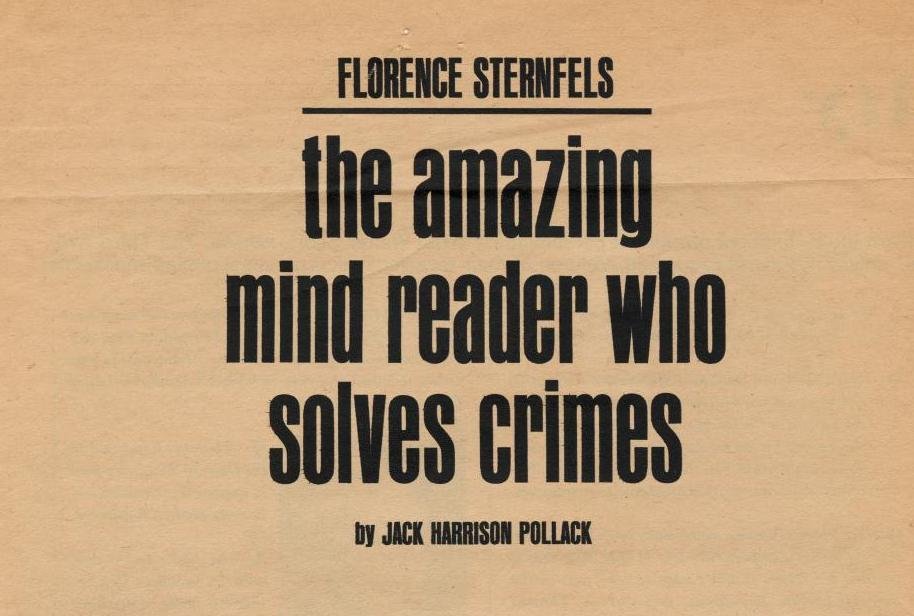 According to the American SPR, in 1964 Edgewater's Police Commissioner John A Nash stated, "Mrs Florence Sternfels (the psychic-medium) has helped police in New Jersey for over thirty years". And Captain John Cronin of New York's Missing Persons Bureau stated, "I've known Florence Sternfels twenty-five years. She is right seventy-five percent of the time."  Seventy five per cent is actually a pretty good hit rate considering most of the cases are unsolved and therefore extremely difficult, with old evidence that may have been extensively handled in the meantime.

Florence had a somewhat similar reputation in the USA to Gerald Croiset who was based in the Netherlands, but Florence was not quite as gifted, although Jack Harrison Pollack in his biography Croiset the Clairvoyant said she “resembles Croiset in her public-spirited attitude toward her work”.

"Many people are like squirrels," she chuckles. "They hide their things and forget where."  A warm-hearted, colourful woman, Florence is outspoken when she thinks a consultant deserves bluntness. An exasperated businessman once shoved his deceased brother's picture at Florence, ordering her to make it snappy about locating the bank accounts which his "miser" brother had concealed. "I was so annoyed with him that I refused to tell him any of my impressions," she recalls.

But, like Croiset, Florence is immediately sympathetic to less greedy persons with honest losses. Recently she found U. S. Government bonds for a member of the New York City Board of Education; located the misplaced chapters of a book being written by a New York psychiatrist; identified the spot where a New Jersey factory-worker's stolen car had been abandoned; told a Connecticut woman where she had misplaced her dentures one evening when this woman was feverish.

"I remember a young redheaded wife who was sorry she visited me," recalls Florence. "She had mislaid $1200 in cash and traveller's checks. She was angry and frightened, and screamed that she had to find them. I told her where they were, then talked to her woman to woman: 'You're planning to leave your husband, aren't you, dearie? Think it over first.'

She ran out and drove away. She found her money, then needled me over the telephone, 'I'm staying home because even if I leave, my husband would come to you, and you'd only tell him where I was. I hate you, Florence!"'

One evening recently I suggested to Florence, "You remind me of Croiset in some ways. You ought to visit Holland to be tested by Professor Tenhaeff." Laughing uproariously, she retorted, "Why, I can't even afford to go down to North Carolina to be tested by Dr. Rhine."

On February 18th, 1950, Dr. Rhine wrote Florence asking her to explain, ". . . the way you discovered your ability and something about the way it is used." On March 18th, 1954, Dr. Rhine again tried to investigate Florence by mail. But Florence, an earthy extrovert, prefers to be studied in person.


But no parapsychologist will ever have that chance as Florence Sternfels suddenly died at age 74, before anyone really got to know her story.

We have provided only one observation simply because it has been extremely difficult to get any first hand evidence, as opposed to authors who have used the work of other authors and so on.  Even the observation we have provided is lacking in support, such was Florence – she just wanted to carry on with what she was good at.

Florence is included in The Blue Sense: Psychic Detectives and Crime by Arthur Lyons, and Marcello Truzzi, (1991)