The Reverend William Stainton Moses (1839-1892) was one of the pioneers  in the movement towards Christian Spiritualism in the United Kingdom.  He was a gifted medium and a leading member of the BNAS (British National Association of Spiritualists), as well as being vice-president of the Society for Psychic Research.  He launched the London Spiritualist Alliance which later became the College of Psychic Studies.

After being ordained and working in the Isle of Man and Dorset, his poor health caused him to cease his duties, whereupon he went to London and took up the post of teaching the son of Dr Stanhope Speer and his wife; he also taught at University College School until 1889. It was in 1872, through the reading of Robert Dale Owen's The Debateable Land, recommended to him by Mrs Speer, that his interest in the subject of Spiritualism was kindled. This prompted him to visit mediums, including D. D. Home. On one occasion, Moses exposed a fraudulent medium, “an indication of his desire for genuine phenomena”. 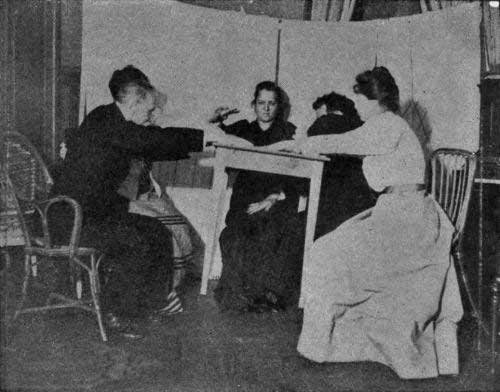 In due course, Moses developed his own mediumship, and in mid-1872, he sat in a circle with Dr Speer, Mrs Speer and sometimes, other persons. In the early stages, the circle experienced raps and table movement that responded to sitters' inquiries. Later on, there was the occurrence of communicators making themselves known and the levitation of various objects. This was followed by the manifestation of apports and fragrant odours. On 30 August 1872, Mrs Speer recorded not only the apports, but the levitation of Moses; later that same year, Dr Speer also testified to Moses being levitated and the movement of objects.

It was the event on 22 August 1872, that was momentous: on that date, Moses began to produce automatic writing during a seance. In the following month, 'direct writing' was produced, i.e. paper located under the table was found to have 'Imperator' written upon it. On 19 December, the control calling himself Imperator, spoke for the first time by direct voice. These led to Moses' Spirit Teachings (published in 1883). 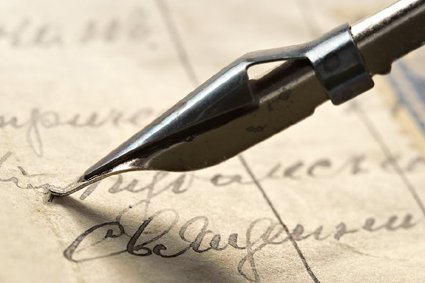 By the time of his death, Moses had composed twenty-four books containing information given through automatic writing from March 1873 for the following ten years, four that pertained to physical phenomena between 1872 and 1875, and three of a summary nature.

F W H Myers of the SPR confirmed that in the case of the first category of books, he searched them carefully for any sign of confusion or alteration, but without finding any.

Moses was able to read a book or occupy himself with something unrelated to the communications when the automatic writing was produced; in these periods, the writing was not affected by Moses' distractions.

There can be no doubt that Moses found the teachings imparted by the communicators to be disconcerting: his writings show his own immense struggle with what was said, this being diametrically opposed to the Christian faith that he once expounded as an Anglican clergyman. Moreover, they exhibit his determination to verify that the communicators were actual persons. Wilson notes how Moses 'argued long and bitterly, attacking the "spirit teachings"', but the communicators 'refused to budge an inch'.  In view of the identities claimed by some of the communicators, i.e. well-known historical personages, Moses was aware that this would be more likely to attract ridicule than provide weight to the communications; he therefore did not reveal who they were, and this information only became known after his death. “ 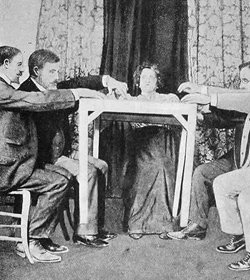 It would be interesting to know who they really were, names are meaningless when it comes to inter composer communication between bodied souls.

Moses' mediumship continued to develop and in June 1873, he recorded what was seen by those present:

Large globes of light...went into the room where the sitters were placed...They were sufficiently bright to...cast a strong reflection into the room....

Mrs Speer described the occasion of when:

many beautiful spirit lights appeared..some were very large...Musical sounds then came around us. Both rooms were often quite illuminated through the brightness of the lights. 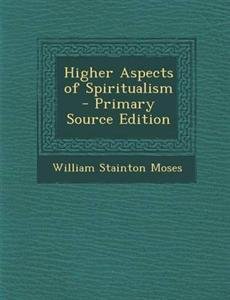 Moses also underwent OBEs; in one that took place at the beginning of 1874, he became separated from his physical body and was met by one of his spirit helpers. He described how 'the scenery through which I passed was like an earthly landscape, but the air was more translucent, the water more clear and sparkling, the trees greener and more luxuriant'; on arriving at a 'simple cottage', he was temporarily reunited with his grandmother. Moses also recounted an OBE that included a meeting with Imperator. Of this he said:

It was Imperator, as I have before seen him...The face was earnest, benevolent and noble in expression...The whole effect was so dazzling that I could not look steadfastly at it.

At the end of 1872, Moses recorded how during a seance, the Speers saw a light, although he saw a person within this and as it faded from sight, Moses asked who this was. In Imperator's style, 'Myself' was rapped out in reply.  From March 1873, the sounds produced were like that of many types of instruments, including a harp. These became so loud that they vibrated the table and could be heard in other rooms. Moses noted that:

The sound would traverse the room and seem to die away in the distance, and suddenly burst forth into great power over the table...The sounds were at times deafening. 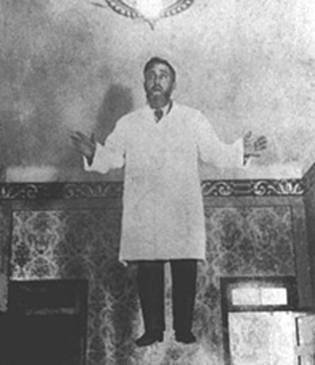 As so often happens, tests conducted demonstrated a significant change in temperature during the seances.

Not only were the seances sometimes rather noisy, events did not always proceed smoothly: on January 25, 1873, Moses recorded how after the table was levitated to head-height, the sitters requested that something be brought in from another room in the house. A heavy bronze candlestick was produced, and Moses complained that it 'struck me heavily on the head, and hurt me considerably...'.

Where did all these gifts come from?

Frank Podmore, who was hardly an ally of Spiritualism, with regard to the fashionable suggestion that Moses was mentally unstable, had to admit that Moses showed ‘no signs of undue abnormality’.

But he did have ‘persistent ill-health’ and he died in 1892 through Bright's disease.  Bright’s disease is a kidney disease often caused by Vitamin D deficiency combined with a diet with high levels of oxalic acid.

Please note that all observations collected by him as well as his own experiences have all been listed under him, for both ease of reference, but also because even if the experience is of someone else he was often involved in the experience appearing at times to act like a bridge.

In this part of my work I must claim indulgence if I do not give names and facts at length in every case.  I pledge myself to the exact accuracy of every statement I make, and I will gladly satisfy any private enquirer respecting any case, if I can reasonably do so.  But I am holden from the publication of names and addresses in some cases by the knowledge that friends of the departed are still surviving, and that I must respect their feelings.  I have no right to invade the sacred privacy of the memory of their dead, even in such a cause as that of the demonstration of what is loosely called immortality.

History has been very harsh on Stainton-Moses. He is now being called a fraud, but I do not think this is true, I think he was a genuine medium, but extremely gullible. I also think he embellished a great deal in order to deliver a religious message.  It may be helpful to read the observation entitled 'Mind reading' first, to get some background on the rest of the observations.  The rest of the observations are accompanied by some background information for each which perhaps puts a slightly different interpretation on them than the conclusions he reached.  The problem with the religious, is that they want to believe and can be manipulated to distort the truth.

Spirit Identity – William Stainton Moses
The buffoonery that passes current in the public mind for Spiritualism; the fraud and folly that besmirch it; the unclean things that get mixed up with it; the vagaries of the unbalanced minds that are inevitably attracted to a new and fascinating subject; these things I deplore, but contemplate without dismay.  They are ephemeral and will live their little life and die.  Born of human ignorance, nurtured by human folly, they will yield to advancing knowledge and increased sense of responsibility, when the true moral significance of the subject is recognised among us.