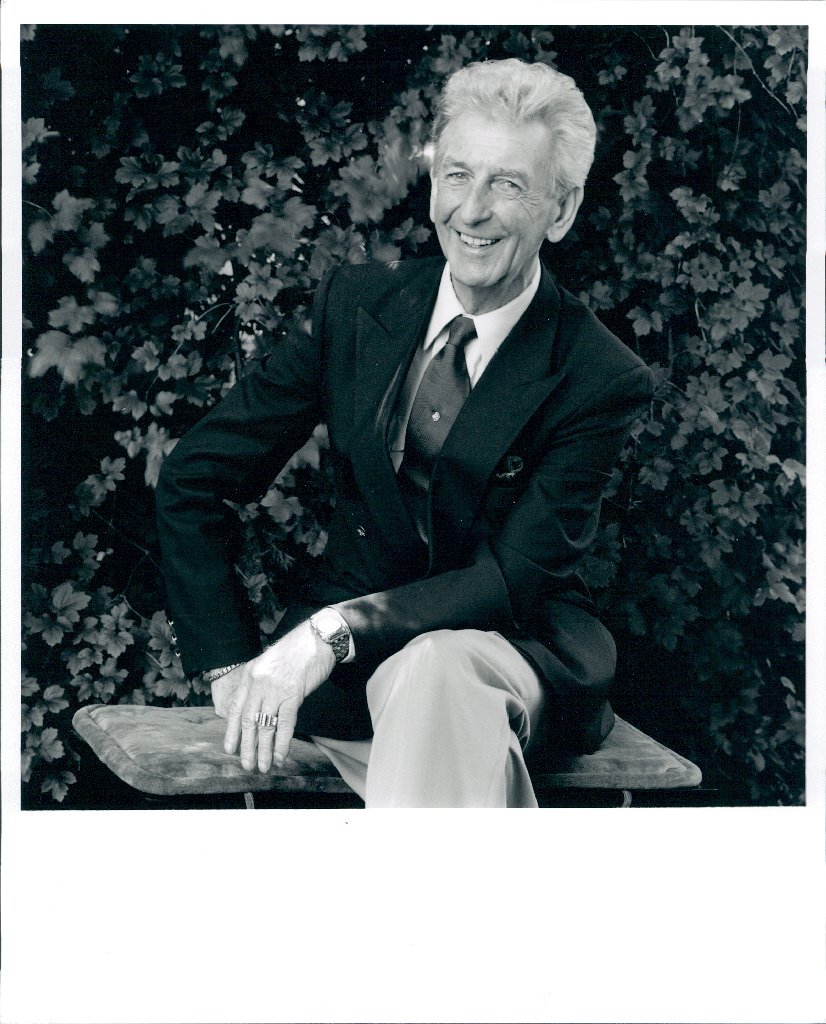 Jack Schwarz (1924 – 2000) was a Dutch born healer, teacher, naturopath (he had a Degree N.D. in naturopathy from the School for Heilgenees Kunde in Amsterdam), and a magician, whose skills revolved around the ability of man to use their minds to control their body, both in being able to perform bodily functions that might normally be beyond the capability of an ‘average human being’, but also in being able to manage pain and promote self-healing via the mind – the will.

Very early on when he was a small child, Jack found he could levitate and by aged 9 he found he had the ability to heal and see the aura.  Jack's range of vision exceeded what is normally considered to be visible light. As a consequence, he saw the aura – the energy fields which surround every organic body – and was able to describe the physical, emotional, mental, and spiritual conditions of people, and the degree to which they used their unique energy potential.  By 1941, Jack had mastered hypnotism and had developed a much better understanding of how the mind can influence the body.  In March 1943, using his new skills he became a "fakir", using a bed of nails, needles, dancing on swords, and holding live coals.

with Lois his second wife and
helper in the
Aletheia Foundation

Eventually, Jack became an internationally-recognized authority on voluntary ‘mind control’ and ‘human energy systems’. He was a subject, researcher, and consultant at a number of biomedical and life science research centres in the United States and Europe.   He also lectured and taught extensively, and published nine books.

Schwartz was the co-founder in Sept. 4, 1958 of the Aletheia Foundation.  The Aletheia Foundation is a non-profit organization dedicated to self-health research and education. Aletheia's programs aim to ‘synthesize the findings of science, and the revelations of spirituality’.

Initially Jack sought some sort of meaning and understanding for his gifts within established religion.  Finding the Dutch Reformed Church ‘joyless and hypocritical’, he started to attend Catholic church services from about the age of 14.  In March 28, 1951, he married Hermina Oostenbroek (divorced 9/8/75). His first son was born, Feb. 1952, his second son, Oct. 1954, and his third son, Oct. 1956.  In 1954, Jack became a Catholic, and Jack, Hermina, little Jack and baby Rob were all baptized in the Catholic faith.

But, after Schwartz had emigrated to the USA, he became disillusioned with the Catholic Church there.  It offered no real explanation of how his gifts worked, or even any support for what he could do.  As many people over the years have found, there are a considerable number of priests in the Church who also consider gifts such as this ‘demonic’.  And so, when in March, 1958 the couple had a fourth son, Eric he was not baptised a Catholic. Neither was their first daughter, Charlene, born Aug. 19, 1962.

Eventually, Schwartz worked out his own methods and understanding of how it worked and ultimately he came to the same conclusions as we have done, that much depends on Squashing the big I am [the ego] in order that control can pass to the Higher spirit.  Schwartz believed in the three worlds – described under our Model of the Mind.  In all his feats he was able to move his centre of consciousness from his ego self [his Personality and thus his conscious self], to his higher self his Higher spirit.

Results of tests performed on Jack documented his abilities to self-regulate many psycho-physiological processes of his body. By voluntarily attaining specific brainwave states, Schwarz scientifically showed how to control the pain of physical trauma, regulate blood flow, blood pressure, and heart rate; heal his body within hours after it was injured, and be unaffected by toxic substances injected into his body. 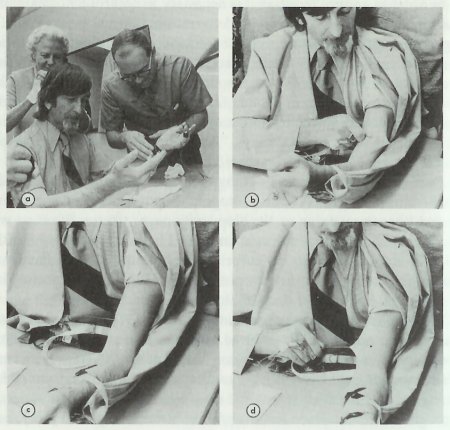 We first met this sweet, joyful man a couple of decades ago, at a Unity church in Honolulu, where he presented a guest sermon and a follow-up workshop. We attended both, and then undertook a private session with him. At the time, we could ill afford to pay for the workshop or the private meeting, but, as fledgling seekers, we knew we could ill afford not to!  Consider these reports of that encounter:

In the years since that first meeting, all of our exchanges with Jack Schwarz were similarly extraordinary. And many others report similar extraordinary experiences with this remarkable man.

Jack Schwarz  was born on April 26, 1924 as Jacob (Jack) Schwarz to Bertus Schwarz and Magalena Stiegelis in Dordrecht, The Netherlands. He had one sister, Neeltje, born June 9th, 1920.

After Jack's birth, his mother developed tuberculosis and Jack and his sister were placed in a foster home for a short time because of their mother's health. Nel and Jack were then taken care of by a nurse from the Salvation Army, Sister Bennington, ‘who taught them about real love’.

In April 9, 1940, Jack left school and took his first job at C&A Brennerkmeijer, one of the biggest clothing stores in Dordrecht, as a window dresser.  But the post was short lived as in May 10, 1940, the Germans invaded Holland.  The Dutch did not ‘fight’ as such in the war with an army, as such he was not ‘called up’, and from 1940, he attended the Textile Engineering School, in Dordrecht.  But he did become part of the resistance movement, delivering news releases after curfew. Known as "John", he also helped to find safe houses for the Jewish population.  But in June 5, 1943 he was discovered and sent to forced labour camp in Hamburg, Germany. Whilst there he was tortured for being in the resistance movement and a ‘spy’.  The torture resulted in him having ‘a mystical vision of Christ on the Cross where he realizes that you cannot hate but only love unconditionally’.

According to his own biography, in Dec. 29, 1943 he was sent back to Holland by the Germans to become an informant, but instead became an underground double agent known by a few as K9.  Unfortunately this did not last long as he was again discovered and in Sept., 1944, he was picked up by the Gestapo for spying and sent to Sachsenhaus the prison camp in East Berlin known for ‘brick making and lamp shades made of human skin’.

In October, 1944, he escaped by digging a tunnel out of the camp and with 2 other prisoners, managed to walk to the British Polish Army at the border and becomes part of the Royal British Army, where he was ‘sent to Alduchink [sic], Great Britain for training’. [I think it should be Aldershot, but there is no way of checking this as Jack is dead now].

Jack learnt English during his time in the UK and in May 5, 1945, he was part of the liberating forces officially attached to The First Canadian Lines of Communications stationed in Maastricht. Jack then transferred from the Royal British Army to the Royal Dutch Signals, located in the Hague, acting as a Motor Transport Officer.

During his time in the Dutch signals he had a bad motorcycle accident, - a compound fracture of the ankle - and although he was sent to Indonesia to become a welfare officer (sergeant), his foot did not heal properly and he was sent back early to Holland on a hospital ship.

The last week in October I found myself visiting for the second time (1990 was the first) the 15th Reunion of the Dutch Batavia-Indonesia forces of 1946-1950 in Ede, The Netherlands.  For the last six years I have been working on my husband's fascinating life story with the title of "The Man of Tomorrow." After being in the Dutch Underground during World War II, my late husband, Jack, and 120,000 Dutch soldiers were sent to fight in Indonesia. The Dutch controlled Indonesia before the war and, after the Japanese retreated, they fought to regain control and keep a Communist leader from taking over -- much like our Vietnam War.

After the war in Holland, Jack had a number of different jobs -government employee, personnel manager, fire and safety inspector, retail-sporting goods sales, interior designer and antique dealer.  But during much of the early fifties he had an evening stage act as ‘Fakir Noiro’, which he combined with his day jobs.

In March 13, 1957, Jack emigrated to the USA, ‘with $35 in his pocket’.  Initially without a job, he eventually found work with the Texaco refinery in Long Beach, CA. Again numerous  jobs followed – for example as a salesman with the Union War Surplus Store, San Pedro, CA.

But on June 8th, 1957 , Jack gave his first bed of nails, etc., demonstration announced as Prof. Noiro's World Famous Mystic Show!  Eventually Jack appeared on TV in shows such as the Regis Philbin TV Talk Show in San Diego and the Steve Allen Variety Show. Steve Allen made the statement that in 20 years that "many people" would have the same abilities as Jack.

The Menninger Foundation and other research 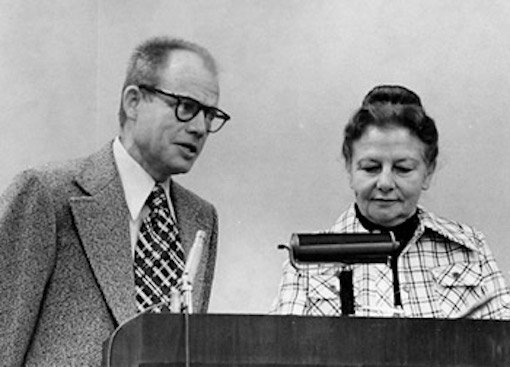 The Greens - Drs Elmer and Alyce

The Foundation was interested from an early date in the ability of the mind to control bodily functions.  In the 1960s, for example, the Menninger Clinic studied Swami Rama, a noted yogi, specifically investigating his ability to exercise voluntary control of bodily processes (such as heartbeat) which are normally considered non-voluntary (autonomous). Much of this work was carried out under the auspices of Drs Elmer and Alyce Green, the former holding a Ph.D in Biopsychology and the latter holding degrees in psychology.

Dr Green later wrote of his experiments in the book Beyond Biofeedback, which documents their experiments. Through a shared interest since youth on the farther reaches of human ability and understanding, they embarked on a scientific quest to understand how human kind could learn to control bodily processes which were seen as involuntary.  Abilities like  being able to raise the temperature of the hands, lowering blood pressure, lowering heart beat, changing brain waves to ones more conducive to states of creativity and more.  All of this was achieved by the utilization of the informed will with the aid of machines which were designed to give the person utilizing it feedback of what it was they were doing.  Something as simple as the temperature of someone’s hands could be monitored and shown to the person via a machine with a meter so that they could get direct feedback on what was going on in real time and then attempt to change the readings given by the machine through certain methods.  This is biofeedback.

At the Menninger Foundation, Schwartz demonstrated the power of the mind over the body (matter), by putting a long sail maker's needle through his biceps.  He managed to do this without experiencing pain and also succeeded in stemming any flow of blood.  Interestingly, he stated that he put the needle through "an arm", not his arm, in effect dissociating himself from the pain. He was asked by Dr. Green, to make his arm bleed. His wound opened up like a faucet. “He then let go and moved back into the silence of the higher self, and the bleeding stopped instantaneously. "

Man is coming out of his state of ignorance, the ignorance which made man perceive only from his physical environment and create concepts about this environment, ignoring his relationship with the cosmos, thereby shunning everything which would give him awareness, and thus causing the interfering capacity of the Universal Laws which are not psychological or physiological, but metapsychophysio-logical - not a defiance of our physical laws, but an expansion of these laws.