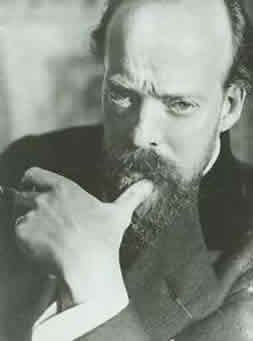 He was  born in Altona, Holstein in Germany, became naturalized and resident in Switzerland, and then lived in France from 1884 until his death in Avon, Seine-et-Marne in 1926.  After studying art in Geneva, he relocated to Paris as a young man, where he became acquainted with Symbolist artists.

He has been described as a “gifted sensitive neurotic”!  He received no academic training apart from that he received at the School of Industrial Arts in Geneva, where he learned to draw plants. 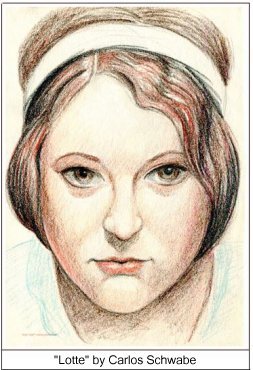 Schwabe was married, but led a relatively solitary life, with just a few very close friends.  He also had a lovely daughter Lotte whose portrait I have included.  He was not however, unsociable and “quickly mixed with Parisian circles becoming a protégé of  Péladan”

He also designed the first poster of the Salon de la Rose-Croix. Schwabe created a colour lithograph for the 1892 Salon de la Rose+Croix, the first of six exhibitions organized by Joséphin Péladan that "demonstrated the Rosicrucian tendencies of French Symbolism. Schwabe's poster depicted in shades of blue an initiation rite—three women ascending toward spiritual salvation and is an exemplar of Rosicrucian art"

Other people for whom he illustrated and designed include Stéphane Mallarmé,   José-Maria de Heredia, Pierre Louÿs, Catulle Mendes, Félicité de Lamennais, Edmond Haraucourt, Olive Schreiner, Charles Desfontaines (aka Baron Henri de Rothschild) plus more.  So one could think of him as principally an illustrator and designer, but that would be a mistake, his paintings are truly special.

He had a great love for his fellow man, so LOVE – was a big inspiration, joining the Union for moral action, and becoming close friends with the philosophers Gabriel and Mathias Séailles Morhardt  - the founders of the League of Human Rights.  He was not Jewish but spent a great deal of his time criticising anti-semitism and promoting the case for the oneness of man.

In essence, he was an extremely spiritual person – not a religious person – a spiritual person, and he as a consequence “frequented occult circles” which does not mean table turning and seances, but genuine interest in spiritual pursuits.  He was also a great music lover and became the best friend of the composer Guillaume Lekeu, of which more in a moment.

Two distinct styles are recognized in his art. Before the late 1890s, Schwabe's paintings were experimental, as he learnt about the nature and idealism of symbolism.  His wife was a very big influence at this stage, and he seems to have loved her intensely if his paintings are anything to go by.  One suspects that at this time making love ranked very high on his list of inspiration.  Images of women were important, we will see why in a moment.   His wife was his model for angels, and "Death" in The Death of the Grave-Digger (1895) resembles her.

But what appeared to drive him to heights of unparalleled inspiration and genius was grief.  In the summer of 1894, Guillaume Lekeu fell ill with typhoid fever from a contaminated sorbet.  He died in Angers, where his parents had lived since 1892, the day after his 24th birthday. He was buried in the small cemetery of Heusy, his home town, on 26 January 1894.  The death of his closest friend in 1894, when Schwabe was 28 years old, seemed to open the door so wide he appeared to be with the spirits most of the time after this.  So grief becomes a principle driving force.

There is also just the hint in his later paintings that someone very close to him, someone whom he loved to distraction died from drugs – probably opium.  His Fleurs de Mal pictures show extreme evil and a very obvious hatred for all that drugs represent.

Schwabe understood the nature of the spiritual world. Many of his pictures show the ecstatic state, which rather indicates he had achieved ecstasy or nirvana or possibly even annihilation.  This would make him a genuine mystic.  He knew that one reaches the Higher spirit through the feminine which is why women figure so prominently in his work.  Death is not literal death.  Through the feminine one achieves annihilation, the mystic marriage  – it is an ideal, not a negative state.  This sort of death is the ultimate goal not something one shies away from.

The following quote is good, but shows how little people understand of the spiritual motivation behind great art.  It is from the write up for an exhibition of his work

Combining the influences of Dürer, Hokusai, and the Pre-Raphaelites, Schwabe's meticulous, analytic draftsmanship lends a definite meaning to each detail. Thus the flowers and plants he drew from nature at different stages of their life - their budding, blossoming, and withering - appear as so many symbolic correlatives of human existence. Haunted by the notions of virginal purity and death, Schwabe painted watercolours and oils whose cold tones and themes are strange indeed. His masterpiece is The Death of the Grave-Digger (1895), depicting an angel of death with long green scythe-like wings come to fetch an old man who is digging a grave. Nor is this the only picture in which Schwabe gave death a woman's features (those of his own wife); there is The Day of the Dead/Grief and The Wave, with its unfurling wave of screaming women's faces. The preliminary charcoal sketches for this work bear witness to the exceptional graphic gifts of this secretive painter.

She is not an angel of death she is the Higher spirit,  green is the symbol of spring, dawn – new birth.  As it says, he was a symbolist.