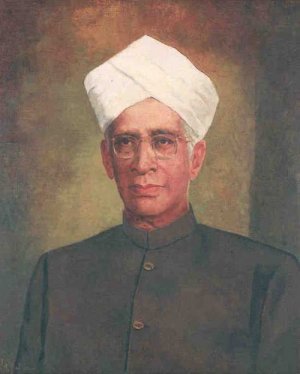 Sarvepalli Radhakrishnan(Telugu: సర్వేపల్లి రాధాకృష్ణ)( 5 September 1888 – 17 April 1975) was an Indian philosopher and statesman.  In 1931 he was nominated to the League of Nations Committee for International Cooperation, after which "in Western eyes he was the recognized Hindu authority on Indian ideas and a persuasive interpreter of the role of Eastern institutions in contemporary society." When India became independent in 1947, Radhakrishnan represented India at UNESCO (1946–52) and was later Ambassador of India to the Soviet Union, from 1949 to 1952. He  became the first Vice President of India (1952–1962) and the second President of India from 1962 to 1967.

Before he embarked on his political career, he was also one of India's most influential twentieth-century scholars of comparative religion and philosophy.  His academic appointments included the King George V Chair of Mental and Moral Science at the University of Calcutta (1921–1932) and Spalding Professor of Eastern Religion and Ethics at the University of Oxford (1936–1952).

Radhakrishnan was awarded the Bharat Ratna, the highest civilian award in India, in 1954. Among the other important honours he received were the British Knight Bachelor in 1931, although he ceased to use the title "Sir" after India attained independence, member of the "Order pour le Merite for Arts and Science" in 1954, and honorary membership of the British Royal Order of Merit in 1963. He was also awarded the Templeton Prize in 1975 for advocating non-aggression and conveying "love and wisdom for all people."

Sarvepalli Radhakrishnan was born in a Telugu Brahmin family. His primary education was at Primary Board High School at Tiruttani. In 1896 he moved to the Hermansburg Evangelical Lutheran Mission School in Tirupati, which left him with an understanding of western culture and a burning desire to try to get more understanding in the west for his own culture.  Radhakrishnan was awarded scholarships throughout his academic life. He graduated in 1906 with a Master's degree in Philosophy, being one of its most distinguished alumni.  Radhakrishnan wrote his thesis for the M.A. degree on "The Ethics of the Vedanta and its Metaphysical Presuppositions".

Radhakrishnan’s philosophy was grounded in Advaita Vedanta, reinterpreting this tradition for a contemporary audience.  He was also influential in shaping the West’s understanding of Hinduism, India, and the East, and earned a reputation as a bridge-builder between India and the West.

What makes Radhakrishnan very special is that "religious experience" – spiritual experience – had a central place in his philosophy as a source of wisdom.  He was influenced by the works of William James, Francis Herbert Bradley, Henri Bergson, Friedrich von Hügel and Vivekananda.   In his book An Idealist View of Life, he made a powerful case for the importance of what he called ‘intuitive thinking’ – inspiration and wisdom -  as opposed to purely intellectual forms of thought. 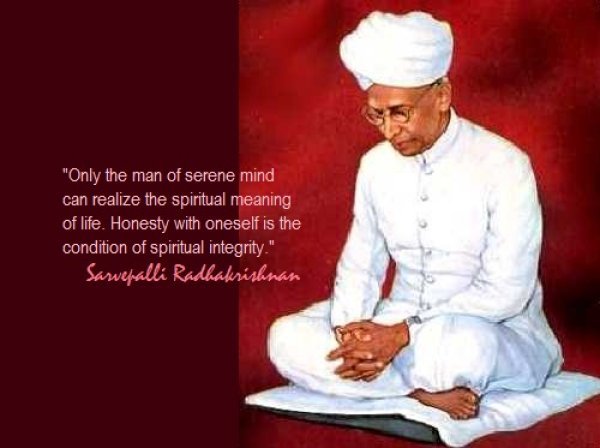 Radhakrishnan saw theology as intellectual interpretation of spiritual experience, and attempted to classify the various religions according to how well they managed to perform this classification.   This is actually an exercise fraught with difficulty as of course you need to have the original observations on which the presumptions have been based available in order to judge. But this is what philosophy should be – based on observations not hypotheses you then set out to prove, as he said

if philosophy of religion is to become scientific, it must become empirical and found itself on religious experience.

In the Vedas he saw an example of this in practise, with the added advantage that those who classified and codified had actually had spiritual experiences themselves

The truths of the ṛṣis are not evolved as the result of logical reasoning or systematic philosophy but are the products of spiritual experience, dṛṣti or vision. The ṛṣis are not so much the authors of the truths recorded in the Vedas, as the seers who were able to discern the eternal truths by raising their life-spirit to the plane of universal spirit. They are the pioneer researchers in the realm of the spirit who saw more in the world than their followers. Their utterances are not based on transitory vision but on a continuous experience of resident life and power. When the Vedas are regarded as the highest authority, all that is meant is that the most exacting of all authorities is the authority of facts.

What makes his analysis interesting is that he then says that if you take observations of the spiritual world and classify those experiences you have not created a religion but a roadmap for others to follow:

The Vedanta is not a religion, but religion itself in its most universal and deepest significance.

In effect religion tends to be political, whereas this approach to understanding the spiritual rises above all politics.  His approach had a huge effect on the thinking of others:

In the western world, Radhakrishnan's interpretations of the Hindu tradition, and his emphasis on "spiritual experience", made Hinduism more readily accessible for a western audience, and contributed to the influence Hinduism has on modern spirituality.

Radhakrishnan’s concern for experience and his extensive knowledge of the Western philosophical and literary traditions has earned him the reputation of being a bridge-builder between India and the West. He often appears to feel at home in the Indian as well as the Western philosophical contexts, and draws from both Western and Indian sources throughout his writing. Because of this, Radhakrishnan has been held up in academic circles as a representative of Hinduism to the West. His lengthy writing career and his many published works have been influential in shaping the West’s understanding of Hinduism, India, and the East.

Radhakrishnan was thus one of the few who could see the underlying "divine unity" of the spiritual world.  He saw this unity in the writing of the seers of the Upanishads up to modern Hindus like Tagore and Gandhi, but also saw "an essential commonality between philosophical and religious traditions from widely disparate cultures." 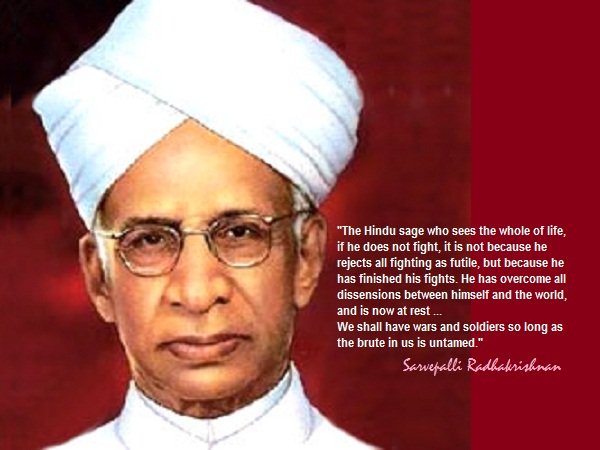 What is perhaps of interest is that he was clearly the receiver of wisdom and inspiration throughout his life, but there is very little indication as to how he achieved this other than love for his fellow man.  He was deeply involved in charity work throughout his life, believed in service to others, was not a great self promoter despite his numerous academic and political achievements and was a devoted family man.  Radhakrishnan was married to Sivakamu, a distant cousin, at the age of 16. As per tradition the marriage was arranged by the family. The couple had five daughters and a son. They were married for over 51 years.