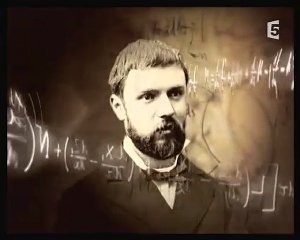 Despite being married [many geniuses are not], he had all the hallmarks of a genius. He was physically clumsy, his mind was all over the place, going as one commentator put it ‘like a bee going from one flower to another’.  He believed nothing in mathematics - whilst most mathematicians at the time worked from principles already established, Poincaré started from basic principles each time.  He also had a strong belief in the subconscious, which actually meant for him a higher inspirational power. 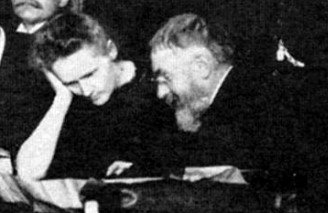 Marie Curie and Poincaré talk at the 1911 Solvay Conference

Poincaré had philosophical views in agreement with philosophers like Immanuel Kant, which again puts him firmly in the more spiritually minded group.  Intuition was, he said, the life of mathematics. Poincaré believed, for example, that Newton's first law was not empirical but a framework assumption for mechanics. Poincaré was quite scathing about people who 'believe' in science.  In his book Science and Hypothesis he said:

For a superficial observer, scientific truth is beyond the possibility of doubt; the logic of science is infallible, and if the scientists are sometimes mistaken, this is only from their mistaking its rule.

Poincaré made numerous contributions to different fields of pure and applied mathematics such as: celestial mechanics, fluid mechanics, optics, electricity, telegraphy, capillarity, elasticity, thermodynamics, potential theory, quantum theory, theory of relativity and physical cosmology.  He was also a populariser of mathematics and physics and wrote several books for the lay public.

He was responsible for formulating the Poincaré conjecture, which was one of the most famous unsolved problems in mathematics until it was solved in 2002–2003. In his research on the three-body problem, Poincaré became the first person to discover a chaotic deterministic system which laid the foundations of modern chaos theory. He is also considered to be one of the founders of the field of topology.  In the field of differential equations, Poincaré has given many results that are critical for the qualitative theory of differential equations, for example the Poincaré sphere and the Poincaré map.

Poincaré made clear the importance of paying attention to the invariance of laws of physics under different transformations, and was the first to present the Lorentz transformations in their modern symmetrical form.  Poincaré also published two now classical monographs, "New Methods of Celestial Mechanics" (1892–1899) and "Lectures on Celestial Mechanics" (1905–1910). His work in this area were the first major achievements in celestial mechanics since Isaac Newton.

Poincaré was born in Nancy, Meurthe-et-Moselle into an influential family. His father Leon Poincaré (1828–1892) was a professor of medicine at the University of Nancy. He was raised in the Roman Catholic faith, but later criticized religious dogmas particularly with respect to the mixing of theology and science. He did not reject, however, the existence of the spiritual or a higher inspirational force at work – which he called ‘illumination'.  It is notable that his much loved younger sister Aline married the spiritual philosopher Emile Boutroux. Furthermore, Poincaré as a philosopher was interested in the "deeper meaning" of the discoveries he was making in mathematics and where they were coming from. 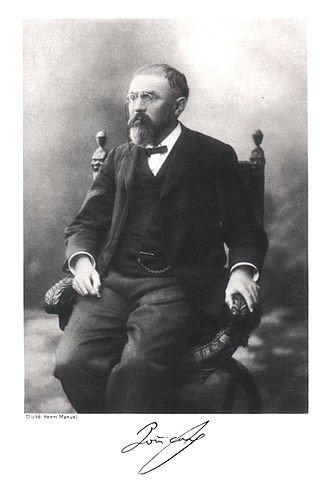 Poincaré was fascinated, for example, in the way his mind worked; he studied his habits and gave a talk about his observations in 1908 at the Institute of General Psychology in Paris. He linked his way of thinking to how he made several discoveries. Poincaré himself wrote that he believed that logic and intellect was not a way to invent, but a way to structure ideas after the event, and that logic/intellect actually inhibits inspiration.

This spiritual understanding governing his work, as well as the belief in the existence of 'spirit' - then called 'ether' found form in his work on relativity.  Poincaré discovered the remaining relativistic velocity transformations and recorded them in a letter to Dutch physicist Hendrik Lorentz (1853–1928) in 1905 - an important step in the formulation of the theory of special relativity.  But Poincare assumed a spiritual energy in what eventually became the famous equation E = mc2.

Poincaré assumed that there exists a non-electric energy throughout space, which can be transformed into electromagnetic energy and which also carries a mass proportional to the energy.

Poincaré's work in the development of special relativity is well recognised, though most historians stress that despite many similarities with Einstein's work, the two had very different research agendas.   It is important to note that Poincaré developed a similar theory of Time to Einstein, but his was based on ‘ether’, the old word for spirit and occasionally aether.   Intriguingly, he continued to use the ether-concept in his papers and argued that clocks in the aether ‘out of time’ show the "true" time, whereas if you are ‘in time’ all you see is everything relative to your perceptions.

So from where did he derive his inspiration? 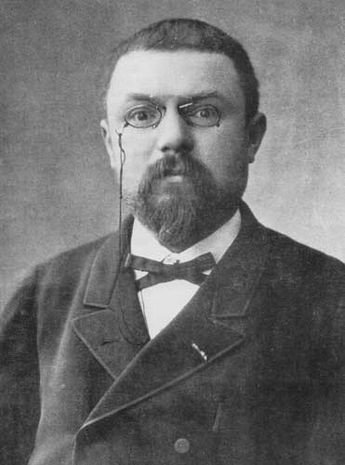 He was not a healthy child.  During his childhood he was seriously ill for a time with diphtheria and as a consequence was schooled at home by his mother.  His school reports all show he was hopeless at physical education.  He was also ambidextrous and nearsighted. Very near sighted.  His eyesight was so poor that he could not see anything the lecturer wrote on the blackboard, when he eventually did attend school.

But he turned out to be a talented little boy.  He spent eleven years at the Lycée and during this time he proved to be one of the top students in every topic he studied. He also won first prizes in the concours général, a competition between the top pupils from all the Lycées across France.

Poincaré studied mathematics as a student of Charles Hermite. From November 1875 to June 1878 he studied at the École des Mines, while continuing the study of mathematics in addition to the mining engineering syllabus, and received the degree of ordinary mining engineer in March 1879.  As a graduate of the École des Mines, he joined the Corps des Mines as an inspector for the Vesoul region in northeast France. He was on the scene of a mining disaster at Magny in August 1879 in which 18 miners died. He carried out the official investigation into the accident in “a characteristically thorough and humane way”. 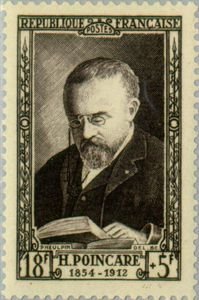 After receiving his degree, Poincaré began teaching as junior lecturer in mathematics at the University of Caen in Normandy (in December 1879). At the same time he started publishing what was to become a series of mathematical papers.  In 1881 Poincaré was invited to take a teaching position at the Faculty of Sciences of the University of Paris; he accepted the invitation. During the years of 1883 to 1897, he taught mathematical analysis in École Polytechnique.  Beginning in 1881 and for the rest of his career, he taught at the University of Paris (the Sorbonne). Eventually, he held the chairs of Physical and Experimental Mechanics, Mathematical Physics and Theory of Probability, and Celestial Mechanics and Astronomy.

In 1912, Poincaré underwent surgery for a prostate problem and subsequently died from an embolism on 17 July 1912, in Paris. He was 58 years of age.