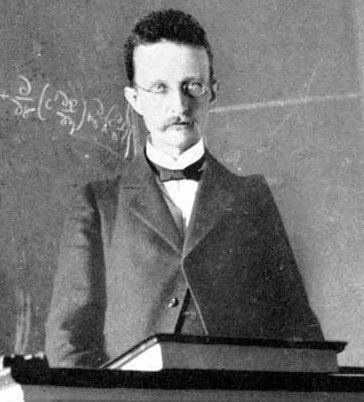 Max Karl Ernst Ludwig Planck, FRS (April 23, 1858 – October 4, 1947) was a German theoretical physicist who originated quantum theory, for which he was awarded the Nobel Prize in Physics in 1918.

Planck began his studies in the field of heat theory and it was through heat theory that the quantum theory evolved.  In April 1885 the University of Kiel appointed Planck as associate professor of theoretical physics. Further work on entropy and its treatment followed. In 1892 Planck became a full professor. In 1894 Planck turned his attention to the problem of black-body radiation. He had been commissioned by electric companies to create maximum light from lightbulbs with minimum energy.

Planck’s black-body radiation law, which described the experimentally observed black-body spectrum was published in 1901. What was key about this law was that it was based on the theory known now as the Planck postulate, that electromagnetic energy could be emitted only in quantized form, in other words, the energy could only be a multiple of an elementary unit E=hv , where h is Planck's constant, and v is the frequency.

In essence a unit of energy is something which has vibrational frequency and is represented by the combination of hv and not simply by h.  Planck eventually went on to state [like Einstein] that everything was made of energy and that in essence, energy consists of units of energy which are vibrating at various rates [spinning in reality].   He did not make the link that energy with no spin is essentially chaos and energy with spin is spirit, but that is mostly because in his earlier life he had no exposure to philosophical or mystical thought.  Later in his life [as you will see from the observations], his exposure to more 'mystical' scientists made him realise that all is indeed energy.

Physicists now call these quanta photons, and have completely reduced the whole concept to particles yet again – but I suppose that is the definition of a physicist – a materialist incapable of conceiving that everything could be software.

What is extraordinary is that at first Planck considered that quantisation was only "a purely formal assumption ... actually I did not think much about it..."; nowadays this assumption is regarded as the greatest intellectual accomplishment of Planck's career.  Subsequently, Planck tried to grasp the meaning of energy quanta, but to no avail. "My unavailing attempts to somehow reintegrate the action quantum into classical theory extended over several years and caused me much trouble."

What he would not have realised, I suspect, is that the idea has been around for millennia, that it is a fundamental understanding of all Eastern mystic thought.  But Planck must have tuned into this thought unawares and thankfully brought it into the realm of science, taking science from the dark ages into at least a glimmer of light. A sort of TocH lamp world.   Scientists are still way way behind, but they are gradually catching up in understanding.

Where did Max Planck derive his inspiration?

Planck was born in Kiel, Holstein, and was the 6th child in the family. He was gifted when it came to music. He took singing lessons and played piano, organ and cello, and composed songs and operas. However, instead of music he chose to study physics.  Part of the choice may have been due to his schooling.  In 1867 the family moved to Munich, and Planck enrolled in the Maximilians gymnasium school, where he was taught astronomy, mechanics and mathematics by a favourite teacher.  Thus we essentially have someone who was already a ‘right brainer’.  There is also some evidence [notably the way he used to part his hair before he went bald] that he was left handed. 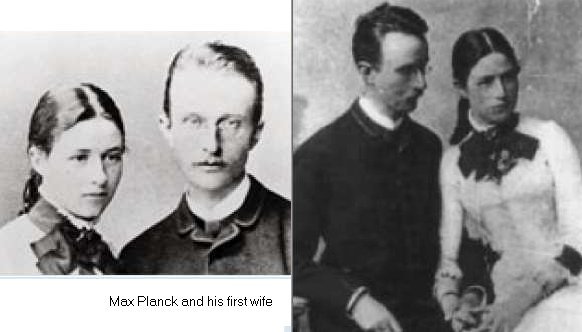 Planck never really produced any ideas as inspired as those he produced from this time and one of the reasons is that his later life was marked by desperate tragedy.

In July 1909, Marie Planck died, possibly from tuberculosis. During the First World War Planck's second son Erwin was taken prisoner by the French in 1914, while his oldest son Karl was killed in action at Verdun. Grete died in 1917 while giving birth to her first child. Her sister died the same way two years later, after having married Grete's widower.  In January 1945, Erwin, to whom he had been particularly close, was sentenced to death by the Nazi Volksgerichtshof because of his participation in the failed attempt to assassinate Hitler in July 1944. Erwin was executed on 23 January 1945.  During World War II, Planck's house in Berlin was completely destroyed by bombs in 1944 destroying with it all his research.

Planck did marry again, in March 1911, to Marga von Hoesslin (1882–1948); in December his fifth child Hermann was born.  But as we can see his life was a series of terrible emotional blows. 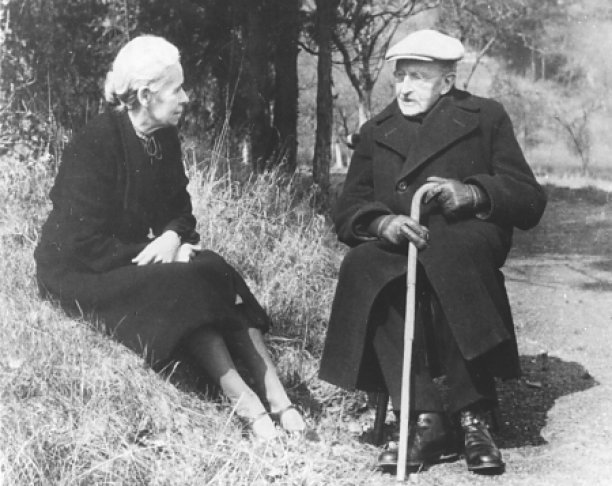 His subsequent trials and tribulations did nothing to help his wisdom.  Planck signed the infamous "Manifesto of the 93 intellectuals", a pamphlet of polemic [First World] war propaganda.  And in the turbulent post-war years, Planck became the highest authority of German physics, but issued few memorable new theories.  As a member of the Deutsche Volks-Partei (German People's Party), he opposed the introduction of universal suffrage.

When the Nazis seized power in 1933, Planck was 74. He witnessed many Jewish friends and colleagues expelled from their positions and humiliated, and hundreds of scientists emigrated from Germany.  Despite this he insisted that scientists should "persevere and continue working".  He even asked scientists who were considering emigration to remain in Germany. Otto Hahn asked Planck to encourage well-known German professors to issue a public proclamation against the treatment of Jewish professors, but Planck replied, "If you are able to gather today 30 such gentlemen, then tomorrow 150 others will come and speak against it, because they are eager to take over the positions of the others."

But Planck himself started to become the subject of criticism. The "Hauptamt Wissenschaft" (Nazi government office for science) started an investigation of Planck's ancestry, finding that he was "1/16 Jewish".  In 1938, Planck celebrated his 80th birthday, during the War he stayed in Germany, although his life was made very unhappy.  The death of Planck’s son Erwin at the hands of the Gestapo in 1945; destroyed much of Planck's will to live.  By the end of the war Planck, his second wife, and his son by her moved to Göttingen where he died on October 4, 1947. 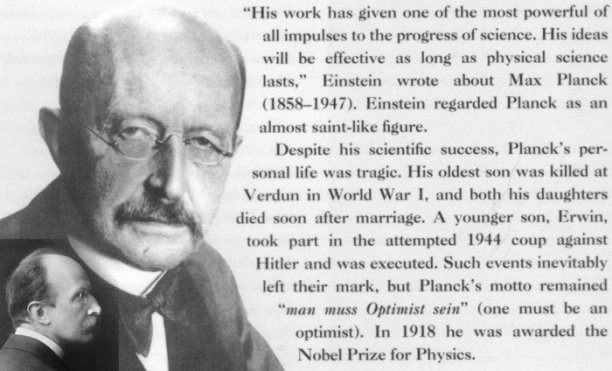 "A new scientific truth does not triumph by convincing its opponents and making them see the light, but rather because its opponents eventually die, and a new generation grows up that is familiar with it."