He flew and landed a powered heavier-than-air machine on 31 March 1903, some nine months before the Wright brothers flew their aircraft.  He designed and built a two-cylinder "oil engine" which he mounted on a tricycle undercarriage surmounted by a linen-covered bamboo wing structure and rudimentary controls. Although it lacked an aerofoil section wing, his flying machine resembled modern aircraft design much more than did the Wright brothers' machine: monoplane rather than biplane; tractor rather than pusher propeller; stabiliser and elevators at the back rather than the front; and ailerons rather than wing-warping for controlling banking. It bore a remarkable resemblance to modern microlight aircraft.

Pearse himself was not a publicity-seeker and was not commercially minded.  He was essentially a lone eccentric and was to all intents and purposes a genius who did not know his genius.  His inventions were not confined to aircraft.  In 1902,  Pearse built a bicycle with vertical crank gears, for example, and self-inflating tyres 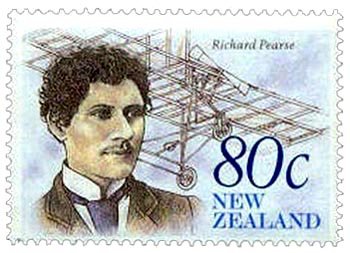 Pearse moved to Milton in Otago in about 1911 and discontinued his flying experiments due to the hillier country there. Much of his experimental equipment got dumped in a farm rubbish-pit. However, he continued experimenting.  Throughout the 1930s and 1940s, Pearse continued to work on constructing a tilt-rotor flying-machine for personal use – sometimes described as a cross between a windmill and a rubbish-cart. His design resembled an autogyro or helicopter, but involved a tilting propeller/rotor and monoplane wings, which, along with the tail, could fold to allow storage in a conventional garage.

But poor Richard, like most solitary geniuses, eventually became reclusive and paranoid. Committed to Sunnyside Mental Hospital in Christchurch in 1951, Pearse died there two years later.

Researchers believe that many of his papers were destroyed at that time, but fortunately for posterity, the trust officer given the task of disposing of his personal effects recognised the significance of his aeronautical achievements and brought them to wider attention. As a result, aviation pioneer George Bolt saw Pearse's last flying machine. In 1958, Bolt excavated the South Canterbury dump site and discovered some components, including a propeller.

Popular history has it that the Wright Brothers at Kitty Hawk in the US were the first to fly, but this is not true!  The first actual flight was by a rather clever New Zealander chap by the name of Richard Pearse. Pearse is not generally known outside New Zealand for this wonderful feat, as there has been very little publicity about it, the first real mention of his achievement being in the newspaper in 1909.  Richard was an enthusiast, and perhaps a turn of the century 'mad scientist' type inventor. Certainly most of his other creations - mostly to do with farm machinery - were far from the mainstream and thus didn't get much credit.  But he did get a few things right on his flying machine that were amazingly advanced for the time. Here's a photo of a replica of the flying machine, where Man's first powered flight took place in a little-known place on the south island of New Zealand called Waitohi, just near Timaru. 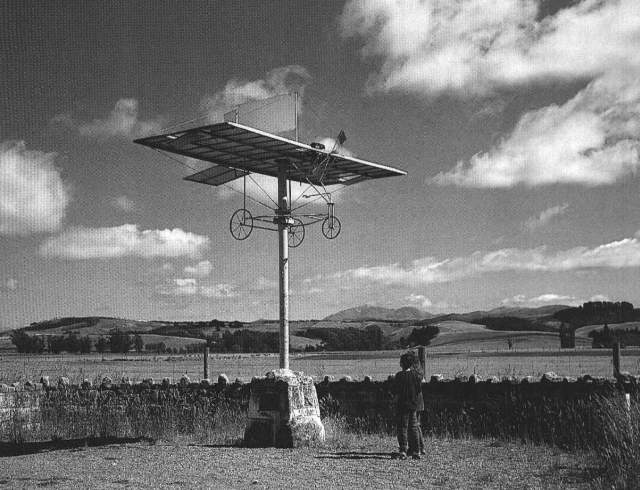 The witnesses' account of the flight vary, from "50 to 400 yards in length", but it seems most likely that it was around 350 yards long, and it ended prematurely when the flying machine landed in a large hedge - 4 metres off the ground!

The aircraft was the first to use proper ailerons, instead of the wing warping system that the Wright's used. The flying machine also had a modern tricycle type landing gear, thus negating the need for ramps, slides, or skids. Any suitable road would do. The flying machine was aerodynamically crude, for sure, but did the job on the day, and in fact for months afterwards. By the end of July 1903, Pearse had achieved flights of around 1 kilometre in length, and perhaps even more amazingly, some of them included turns! An absolutely fantastic achievement for the time.
Pearse also built the engine, which was estimated at about 15 - 22hp, but hampered by a much cruder propellor than the Wright's machine.
He didn't realise the historic importance of the event, and so he didn't bother to have any photographs taken of his machine flying, though there is extensive evidence from witnesses describing  his flights.

The early series of flights where on these dates -
- 31-3-1903 - First powered flight. Estimated distance around 350 yards. Similar to the first Wright Brothers flight, ie, in a straight line, and barely controlled. (Some witnesses claim the flight was on that date, but 1902)

- March 1903. After spending a year working on the engine, and tending to his farm, Pearse made another flight, this time with a distance of only about 150 yards. (This is why the 1902 flight is quite possible)

- 11-5-1903. This, in my opinion, was Man's first real flight. Pearse took off along the side of a river, the Opihi River, turned left to fly over the 30' tall river bank, then turned right to fly parallel to the middle of the river, above the wing's ground effect. After flying nearly 1,000 yards, his engine began to overheat and lost power, thus forcing a landing way down the dry-ish riverbed. One of the locals, Arthur Tozer, was crossing the river at the time in a horse-drawn carriage, and was rather surprised to have Pearse fly right over his head!

- 10-7-1903 Again, distance unknown, but the aircraft was (yet again!) stuck in a hedge many feet above the ground until the snow melted some time later.

While these dates are as certain as they can be, it is clear that Pearse flew many other times, perhaps as early as 1901. (Though this was behind being towed by two horses.) It is also believed that he also continued to make many other flights in the privacy of his own property, which as you may have guessed had some very large gorse hedges around it. His desire for privacy was no doubt a major restriction in his ability to find a clear area to fly for any great distance.

The engine that he made was extremely clever, I think. It was a twin cylinder and piston device, but the pistons worked in both directions so that it was effectively a four cylinder & piston engine.

Fairly soon afterwards he lost interest in the fledgling aviation scene, as all the credit was going to overseas flights, unfortunately. It was too late to claim the credit he was due, so he went back to farming.

He made a brief return in the mid 1930's, when designed and partly built an aircraft that would've revolutionised air travel for the masses - It had fold up wings and a tail so it could be put into a conventional garage. The engine could be run as either a 2 stroke or a 4 stroke, and also either supercharged or naturally aspirated. Also, the entire engine/prop assembly pivoted so that the aircraft could do a vertical takeoff and landing. It was never finished, for various reasons.

So when you look up at an aircraft flying above you, please remember that the true story is that a reclusive farmer from the cold south island of New Zealand was the first to create history - He deserves the credit he's due.

Much of the information and pictures on this page is reproduced with the very kind permission of the author of the excellent book, "Richard Pearse, Early new Zealand Pioneer Aviator", by Geoffrey Rodliffe. If you wish to know more of Pearse, please don't hesitate to purchase any of Geoffrey's books, or perhaps contact him via email at -Geoff.Rodliffe@clear.net.nz