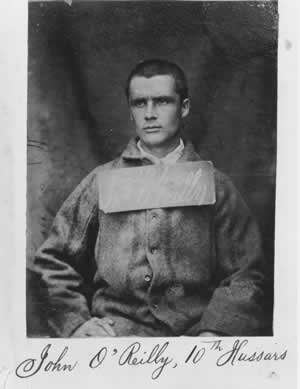 John Boyle O'Reilly (1844–1890)  was born at Dowth Castle near Drogheda in Ireland at the onset of the Great Irish Famine. Ireland was at that time a part of the United Kingdom, many Irish people bitterly resented English rule, and there was a strong nationalist movement.

The son of a schoolmaster, O'Reilly received a good early education and learnt his writing skills from a succession of jobs with local newspapers. In 1861, whilst in the UK working, O'Reilly enrolled in the 11th Lancashire Rifle Volunteers, from whom he received some military training. On returning to Ireland in 1863, he enlisted with the 10th Hussars in Dublin.  All good training if you are a rebel.  O’Reilly was an angry young man and you can see it in all his early poems – fury, overwhelming rage and anger flew from every page.

Some time in 1865, O'Reilly joined the Irish Republican Brotherhood, then commonly known as the Fenians, a secret society dedicated to the planning and execution of an armed uprising against British rule. He then turned his energies to the recruitment of more Fenians within his regiment, bringing it up to 80 new members. By late 1865, the Fenians had become such a large group they could no longer hide their existence from the British authorities. The government made a number of raids, seized records, and gathered evidence from informers. Many Fenians were arrested, including O'Reilly.

For his part in the Fenian conspiracy, O'Reilly was sentenced to twenty years penal servitude. He served nearly two years in English prisons, before boarding the convict ship Hougoumont for transportation to the British colony of Western Australia.

So here we have the start of his transformation from rebel to writer and poet.  Humiliation and  losing your independence.

After arriving in Fremantle, on 9 January 1868, O'Reilly was initially admitted to the Convict Establishment (now Fremantle Prison), but after a month was transferred to Bunbury to join a party of convicts who were building the Bunbury–Vasse road.

On arriving in Bunbury, O'Reilly quickly developed a good relationship with his warder Henry Woodman, and was appointed probationary convict constable: an assistant to the warder.

The warder used O'Reilly to maintain contact with his family, and O'Reilly became a regular visitor to the Woodman family home, and at some point commenced a 'romantic liaison' with Woodman's daughter Jessie. Evidently this ended badly: poetry written by O'Reilly around this time expresses torment and grief at what happened. On 27 December 1869, O'Reilly attempted suicide by cutting the veins of his left arm. After falling into a faint from loss of blood, he was discovered by another convict, and his life was saved.

So now we have unrequited love.

While in Bunbury, O'Reilly formed a strong friendship with the local Catholic priest, Father Patrick McCabe. Late in 1869, McCabe offered to arrange for O'Reilly to escape the colony. By February, McCabe's plan was ready for execution.

On 18 February 1869, O'Reilly absconded from his work party, and met up with a party of Irish settlers from the local town of Dardanup. Together they rode to the Collie River where a rowboat was waiting for them. After a series of adventures via Mauritius, and  transfer to another ship  the American cargo vessel Sapphire on the high seas, O'Reilly and the Sapphire arrived at Liverpool on 13 October, and O'Reilly transferred to another American ship, the Bombay. The Bombay docked in Philadelphia on 23 November 1869.

O'Reilly settled in Boston, and soon found work on the newspaper the Pilot . His first major assignment was coverage of the Fenian invasion of Canada. The invasion was a complete disaster, and the experience of covering it prompted O'Reilly to reverse his opinion on military Fenianism. Thereafter he rejected militancy, poet became pacifist.

The Pilot's readership grew until it was one of the most read newspapers in the country. O'Reilly soon became its editor, and eventually became part-owner.

In his later years, O'Reilly became prone to illness, and suffered from bouts of insomnia. Late in the evening of 9 August 1890, while suffering from insomnia, he took some of his wife's sleeping medicine, which contained chloral hydrate. In the early hours of the morning, he was found dead. There remains some doubt as to the cause of death. Public announcements attributed O'Reilly's death to heart failure, but the official death register claims "accidental poisoning".

O'Reilly's poems started to be published once he reached the USA, but his poems can be traced back to much earlier years.  I personally think his earlier poetry, tinged as it is with idealism and suffering, resonates more strongly with who he really was, than his later poetry and writing.  He was a good writer all his life but the earlier works are inspired, his later works are just good writing.