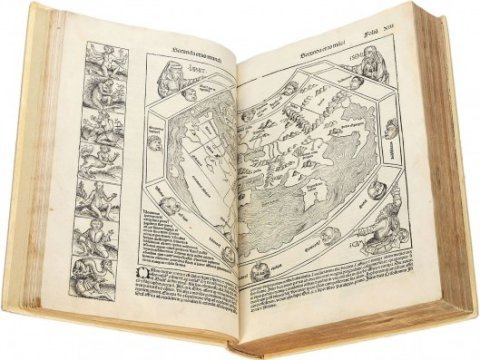 The Nuremberg Chronicle is according to Wikipedia “an illustrated biblical paraphrase”.  But I’m not sure this is quite accurate.  A biblical paraphrase is “a literary work that has as its goal, not the translation of the Bible, but rather, the rendering of the Bible into a work that retells all or part of the Bible in a manner that accords with a particular set of theological or political doctrines."  The Nuremberg Chronicle certainly includes a great deal of Biblical reference, but it is more like a compendium of symbolic and spiritual wisdom as it was known at the time.

Latin scholars refer to the book as Liber Chronicarum (Book of Chronicles) as this phrase appears in the index introduction of the Latin edition. English speakers have long referred to it as the Nuremberg Chronicle after the city in which it was published. German speakers refer to it as Die Schedelsche Weltchronik (Schedel's World History) in honour of its author.  It was written in Latin by Hartmann Schedel and appeared in 1493.

The contents are divided into seven ages -  or aeons:

It is one of the best-documented early printed books and one of the first to successfully integrate illustrations and text.  And it is the illustrations I have concentrated on for the site, as they are a compendium of symbolism, extremely comprehensive and very simply done and easy to understand.

The large workshop of Michael Wolgemut, then Nuremberg's leading artist in various media, provided the then unprecedented 1,809 woodcut illustrations.  Albrecht Dürer was an apprentice with Wolgemut, so may well have participated in designing some of the illustrations.  The illustrations in many copies were hand-coloured after printing.  The small selection I have provided are only a taster. 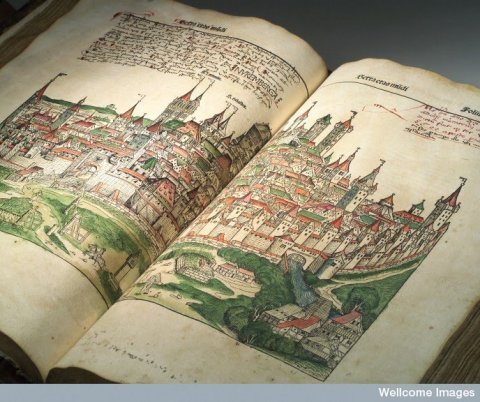 As with other books of the period, many of the woodcuts, showing towns, battles or kings were used more than once in the book, with the text labels merely changed; one count of the number of original woodcuts is 645. The book is large, with a double-page woodcut measuring about 342 x 500mm.

It may appear odd that towns, kings and cities were included, but many physical towns were designed according to the ‘rules’ of sacred geography, as such cities like Venice and Amsterdam were themselves symbols.  Furthermore, the geneology of Kings and Queens was at this time considered important, because there was still a belief that spiritual ability was inherited and that actual Kings and Queens were the ones inheriting it!

Two Nuremberg merchants, Sebald Schreyer (1446–1503) and his son-in-law, Sebastian Kammermeister (1446–1520), commissioned the Latin version of the Chronicle. They also commissioned George Alt (1450–1510), a scribe at the Nuremberg treasury, to translate the work into German. Both Latin and German editions were printed by Anton Koberger, in Nuremberg.

An estimated 1400 to 1500 Latin and 700 to 1000 German copies were published. A document from 1509 records that 539 Latin versions and 60 German versions had not been sold. Approximately 400 Latin and 300 German copies survived into the twenty-first century. The larger illustrations were also sold separately as prints, often hand-coloured in watercolour. The colouring on some examples has been added much later, and some copies have been broken up for sale as decorative prints, which means where colour symbolism was being used, it may not be correct in some prints.

The author of the text, Hartmann Schedel, was a medical doctor, humanist and book collector. He earned a doctorate in medicine in Padua in 1466, then settled in Nuremberg to practice medicine and collect books. According to an inventory done in 1498, Schedel's personal library contained 370 manuscripts and 670 printed books. The author used passages from the classical and medieval works in this collection to compose the text of the Chronicle. He borrowed most frequently from another humanist chronicle, Supplementum Chronicarum, by Jacob Philip Foresti of Bergamo. It has been estimated that about 90% of the text is pieced together from works on the humanities, science, philosophy, and 'theology' of the day, while about 10% of the Chronicle is Schedel’s original composition.

Schedel was also helped.  Hieronymus Münzer, assisted Schedel as did [very significantly] Albrecht Dürer, not just i the illustrations.  The publisher and printer, Anton Koberger, was the godfather of Albrecht Dürer.  As such the text and the pictures are not just a synthesis of information, they are informed by people of a spiritual leaning.