If you read the learned literature on this, academics will tell you it is a picture of hirsutism.

I cannot decide which of several options this symbol represents.

The lady could be a symbol of the satyr or the tree.  Female satyrs, because of their symbolic meaning are virtually unknown in earlier times, however, they may have crept in by the time this was produced.  She may be called Daphne, which would be a clue [sorry -  a joke].

But it may be she is indeed just hairy, in which case we look to the symbolism of hair.

As Cirlot says "Abundant body hair signifies the prevalence of the baser forces".  It can, however, also indicate fertility in a woman.  Cirlot again "Hairs correspond to the element of Fire signifying the burgeoning of primitive forces" - lusty demons!

I think it is helpful to compare hairiness on the body with the symbol of nakedness, so I have provided  a link.

The final option is provided by a comparison with a similar picture in The Marriage of Philology and Mercury - see Maid 6.  Here there is no doubt that the picture shows spiritual energy pouring forth in great abundance.  As sexual energy was absolutely key to many forms of spiritual experience this may well be what is being shown - the build up of sexual energy ready for the final push [so to speak] via sex magick or sexual stimulation. 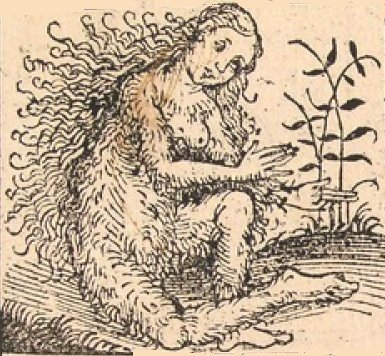