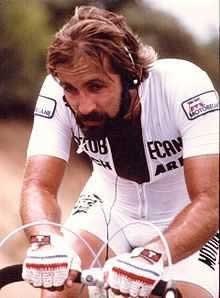 Michael Shermer (born 1954) is an American science writer, historian of science, founder of The Skeptics Society, and Editor in Chief of its magazine Skeptic which is largely devoted to investigating pseudoscientific and supernatural claims. The Skeptics Society currently has over 55,000 members. Shermer also engages in debates on topics pertaining to pseudoscience and religion in which he promulgates the need for scientific skepticism.

But in this context, what is also key is that Shermer is a very competitive bicycle enthusiast, who started  bicycling in 1979, and spent a decade in the sport.

During the decade in which he raced long distances, he helped to found the 3,000-mile nonstop transcontinental bicycle Race Across America (along with Lon Haldeman and John Marino), in which he competed five times (1982, 1983, 1984, 1985, 1989), was assistant race director six years, and executive race director seven years.

An acute medical condition is named for him: "Shermer Neck" is pain in and extreme weakness of the neck muscles found among long-distance bicyclists. Shermer suffered the condition during the 1983 Race Across America.

Shermer's embrace of scientific skepticism crystallized during his time as a cyclist,

"I became a skeptic on Saturday, August 6, 1983, on the long climbing road to Loveland Pass, Colorado" after months of training under the guidance of a "nutritionist" with an unaccredited Ph.D. After years of practicing acupuncture, chiropractic, massage therapy, negative ions, rolfing, pyramid power, fundamentalist Christianity, and "a host of weird things" (with the exception of drugs) to improve his life and training, Shermer stopped rationalizing the “failure of these practices”.

It is unclear what he wanted them to do.

He has however, according to him, been abducted by alien spacecraft.  See the observation.