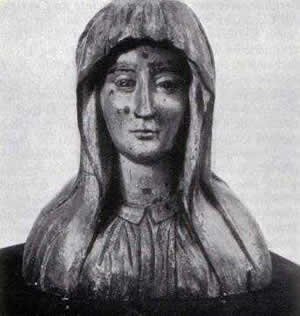 Mary of Oignes was born in 1176 in the diocese of Liege.  She was married at 14,  but persuaded her husband to take a vow of chastity and thereafter they devoted their life to ‘good works’ caring for lepers, the sick, old and ill.

And Mary was a fasting anorexic who died of starvation!

The following extracts were taken from ‘Medieval Writings on Female Spirituality’ – a very well researched compendium.

The Life of Saint Mary of Oignes
Compassionate people questioned her wishing to know whether after fasting for so long, staying awake so frequently and weeping so often, she felt any aches and pains of the kind that are common when one is light headed.  And she said ‘these tears refresh me, they are what sustain me night and day, they do not hurt my head but feed my mind…
She had been very sick and because she really needed it, she was forced to eat meat and drink wine for a while, and afterwards her abhorrence of this pleasure was so great that her spirit could not rest until she had punished herself and made amends, torturing her flesh amazingly .. in a spiritual fervour .. she cut off great lumps of her flesh and felt such shame that she buried them in the earth…….
She drank no wine; ate no meat and very rarely any fish, just small ones occasionally; her sustenance was the fruit of trees, green vegetables and soup.  And for  long time she only ate bread so black and sour that dogs would hardly have managed to eat it, bread so bitter and hard that it took the skin off the inside of her mouth and left bleeding wounds…..
Indeed eating often caused her discomfort because she fasted so much and for such long periods her stomach ached and churned as though it were so cold and bloated that it found food repulsive ……………….
Once she rested peacefully in silence …. eating no food for 35 days… she certainly felt at that time as though her spirit had left her body….
On another occasion she lashed herself with a sharp stick three hundred times each time she knelt, sacrificing and offering herself in a prolonged martyrdom….. and with the final three strokes, to intensify the effect of others, she made her body bleed profusely…….
She denied herself sleep as often as possible.
When her holy body was washed after her death, she was found to be so small and thin from infirmity and fasting that her spine was stuck to her stomach and the bones of her back showed through the scant skin of her belly as through a linen cloth…

So as we can see, not only did Mary fast, she also self-flagellated, and deprived herself of sleep.  And as a consequence of this appalling self-abuse, she had hallucinations.