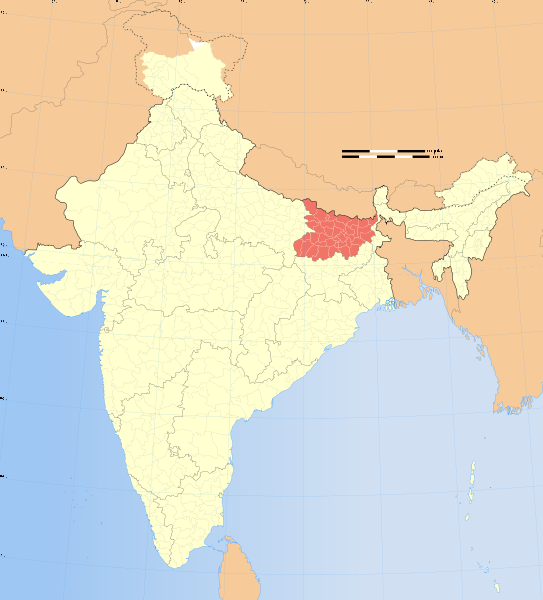 Mahavira (599 BCE–527 BCE), also known as Vardhamana, was the twenty-fourth and last tirthankara of Jainism.

He is believed by Jains to be the most recent of these 24 Jinas.  Jinas are liberated beings who help others achieve liberation through acting as a teacher and role model.

Mahavira’s historical existence is not in doubt, but what is in doubt are his times of birth and death.  Recent scholarship has found that Buddha, of whom Mahavira was a contemporary, may have lived at a somewhat later date than originally thought, perhaps in the fourth century BC. It is therefore possible that Mahavira's dates are later than generally thought.

Mahavira was born into a royal family in what is now Bihar, India.  His parents were King Siddartha of Kundalapura and Queen Trishala, sister of King Chetaka of Vaishali.

Page from a Kalpasutra manuscript showing the birth of Mahavira, - 16th century.

Both his parents were strict followers of Jainism. At the time of Mahavira’s birth, new thinkers were questioning the stratified caste system with brahmins (priests) at the top. The Jains had also rejected animal sacrifice. For Jains in particular, a central tenet of their faith was a renunciation of violence in all its forms and a concern for all forms of life.

The name "Mahavira" is a Sanskrit word meaning Great Warrior. One of the reasons for this name is – and I quote – that ”during his boyhood, Mahavira brought a terrifying serpent under control”.  I have absolutely no proof for this, but I think this is symbolic.  The serpent is ‘serpent energy’ which means he was able to control energy flows from an early age.  The implication is that he may have had a kundalini experience and learned how to control kundalini energy.

Queen Trisala and the Newborn Mahavira

At the age of 30, Mahavira abandoned all the comforts of royal life and left his home and family to live an ascetic life.

He suffered great hardships, even going without clothes [or again this may be symbolic – nakedness]. There is a graphic description of the hardships and humiliation he faced in the Acaranga Sūtra.  Here is another account:

Kalpa Sūtra
The Venerable Ascetic Mahavira for a year and a month wore clothes; after that time he walked about naked, and accepted the alms in the hollow of his hand. For more than twelve years the Venerable Ascetic Mahivira neglected his body and abandoned the care of it; he with equanimity bore, underwent, and suffered all pleasant or unpleasant occurrences arising from divine powers, men, or animals.

In the eastern part of Bengal he suffered considerable distress, as boys pelted him with stones and people humiliated him.

Remembering that these accounts were written after his death and are around 2,500 years old, one can still get a feel for the life he led.  For over twelve and a half years, he practiced intense meditation, and used techniques designed to foster humility and charity.  In effect his aim was to squash the ego completely. 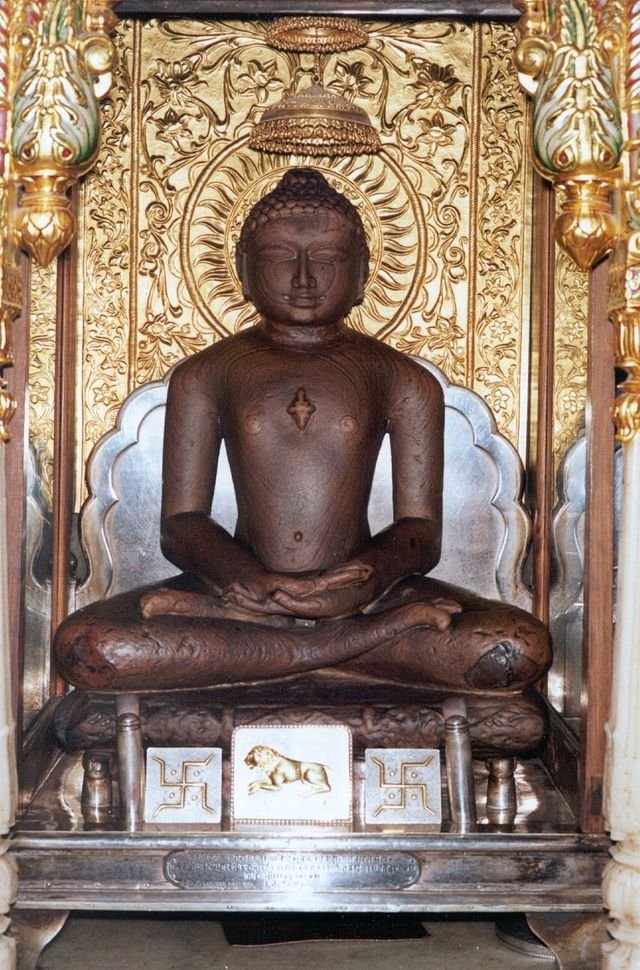 After twelve and a half years of this rigorous life of self deprivation, Mahavira achieved Kevala Jnana or enlightenment.

For the next 30 years Mahavira travelled all over Bharata (which was larger than today's India) to teach what he had learnt.

V&A Museum
Mahavira is often depicted in the centre of a samavasarana, where gods, men and animals come together in peace to hear him preach. Jain temples are conceived as replicas on earth of these celestial assembly halls.

His philosophy has eight cardinal (law of trust), three metaphysical and five ethical principles.  These are:

Mahavira taught that the pursuit of pleasure is an endless game, so we should train our minds to curb individual cravings and passions. That way one achieves contentment and equanimity of mind, and spiritual balance.
One should voluntarily limit acquisition of property in order to promote social justice and fair distribution of basic resources. The strong and the rich should not try to suppress the weak and the poor by acquiring limitless property and resources, which result in unfair distribution of wealth in society and hence poverty. This was to be true at every level, from individuals to businesses to countries.
Any attempt to try to enforce these five qualities by an external and legal authority was likely to lead to hypocrisy or secret criminal tendencies. So the individual, society or culture should exercise self-restraint, to achieve social peace, security and an enlightened world.

The texts containing the teachings of Mahavira are called the Agamas.  The agamas were initially memorised, only later were they written down.  As centuries passed some of the texts were forgotten, and others were misremembered. Then came a particular disruption around 350 BCE when a famine killed off many Jain monks, and with them the memory of many Jain texts.
The Digambara sect believes that during this famine all the Agamas were lost; the Svetamabara sect believes that the majority of these texts survived.  This is one of the most important differences between the two groups in Jainism.
Although Mahavira was not the founder Jainism, his words are of especial importance because they: represent a series of beginningless, endless and fixed truths.

Books on the life of Mahavira

There are various Jain texts describing the life of Mahavira. The most notable of them is the Kalpa Sūtra of Bhadrabahu. The first Sanskrit biography of Mahavira was Vardhamacharitra by Asaga in 853 CE.

Volume 22 of the Sacred Books of the East, Part One of the Hermann Jacobi translation of the Jaina Sutras, includes the Akaranga and Kalpa Sutras.

A number of the pictures on this page are from the Victoria and Albert Museum in London, which has the manuscripts themselves.