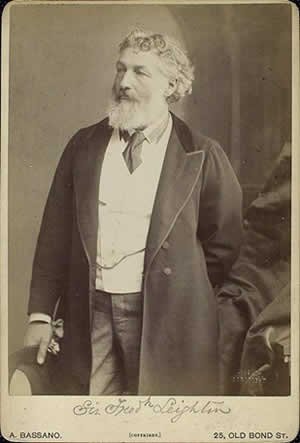 Leighton was educated at University College School, London. He then received his artistic training on the European continent, first from Eduard Von Steinle and then from Giovanni Costa.  When in Florence, aged 24,  he studied at the Accademia di Belle Arti.  He lived in Paris from 1855 to 1859, where he met Ingres, Delacroix, Corot and Millet.  In 1860, he moved to London, where he associated with the Pre-Raphaelites.  So we can see where the influences that affected his painting style came from.

He was no rebel, in fact he was pure establishment.  In 1864 he became an associate of the Royal Academy and in 1878 he became its President (1878–96). His paintings represented Britain at the great 1900 Paris Exhibition.  Leighton was also  knighted at Windsor in 1878, and was created a baronet.

Leighton was also  'an enthusiastic volunteer soldier', enrolling with the first group to join the 38th Middlesex (Artists) Rifle Volunteers (later to be known as The Artists Rifles) on 5th October 1860. His qualities of leadership were immediately identified and he was promoted to command A Company within a few months. On 6th January 1869 Captain Leighton was elected to command The Artists Rifles by a general meeting of the Corps. In the same year he was promoted to Major and in 1875 to Lieutenant Colonel. Leighton resigned as Commanding Officer in 1883. 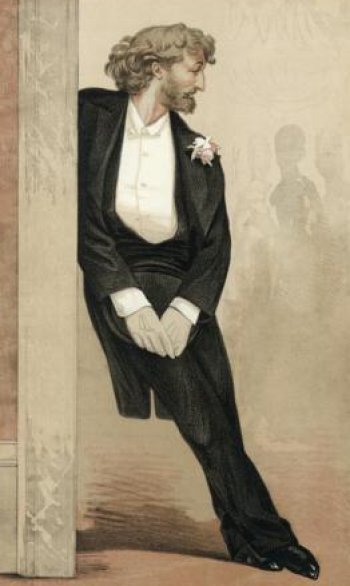 Leighton remained a bachelor and his private life was clouded in mystery most of which he appeared to encourage.  There were rumours of his having an illegitimate child with one of his models, but I suspect this is simply a smoke screen to divert attention away from the reality – Leighton may have been homosexual at a time when it was not terribly good to be homosexual – the tide was definitely against you, as was the law and public opinion.

His involvement with the Rifle volunteers may have been part of the same elaborate smoke screen, a smoke screen that ensured he kept his public standing, which clearly meant a great deal to him.

Wikipedia says he had a 'close relationship with Henry Greville', but as  Leighton left no diaries and his letters are telling in their lack of reference to his personal circumstances, they have no real proof of this.

“No definite primary evidence has yet come to light that effectively dispels the secrecy that Leighton built up around himself”.  But the secrecy itself is of course telling, one is only this secretive if one has something to hide that might deleteriously affect you and your position.

The order creating him Baron Leighton, was issued on 24 January 1896; Leighton died the next day of angina pectoris, so he had a poorly heart – he was just 66.

So maybe the strain of this veneer he had created eventually got to him in the end, poorly hearts are a sure sign of emotional overload, he seems to have lived his life as a sort of lie and it must have told on him eventually.

But from this angst we have some truly memorable, beautiful, symbolic and stunning paintings.

He paints women beautifully but his paintings of them are somehow detached and emotionally unaffecting.  There is no love of the women he painted as in the works of Burne- Jones or Klimt, for him a woman was a decorative addition – a sort of abstract beautiful object.

His women are nearly always clothed.

Anatomically when not clothed they occasionally do not look quite right.  One painting of an unclothed woman depicts her as a siren her lower half masked out by a fish’s tail, her breasts largely hidden,  trying to seduce a very reluctant and truly gorgeous man, whose clothes are somewhat scanty for a fisherman.