Clytia or Clytie ( Κλυτίη) was a water nymph, daughter of Oceanus and Tethys in Greek mythology.  She loved Helios.  Helios, having loved her, abandoned her for Leucothea and left her deserted.

She was so angered by his treatment that she told Leucothea's father, Orchamus, about the affair. Since Helios had defiled Leucothea, Orchamus expelled her from the world of spirits and sent her to Earth.  Ovid tells the story.................


This Clytie knew, and knew she was undone,
Whose soul was fix'd, and doated on the Sun.
She rag'd to think on her neglected charms,
And Phoebus, panting in another's arms.
With envious madness fir'd, she flies in haste,
And tells the king, his daughter was unchaste.
The king, incens'd to hear his honour stain'd,
No more the father nor the man retain'd.
In vain she stretch'd her arms, and turn'd her eyes
To her lov'd God, th' enlightner of the skies.
In vain she own'd it was a crime, yet still
It was a crime not acted by her will.
The brutal sire stood deaf to ev'ry pray'r,
And deep in Earth entomb'd alive the fair.
What Phoebus could do, was by Phoebus done:
Full on her grave with pointed beams he shone:
To pointed beams the gaping Earth gave way;
Had the nymph eyes, her eyes had seen the day,
But lifeless now, yet lovely still, she lay.
Not more the God wept, when the world was fir'd,
And in the wreck his blooming boy expir'd.
The vital flame he strives to light again,
And warm the frozen blood in ev'ry vein:
But since resistless Fates deny'd that pow'r,
On the cold nymph he rain'd a nectar show'r.
Ah! undeserving thus (he said) to die,
Yet still in odours thou shalt reach the sky.
The body soon dissolv'd, and all around
Perfum'd with heav'nly fragrancies the ground,
A sacrifice for Gods up-rose from thence,
A sweet, delightful tree of frankincense.

Tho' guilty Clytie thus the sun betray'd,
By too much passion she was guilty made.
Excess of love begot excess of grief,
Grief fondly bad her hence to hope relief.
But angry Phoebus hears, unmov'd, her sighs,
And scornful from her loath'd embraces flies.
All day, all night, in trackless wilds, alone
She pin'd, and taught the list'ning rocks her moan.
On the bare earth she lies, her bosom bare,
Loose her attire, dishevel'd is her hair.
Nine times the morn unbarr'd the gates of light,
As oft were spread th' alternate shades of night,
So long no sustenance the mourner knew,
Unless she drunk her tears, or suck'd the dew.
She turn'd about, but rose not from the ground,
Turn'd to the Sun, still as he roul'd his round:
On his bright face hung her desiring eyes,
'Till fix'd to Earth, she strove in vain to rise.
Her looks their paleness in a flow'r retain'd,
But here, and there, some purple streaks they gain'd.
Still the lov'd object the fond leafs pursue,
Still move their root, the moving Sun to view,
And in the Heliotrope the nymph is true. 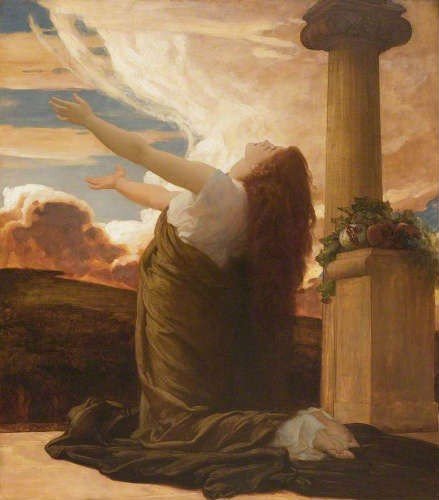