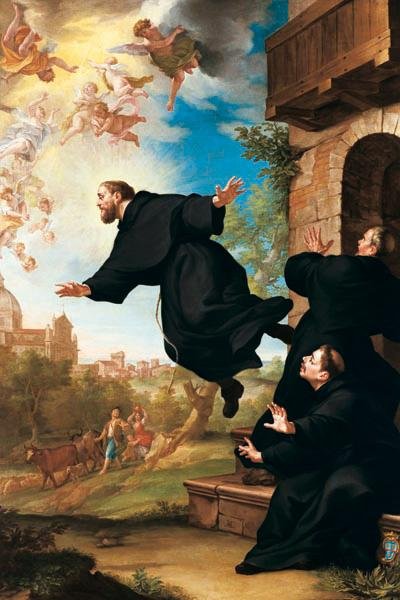 The quotes in this come from the Roman Catholic encyclopaedia

Joseph of Cupertino was an Italian Franciscan friar and is classified by the Roman Catholic Church as a mystic.

Cupertino is where the monastery is that he eventually led his life.  It is based in the small village of Cupertino, in the Diocese of Nardò, lying between Brindisi and Otranto in the Kingdom of Naples.

Joseph appears to have been born brain damaged.  He is described by a number of sources as simple. He is in a sense 'the Fool' in the Tarot. As a consequence he spent a large proportion of his time in the spiritual world and not in the physical.

“In his eighth year Joseph had an ecstatic vision while at school and this was renewed several times; so that the children, seeing him gape and stare on such occasions, lost to all things about him, gave him the sobriquet "Bocca Aperta". [open mouth]

These days, he would probably be diagnosed as autistic, as he appears to display many of the signs of autism.  Joseph might have been an autistic savant, because although he could barely read he was very good at mathematical problem solving.  He had, for example, “a hot and irascible temper which his strict mother strove hard to overcome”. At the age of seventeen he tried to be admitted to the Friars Minor Conventuals “but was refused on account of his ignorance”. He then applied to the Capuchins at Martino near Tarento, where he was accepted as a lay-brother in 1620, but “his continual ecstasies unfitted him for work and he was dismissed”.

His mother and his uncles began to despair of ever finding anything for him to do, but in the end, he found work in the stable as lay help, or oblate, at the Franciscan convent of La Grotella near Cupertino.

“He now gave evidence of great virtues, humility, obedience, and love of penance to such an extent that he was admitted to the clerical state in 1625, and three years later, on 28 March he was raised to the priesthood.”

And so it continued….

His life was now one long succession of visions and other heavenly favours. Everything that in any way had reference to .. holy things would bring on an ecstatic state: the sound of a bell or of church music, the mention of the ... Blessed Virgin or of a saint, any event in the life of Christ, ..., all would put Joseph into contemplation. Neither dragging him about, buffeting, piercing with needles, nor even burning his flesh with candles [sic] would have any effect on him” 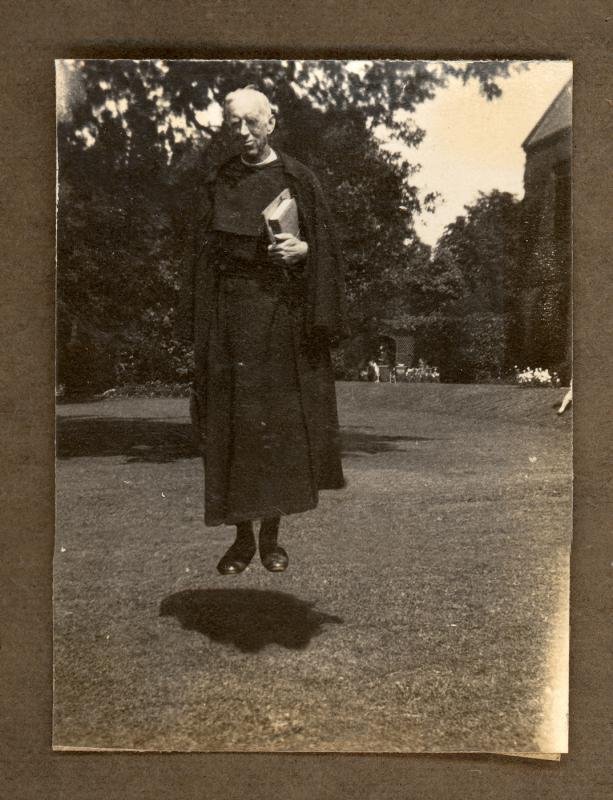 Sabina Mac Mahon, “The Levitation of St. Joseph
of Cupertino” (2010)

Yes, you are reading this right and remember this quote is direct from the horse's mouth.  His fellow monks sound a despicably cruel lot don't they?

So bad did the bullying and persecution become that this poor little lad, already gifted and with no need to do anything except sit and do nothing to be with the angels, ended up practising  “mortification and fasting” sometimes not eating for the whole of Lent – 40 days.  So he suffered and became an anorexic from the emotional pain of all this.

There is no indication what he died of.  But he made it to 60 according to the Catholic Church.

He was beatified by Benedict XIV in 1753, and canonized 16 July 1767 by Clement XIII. There are two biographies, both written after he died – one by Robert Nuti (Palermo, 1678). Angelo Pastrovicchi wrote another in 1773.