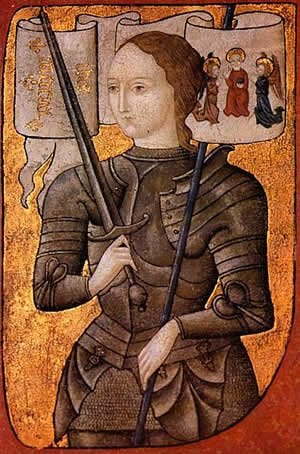 She was born a peasant girl in what is now eastern France. Claiming divine guidance, she led the French army to several important victories during the Hundred Years' War, which paved the way for the coronation of Charles VII of France. She was captured by the Burgundians, transferred to the English in exchange for money, put on trial by the [French] Bishop of Beauvais Pierre Cauchon for charges of "insubordination and heterodoxy",and was burned at the stake for heresy when she was 19 years old.

Twenty-five years after her execution, an inquisitorial court authorized by Pope Callixtus III examined the trial, pronounced her innocent, and declared her a martyr. Joan of Arc was beatified in 1909 and canonized in 1920. She is – along with St. Denis, St. Martin of Tours, St. Louis IX, and St. Theresa of Lisieux – one of the patron saints of France.

The cause of Joan of Arc’s visions remains a controversial issue, with many suggestions including migraine, schizophrenia, even TB which seems a little daft given her active lifestyle. The theory of migraine seems also to be somewhat suspect given the fact she had no headaches. Schizophrenia is possible, but most schizophrenics go well under and cannot do what Joan of Arc did, so we are left with epilepsy and Oliver Sacks has suggested it seems to fit best with epilepsy. In fact one could simply say she suffered from brain damage of an unspecified nature and it would be sufficient. I have used Oliver Sack’s observation to demonstrate the effects.