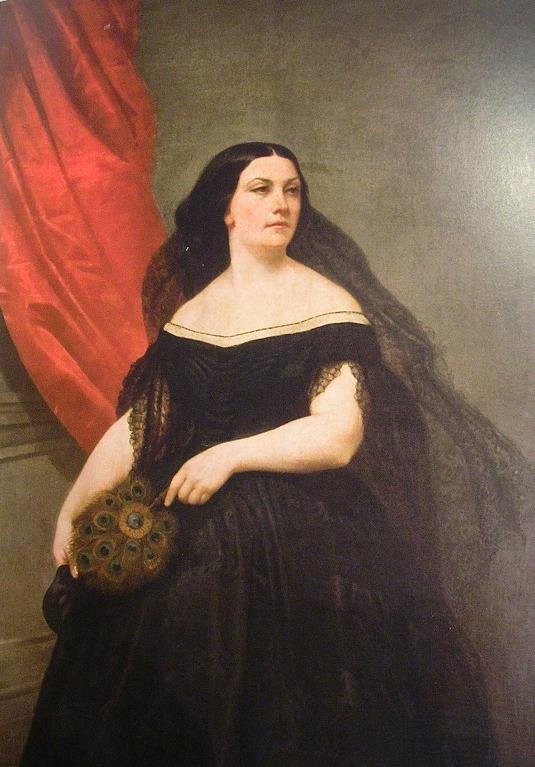 Grisi as Donna Anna in Don Giovanni by Mozart

Giulia Grisi (22nd May 1811 – 29th November 1869) was an Italian opera singer, the younger sister of Giuditta Grisi and cousin of ballerina Carlotta Grisi.  She performed extensively in Europe, the United States and South America and is widely considered to be one of the leading sopranos of the 19th century.

Her voice was described as a ‘dramatic soprano’ which, during her prime, was praised by music critics for its exceptional beauty, evenness and smoothness. Her career spanned 30 years in total.

Both Guilia and Giuditta had remarkable singing voices.  Guilia’s voice was described as ‘perfectly placed and even over a range of two octaves, c’ to c’’’.  Elizabeth Forbes [Mario and Grisi London 1985] said that she easily made the transition from the ‘florid writing of Rossini and Donizetti’ to the ‘more forceful style of Verdi and Giacomo Meyerbeer.’  Indeed, the ‘prickly press commentator’ Henry Chorley praised both her and her partner Mario for their success in establishing Italian opera as an important component of the London music scene.

Grisi was also described as an impressive singing actress, magnificent in such roles as Donna Anna, Semiramis and Norma, ‘where her passionate involvement was allowed full scope’,

She is on the site because her death produced a spiritual experience, not unusual in its type, but of interest because although highly talented, there is nothing to indicate she was especially spiritually inclined. 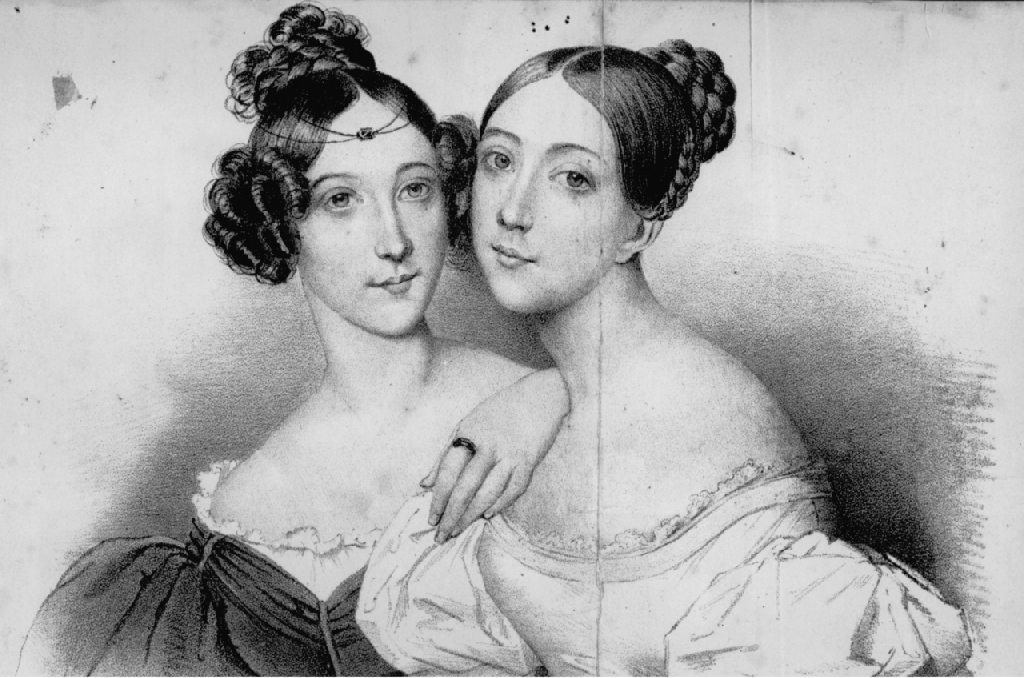 Life and Career in brief

Born in Milan, Giulia Grisi was the daughter of Gaetano Grisi (c1810–1871), one of Napoleon's Italian officers, and Giovanna née Grassini. She came from a musically gifted family, not only her sister, but her maternal aunt Giuseppina Grassini (1773–1850) was a favourite opera singer both on the continent and in London. 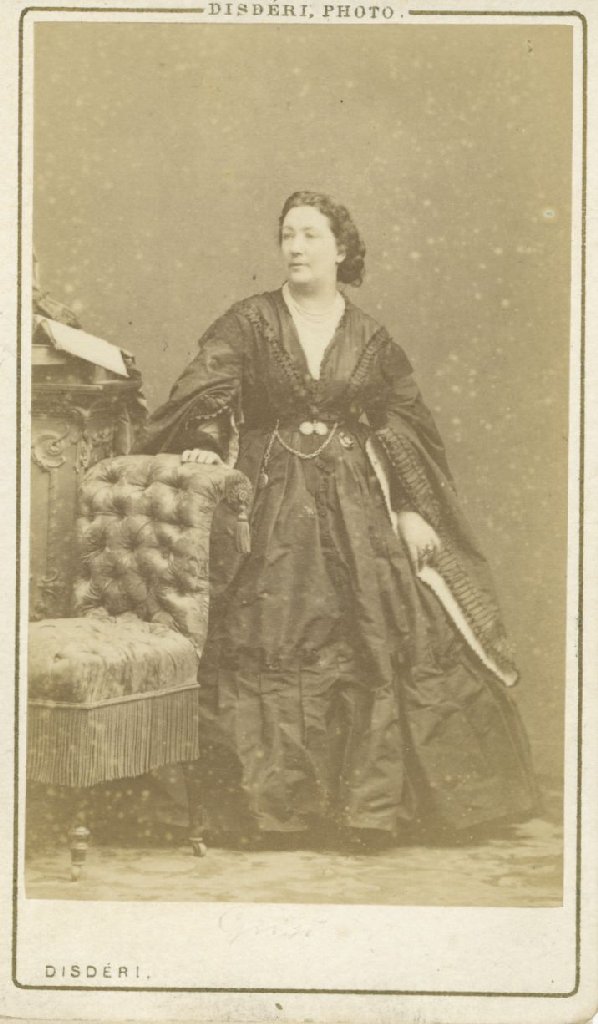 Grisi studied with the composer M A Marliana and with Giacomelli in Bologna, where she made her debut in the 1828-9 season in Rossini’s Zelmira.  She also sang in his Torvaldo e Dorliska and the Barber of Seville, as well as Giacomo Cordella’s Lo sposo di provincia.

After singing at the Pergola, Florence, she made her debut at La Scala in the first performance of Feliciano Strepponi’s Ulla di Bassoura, also creating Adalgisa in Norma and Adelia in Donizetti’s Hugo conte di Parigi.  But she then left Italy, never to sing there professionally again.

She performed in Paris – Desdemona, Guilietta, Anne Boleyn, Ninettta and Ellen.  And in 1834, made her London debut at the King’s theatre.  From 1835 until 1847, except for 1842, she alternated between Paris and London creating many new roles.  She later transferred to Covent Garden.  In 1842, Donizetti wrote the parts of Norina and Ernesto in Don Pasquale for Grisi and Giovanni Matteo De Candia, usually known by his stage-name of Mario, who was to become the love of her life.  The tenor Mario was her professional partner in many of these operas and became her lifelong companion. 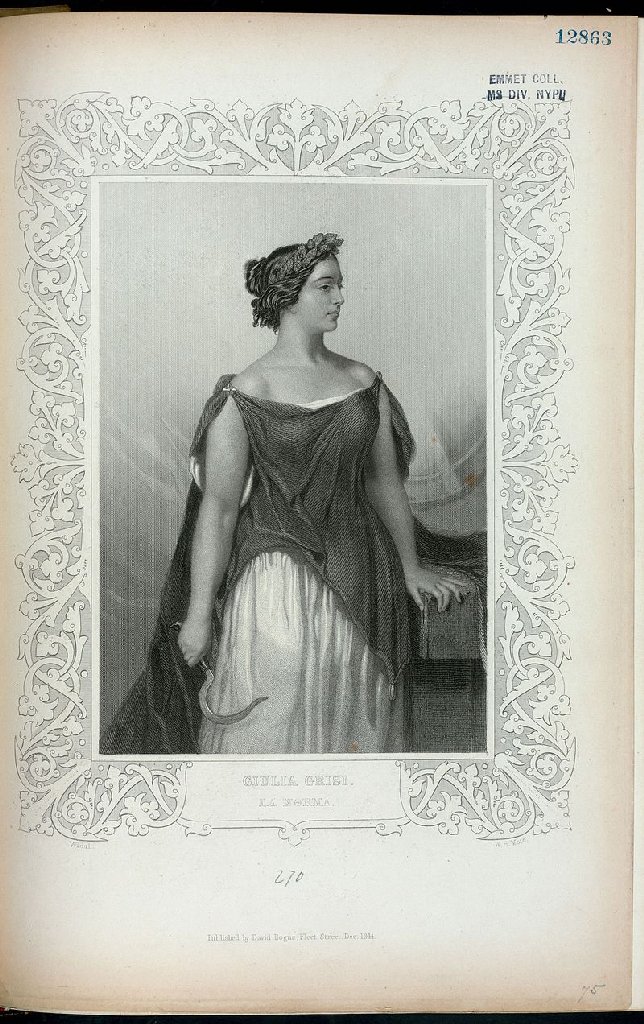 Grisi married Count Gérard de Melcy in 1836. The marriage was unhappy, but he refused her a divorce for some years.

In 1838, her husband discovered a letter written to her by Frederick Stewart, 4th Marquess of Londonderry (then Lord Castlereagh) and the two men fought a duel on 16 June of that year. Lord Castlereagh was wounded in the wrist; the Count was uninjured.

After the duel, Grisi left her husband and began an affair with Lord Castlereagh. Their son, George Frederick Ormsby, was born in November 1838 and brought up by his father, who had no legitimate children by his wife. After Grisi and Lord Castlereagh's relationship ended, he brought their son to see her whenever she was in England.

Whilst living with "Mario" Giovanni de Candia before their marriage, Giulia and Mario kept homes in Paris and London. Eventually, Grisi obtained her divorce and married Mario, with whom she had six daughters - and this is relevant to the observation as we shall see.

Once married, they returned to Italy and lived at the Villa Salviati (it) in Florence, a property Mario had purchased in 1849. Grisi wrote in her diary of the exciting times spent there with distinguished guests drawn from the world of opera and the aristocracy. 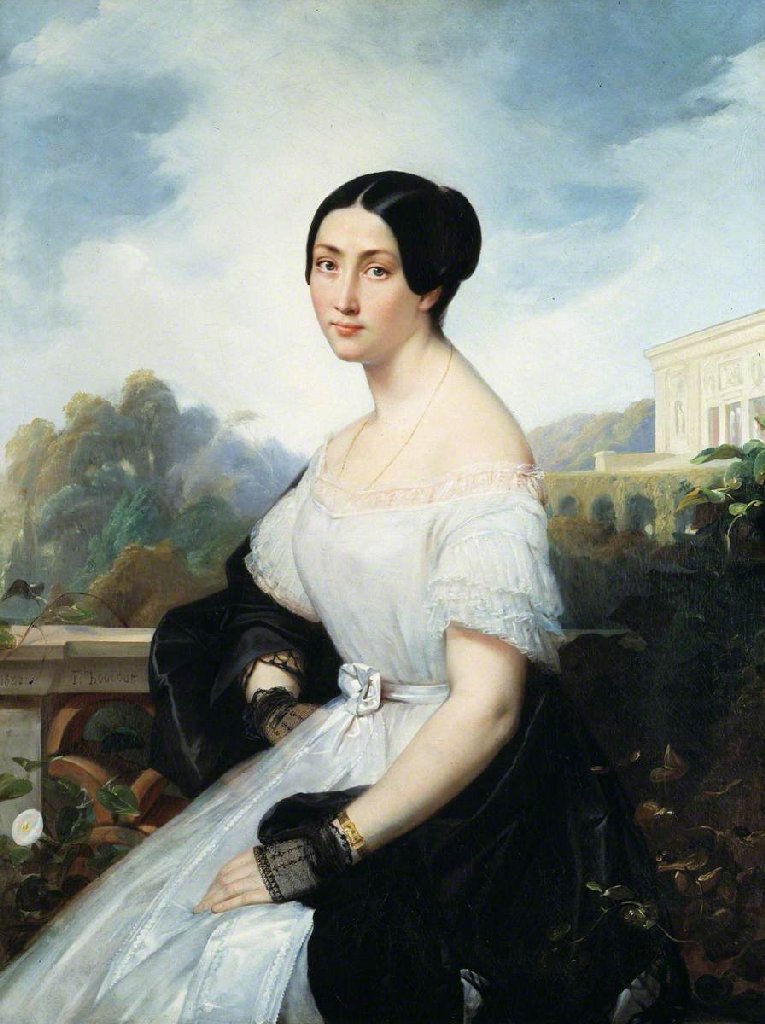 During a trip to Saint Petersburg, Russia, while travelling by train with her family, Grisi was involved in an accident after having crossed the border into Germany. She was taken to a hotel in Berlin, where she spent her last days under the care of a Dr. Isabell.

Her husband took her body to Paris, where she was buried at Père Lachaise Cemetery.

Her tomb stands before that of Molière, marked with a plain white stone with the inscription "Juliette de Candia".

Cecilia Maria de Candia, one of her daughters with Mario, became a recognized writer and married an English gentleman, Godfrey Robarts Pearse, Lord Pearse, and in 1910 published the book The Romance of a Great Singer – A Memoir of Mario.  It is from this book that  the observation comes.