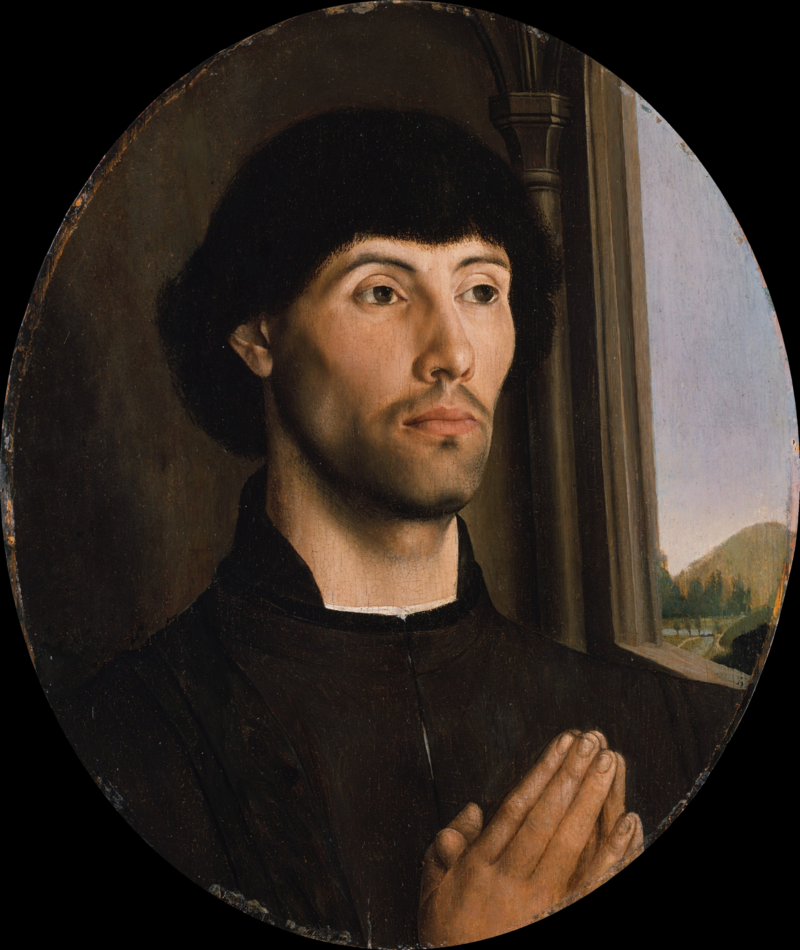 He was, along with Jan van Eyck, Rogier van der Weyden, Hans Memling and Dieric Bouts, one of the most successful Flemish painters of the late 15th century. He was also a very prosperous painter, securing important commissions from the Burgundian court, church institutions, affluent Flemish bourgeoisie and Italian business associations that were located in the Burgundian Low Countries.

He introduced important technical innovations such as a ‘new monumentalism, a specific colour spectrum and an individualistic manner of portraiture'. The presence of his masterpiece the Portinari Triptych in Florence from the late 15th century onwards played a role in the development of realism in Italian Renaissance art.

But he had some sort of experience that changed his life – a truly dramatic experience and he also subsequently went mad.  He entered a monastic establishment - the Red Cloister – and it appears that ‘the tension between his contemporary fame as an artist and the ideals of the community’, resulted in him developing an ‘obsession with divine judgement’.  Or at least that is the standard interpretation put on his madness, but there may be other explanations, as we shall see. 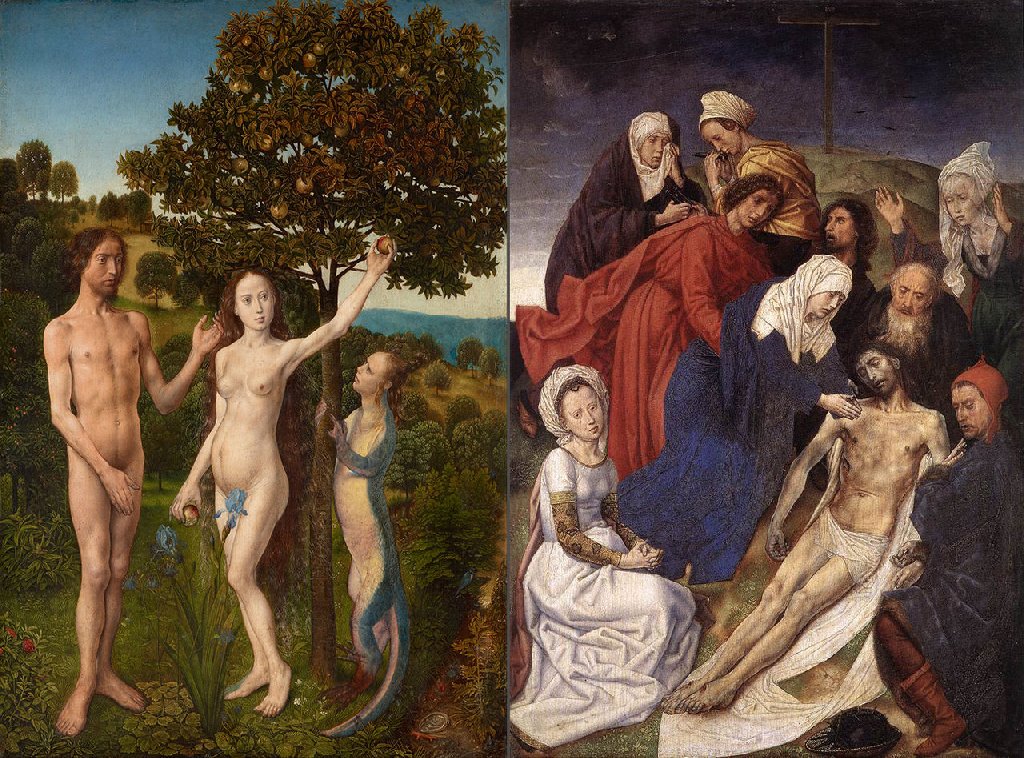 Up until 1477, van der Goes worked as a very busy painter in Gent, undertaking civic and religious commissions.  In 1467, he became a master in the painters' guild in Ghent and in 1468, for example, the artist was commissioned by the city of Ghent to execute some works in connection with the grant of the Great Indulgence of the city. In the following years, van der Goes created further decorations such as papal blazons at the behest of the city. 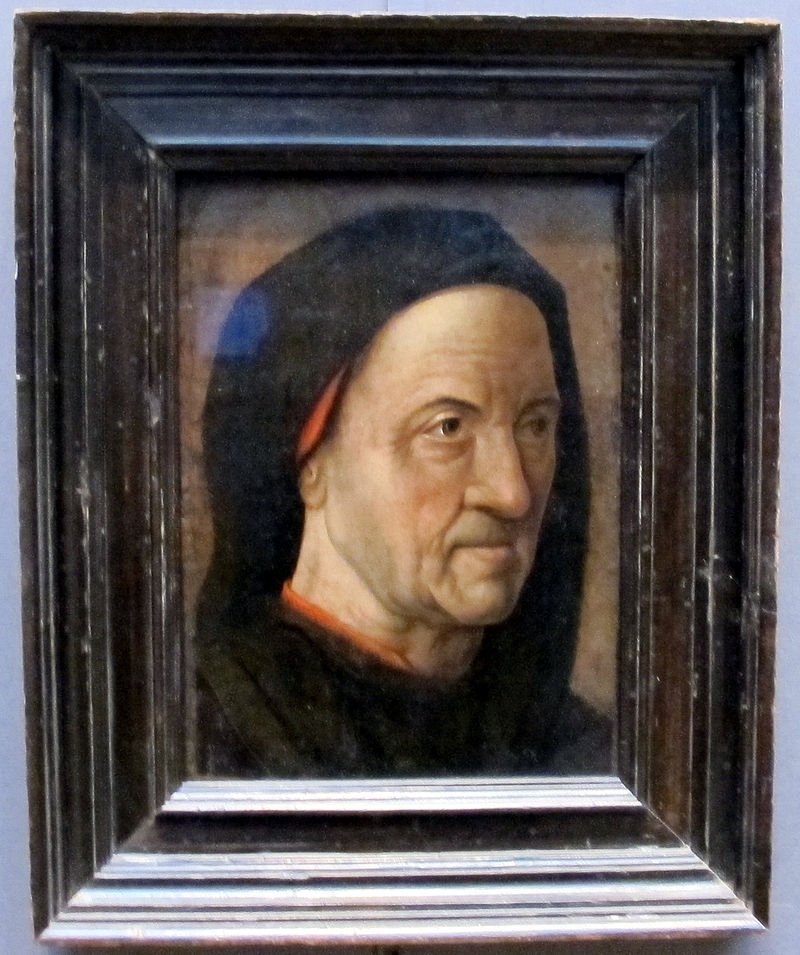 In 1468 he was in the town of Bruges making decorations to celebrate the marriage between Charles the Bold and Margaret of York. Van der Goes and his workshop worked on commissions of the city of Ghent to provide heraldic decorations for Charles the Bold's Joyous Entry in Ghent in 1469 and later in 1472.

When in 1470 Joos van Wassenhove left Ghent for Italy, van der Goes became the leading painter in Ghent. In 1473 the Burgundian court paid van der Goes for the paintings and blazons on the occasion of Charles the Good's funeral. The painter was repeatedly elected as deacon of the Ghent painter's guild and served as its deacon from 1474 to 1476.

Conversion and withdrawal to a  monastic life 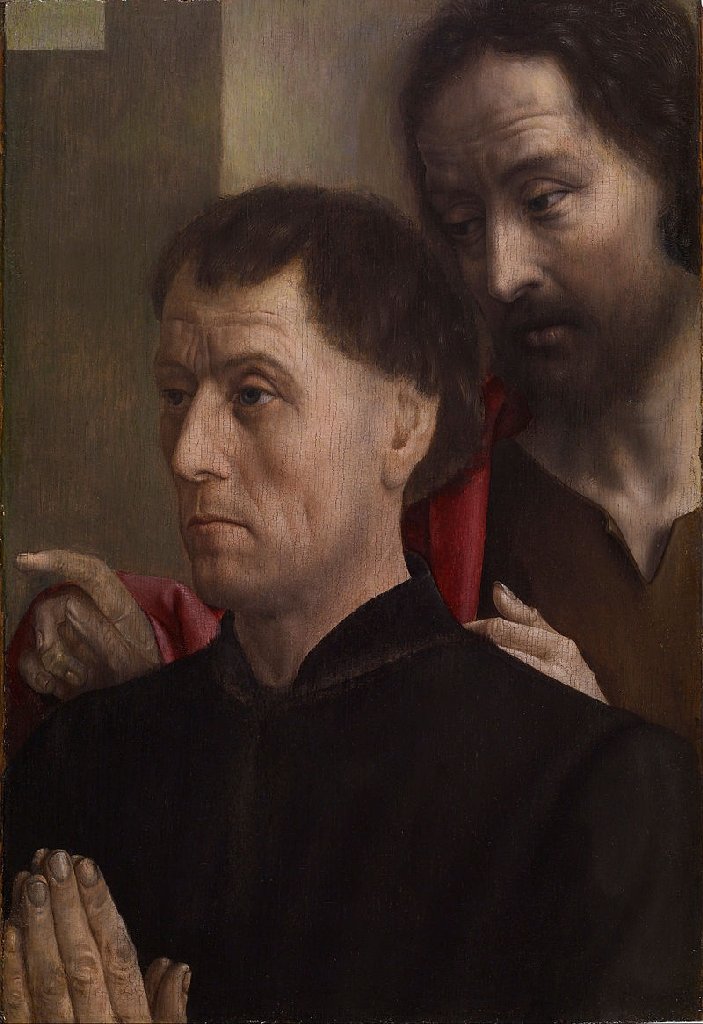 voices, visions and paranoia - just look at that demonic
hand on his shoulder .  Officially Hugo van der Goes -
Portrait of a Man at Prayer ....

And then, at the highpoint of his career, in 1477, van der Goes closed up his studio in Ghent to become a frater conversus (i.e. a lay brother) at the monastic community of the Rood Klooster (or Rooklooster) near Auderghem (now in Brussels).  A conversus brethren cannot leave the cloister for one year after vows and no more than eight conversi are allowed per house.  So something had happened to him to make him take this very major step.

Most of the paints used by painters in those days were based on heavy metals and quite a number of van der Goes’s contemporaries were also affected, their health in general declined and in some cases they too went ‘mad’.  So we can speculate that this might have had some effect.  But there is more.

At the monastery he was allowed to continue working on painting commissions, but to all intents and purposes he lived the life of an ascetic from that point on.

The Red Cloister [Rookloste, Roodendale, Rouge-cloitre, Rubea Vallis] belonged to the Windesheim congregation, but was originally a foundation of the Augustinian Canons Regular. It was one of a number of religious communities of the late fourteenth and fifteenth centuries in the Low Countries and Germany which came under the influence of the ideals of the Devotio moderna. 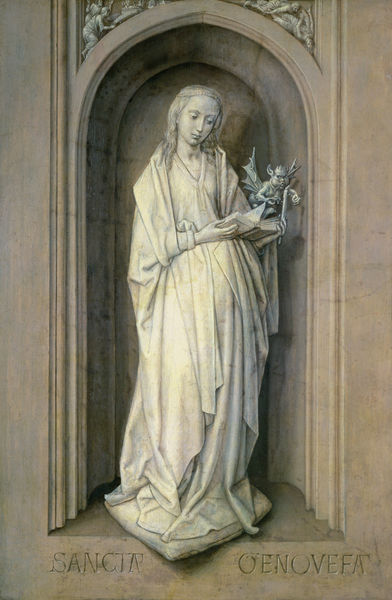 The first monastery at Windesheim was founded in 1386 by six pupils of Gerard Groote (1340-1384). In 1393 the Windesheim congregation was formed by amalgamation with three other Dutch monasteries, and the constitution was confirmed at the Council of Constance. The Red Cloister, in the forest of Soignes near Brussels, was affiliated in 1438 to a congregation which had numbered forty-five monasteries by 1430, and ninety-seven by 1500. The total number of brothers in the Red Cloister might have been twenty-five, of whom up to eight might be conversi at any one time.

Strict enclosure was the rule for the Windesheim congregation, with a choir obligation, fast and abstinence four times a week, and the systematic practice of meditation. It is likely that the brethren were particularly sensitive to the influence of the mystic Jan van Ruysbroeck (d. 1381), who had lived at the monastery of Groenendals, very near to the Red Cloister. The focus of their devotions was the humanity of Christ (Thomas a Kempis was another powerful influence). Ascetic in their impulses, the brethren stressed the need for introspection and self-communing, and rejected scholastic learning for its own sake. Manual labour was encouraged, as was the writing and copying of books, illumination, and the production of biblical texts in the vernacular. Devotional reading of the Bible was preferred to elaborate liturgy and ornate music. 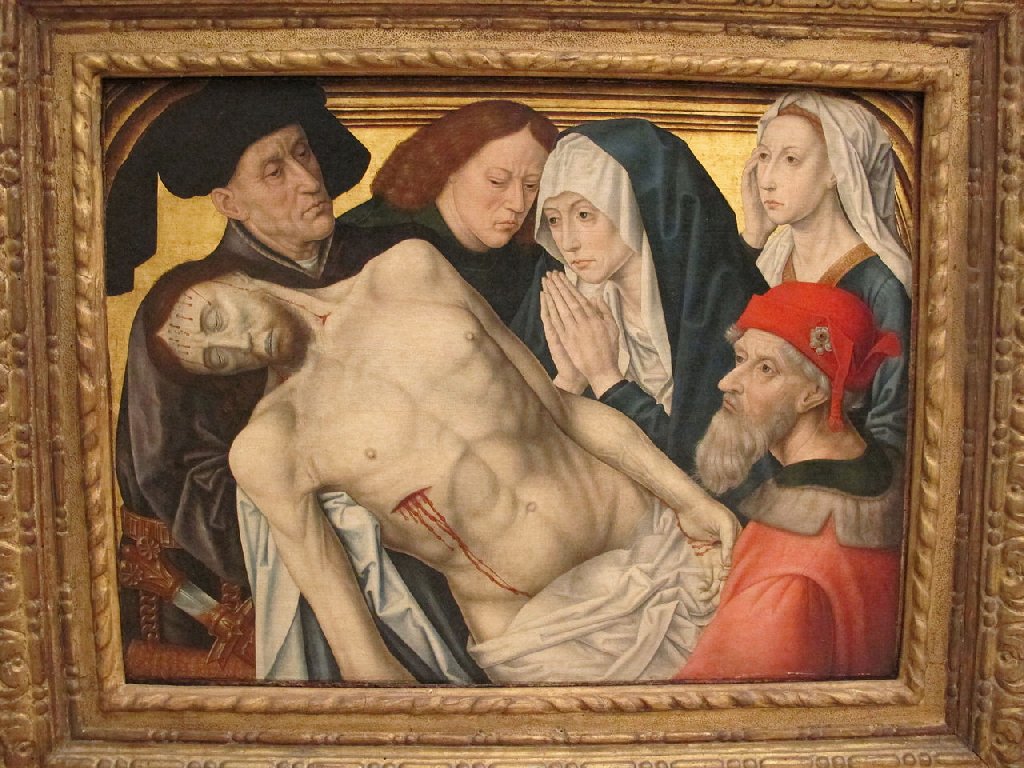 The trip to Cologne

A few years after his profession, five or even six, it so happened that this convert brother set out for Cologne, if I remember rightly accompanied by his half brother Nicholas who had also professed here and who was a lay brother (an oblate), by brother Peter who was a canon regular at Marienthron (at that time he dwelt in the Jericho monastery in Brussels) and by others as well.

As I then learned from the account of his brother Nicholas, the lay monk, on a certain evening on the way back, our brother convert Hugo incurred a strange mental disease, as a result of which he kept saying that he was a lost soul and was adjudicated eternal damnation; furthermore he was intent on injuring himself physically and committing suicide (and would have done so had he not been forcibly restrained by those who were standing by to help).

As a result of this strange disease the end of that trip was overshadowed by heavy sadness.

They then reached the city of Brussels in their quest for help and without delay summoned Prior Thomas thither. The latter, after confirming everything with his own eyes and ears, suspected that he was vexed by the same disease by which King Saul was tormented. Thereupon, recalling how Saul had found relief when David plucked his harp, he gave permission not only that a melody be played without restraint in the presence of brother Hugo, but also that other recreative spectacles be performed; in these ways he tried to dispel the delusions. But under such treatment brother Hugo found no relief but still delirious pronounced himself the son of Perdition. Consequently in this miserable condition he entered this house.


We are not told by Ofhuys how and when Hugo emerged from his illness, only that the choir brothers cared for him subsequently. Hugo had entered the Red Cloister in 1477, and died in 1482, not very long after the incident Ofhuys describes. It is probable that at least one of Hugo's paintings , the Death of the Virgin, now at Bruges, was painted at this time.

The reasons for his experiences 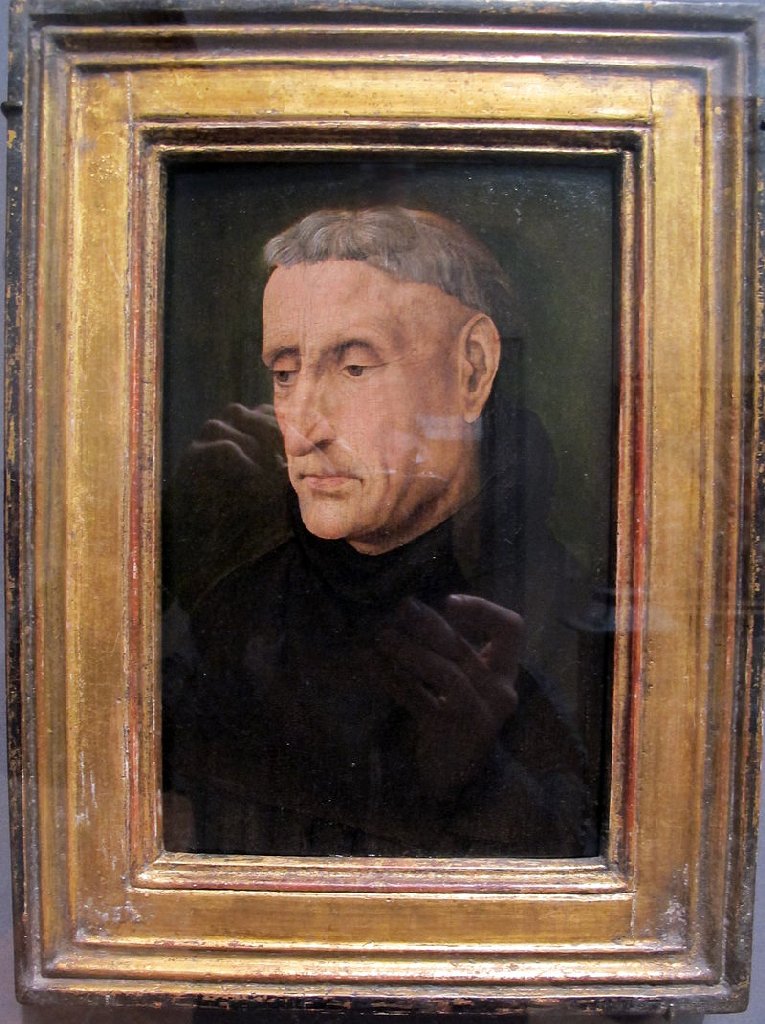 So what reasons have we got for the sudden conversion and the descent into madness?

There is a major clue we gain from Ofhuys and that is that he was a great wine drinker.  One of his dispensations in the monastery was that he was still allowed to drink wine.

Wine at the time was often full of lead.  It was used to sweeten white wines and lead vats were use for fermentation [see lead poisoning], so we have a double source of heavy metal poisoning.  Paint and wine.  It is noticeable that it was only the affluent able to afford wine that suffered in this way and van der Goes was a successful painter.  But he could also have been an alcoholic.  But the final list for the activities that contributed to his madness is truly impressive:

And his paintings show what he saw.