Phineas P. Gage (July 1823 – May 21, 1860) was an American railroad construction foreman who survived an accident in which a large iron rod was driven completely through his head. On September 13, 1848, 25-year-old Gage was foreman of a work gang blasting rock while preparing the roadbed for the Rutland & Burlington Railroad outside the town of Cavendish, Vermont.

After a hole was bored into a body of rock, one of Gage's duties was to add blasting powder, a fuse, and sand, then compact the charge into the hole using a large iron rod. Whilst he was tamping the powder with the rod, the powder exploded, projecting the rod which was “an inch and a fourth in [diameter], and three feet and [seven] inches in length through the side of his face, past the back of the left eye [leaving him blind in this eye], and out at the top of the head. The end which entered first was pointed and then tapered, “circumstances to which the patient perhaps owes his life”

The first physician to arrive was Dr. Edward H. Williams:

I first noticed the wound upon the head before I alighted from my carriage, the pulsations of the brain being very distinct. .... Mr. G. got up and vomited; the effort of vomiting pressed out about half a teacupful of the brain, which fell upon the floor.

About an hour later Dr. John Martyn Harlow took charge of the case and it is to him that we owe the most reliable accounts of the effects at the time and also sometime later.

The principal damage was to the brain's left frontal lobe.  The reconstruction of the damage done long after Gage had died but based on his skull, is shown below.  There might have been damage to the temporal lobe too given the angle, but if there was it would have been to the anterior temporal lobe, not the posterior regions. 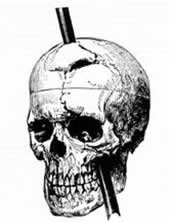 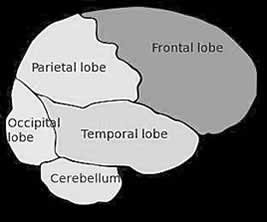 For a further explanation of the following refer to the Brain and its functions.

If there is damage to the frontal lobe and very specifically the front rather than the back frontal lobe [which houses the motor cortex] then the reasoning function may be affected.

Because of the close proximity of the parietal lobe it may have been affected too.  If there is damage to the parietal region of the brain it will produce nervous sensory deprivation eliminating tactile sensory information such as pressure, touch, and pain.  This damage may thus have helped Gage with pain control.

Although blinded in one eye, Gage was still able to see with the other eye.

Damage to the superior temporal gyrus – associated with auditory stimulus processing – will eliminate auditory sensory input and may result in auditory hallucinations.  But again only one side was affected, as such he could hear.

There looks as though there would have been no damage to the thalamus - which processes and relays movement and sensory information – so his other senses would have worked Ok.

Damage to the left temporal lobe serves to inhibit memory and aid spiritual experience by knocking out those aspects of memory which are used for reasoning.  But it is damage to the  left posterior region of the medial temporal lobe that may cause a spiritual experience by limiting memory recall and retrieval.  From the reconstruction the damage would have been to the anterior not posterior.  What may also get wiped out here is learnt function and thus many behavioural functions associated with manners and how to behave sexually with people.

The Inferior temporal lobe  is involved in the laying down of perceptions or even some perception processing and any damage here would be somewhat disastrous, but again it would appear that there was none.  Similarly, the hippocampus appears to be where perceptions are stored, as such any damage to the hippocampus may be catastrophic, but again there appears to have been no damage.  The will is key to our survival and also determines which process is performed next, including that of the composer.  The hypothalamus appears to be the seat of will based processing, this too would not have been affected.

And all this is confirmed by the reports which seem to indicate that Gage lost some of his ability to reason, some learnt function, but otherwise was able to carry on and function remarkably well.  The most noticeable effect was to his behaviour which changed dramatically.

For example, directly after the accident Gage spoke within a few minutes, walked with little or no assistance, and sat upright in a cart for the 3/4-mile ride to his lodgings in town.  Dr. Edward H. Williams again:

Mr. Gage, during the time I was examining this wound, was relating the manner in which he was injured to the bystanders.

So he had not lost motor control, or the ability to talk.

But he did lose quite a number of behavioural functions as is evidenced by the account given by Dr Harlow later………..

Harlow, John Martyn (1868). "Recovery from the Passage of an Iron Bar through the Head."

The equilibrium or balance, so to speak, between his intellectual faculties and animal propensities, seems to have been destroyed. He is fitful, irreverent, indulging at times in the grossest profanity (which was not previously his custom), manifesting but little deference for his fellows, impatient of restraint or advice when it conflicts with his desires, at times pertinaciously obstinate, yet capricious and vacillating, devising many plans of future operations, which are no sooner arranged than they are abandoned in turn for others appearing more feasible. A child in his intellectual capacity and manifestations, he has the animal passions of a strong man. Previous to his injury, although untrained in the schools, he possessed a well-balanced mind, and was looked upon by those who knew him as a shrewd, smart businessman, very energetic and persistent in executing all his plans of operation. In this regard his mind was radically changed, so decidedly that his friends and acquaintances said he was "no longer Gage.”

The loss of some of his capacity to reason and his loss of memory thus had severe  effects.

Harlow described the pre-accident Gage as having been hard-working, responsible, and "a great favorite" with the men in his charge, his employers having regarded him as "the most efficient and capable foreman in their employ." But these same employers, after Gage's accident, "considered the change in his mind so marked that they could not give him his place again".

Once recovered he was able to take up employment again.  Later in his life he became a stagecoach driver in Chile indicating that Phineas eventually "figured out how to live" despite his injury, and was able to adapt and work round his injuries.

In 2009 a daguerreotype portrait of Gage was identified – the first likeness of him known. It shows "a disfigured yet still-handsome" Gage with one eye closed and scars clearly visible, "well dressed and confident, even proud" and holding the bar. 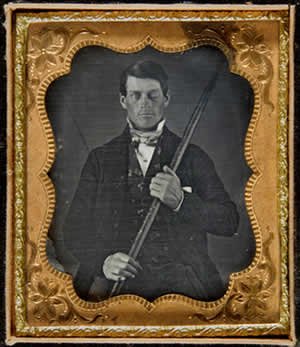