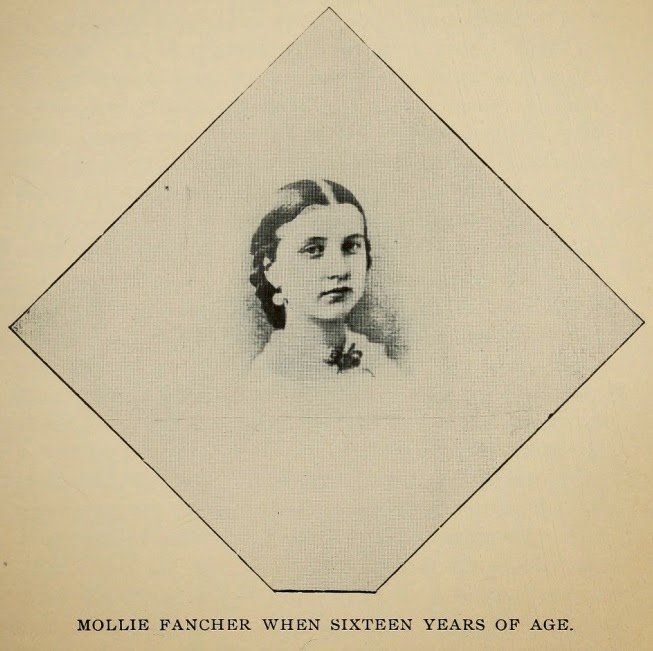 Mary J. "Mollie" Fancher (August 16, 1848 – February, 1916), otherwise known as the "Brooklyn Enigma", was best known for her claim of not eating, or eating very little for extended periods of time.

Mollie Fancher was born in Massachusetts in 1848. Her parents moved the family to Brooklyn, New York, in 1850, and Mollie began her education in a private school there a few years later. Mollie’s mother died in 1855, and her father remarried and abandoned Mollie and her siblings to be raised by their aunt, Susan Crosby.

Mollie did well in school and was considered very attractive by the standards of her day. Two months prior to her graduation, she fell ill, suffering from nervous indigestion, generalized weakness and fainting spells. Her doctor prescribed horseback riding to cure her, which was for centuries thought to be a solution for “hysteria” in women. While riding, Mollie was thrown from her horse, hit her head on a curbstone, knocking her unconscious, and broke several ribs.

She might have recovered from the horse accident and led a normal life, but a little over a year later, in 1865, she suffered another traumatic accident. Mollie was engaged to be married and was out shopping for wedding-related items. When she stepped off a streetcar near her home, her dress got caught on the rear of the car and she was dragged a city block before anyone noticed her. Her suitor broke off their marriage plans, and she was put to bed to heal. She never left her bed, spending the remaining 51 years of her life there, as she suffered varied and strange ailments that baffled observers and physicians alike.  By the late 1870s, she was claiming to eat little or nothing at all for many months. Her claim to abstinence from food lasted for 14 years.

If one looks at the photos, one would be forgiven for thinking she was lying and all this was some rather elaborate hoax.  But there is an added twist to her story.  She suffered from multiple personality disorder, meaning that once the other personalities took over, she would have had no recollection of having done anything anyway.

In 1875, she fell into unconsciousness for a month and then awakened with no memory of the last nine years. None of the works of art she had done looked familiar to her, and she resumed conversations where they had left off nine years before. She began to splinter into several “selves,” some cheery and bright, while others were jealous and vindictive. The personalities would write letters to each other – in different handwriting.

Besides the normal Mollie Fancher known to those who visited her in the daytime, her very intimate friends, and in particular her aunt, were acquainted with no less than five other Mollie Fanchers, who manifested themselves with varying frequency. One of them persisted for nine years (1866 to 1875), during what she was accustomed to refer to as her "great trance," but when that crisis was over, this personality never came to the surface again. During the nine years period spoken of, her right arm was rigidly bent in such a position that the hand was fixed over the back of the head. She had some control of the thumb and index finger, and in order to do her work of flower making, sewing, etc., she had to bring up her left arm, of which she retained full use, to meet the right hand at the back of her head. The work which she learned to do in that position, … was extraordinarily delicate and minute. When, however, this condition passed, she remembered absolutely nothing of all that had happened to her during those nine years, and the skill which she had acquired in her craftsmanship was as if it had never been. She had to begin to learn her flower work all over again. 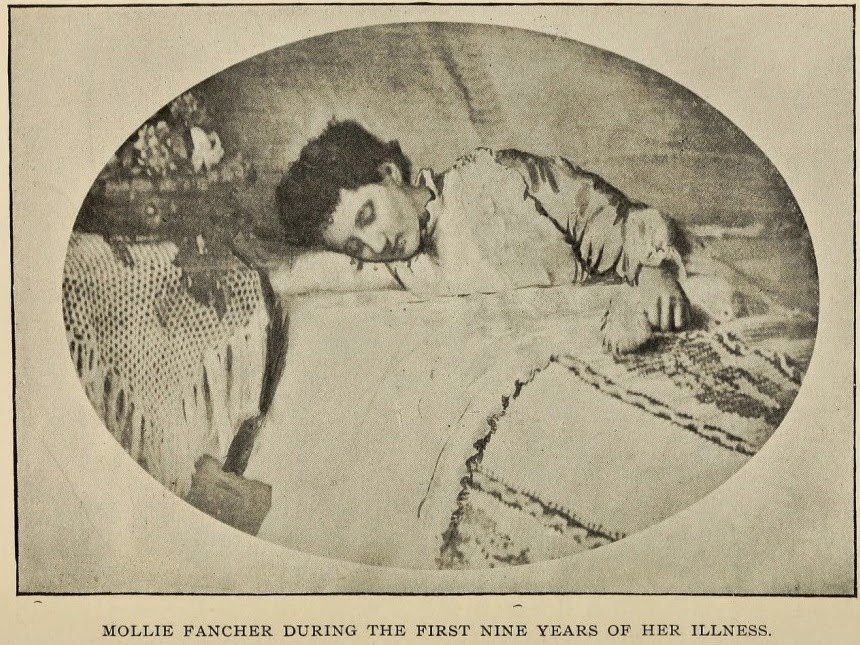 As a result of the accidents, Mollie Fancher lost her ability to see, touch, taste, and smell. But she gained powers that involved her being able to predict events as well as to read without the ability of sight.

There are witnesses to these phenomena, but there is also another very good reason to believe her.  Apart from being genuinely very ill and in a great deal of pain, she wanted no money for all the 'revelations' which to her were private experiences, and she hated publicity.  Bedridden as she was, she had a great deal of difficulty avoiding visitors, but she did her best.

A certain Professor C. E. West, the head of Brooklyn Heights Seminary, was an intimate and very early friend of hers. A letter of his to the Buffalo Courier in 1878, while describing her as "a most devout Christian who shrinks from any public exhibition", mentions that "spiritualists and curiosity-seekers have sought access to her, but have failed. Her power of discriminating character is so great that she is rarely, if ever, imposed upon".

The downside to this lack of access is that very few details are preserved for us of the experiences Mollie received during her sojourns "with friends in most heavenly places."  Many appear to be out of body experiences, but the poor lady also appears to have had near death experiences as well - more than one, which might give some indication how ill she was.

Mollie Fancher was born in 1848.  Her life was spent at her aunt's home in Brooklyn, New York, and she died in the same house shortly before the end of the last century. She seems to have been a tuberculous subject from childhood, but as the result of two very serious accidents in 1865 and 1866, not long after leaving school, she became an incurable invalid and never for more than thirty years quitted her room or, practically speaking, her bed. 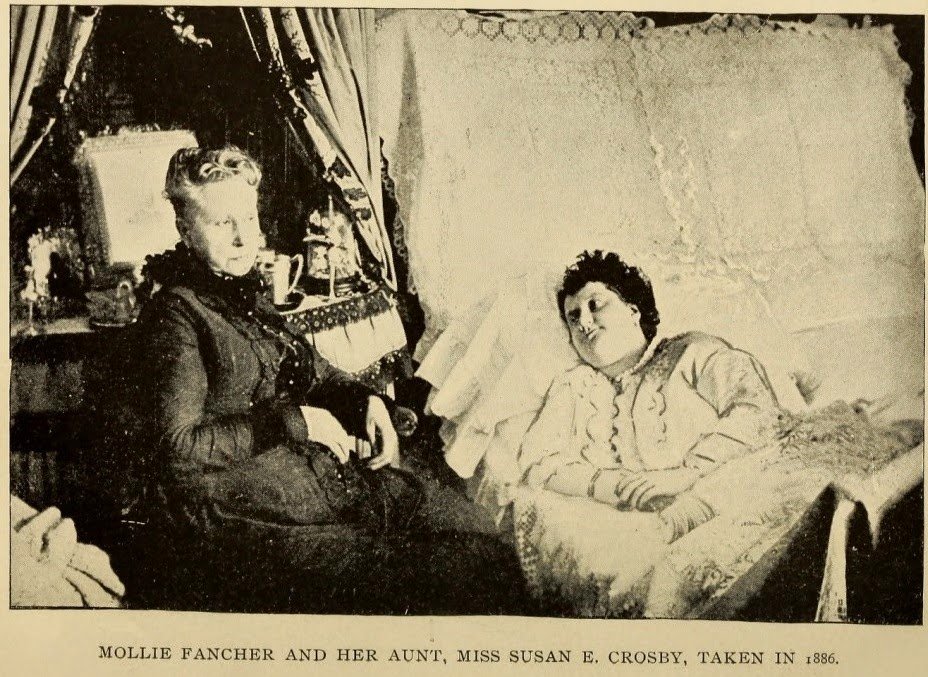 Her lower limbs, being bent under her, became twisted and atrophied, and this was followed by permanent blindness and a complication of nervous disorders which had curious manifestations. For long years she was incapable of swallowing and lived almost completely without food, but in this crippled state she developed remarkable clairvoyant faculties.

It was alleged that she often discerned what was happening in distant towns, that she had knowledge of the contents of sealed letters, that she could read books with great rapidity by passing her hand over the printed page, and it seems certain that she executed the most delicate artistic work in a position over her head-the only position which her paralysed arm rendered possible-where even the full use of her eyes could not have served her. Further, many witnesses attest that she could distinguish, with unerring accuracy, by touch alone the colours of the worsteds, the wax sheets, and other materials she employed in her work. 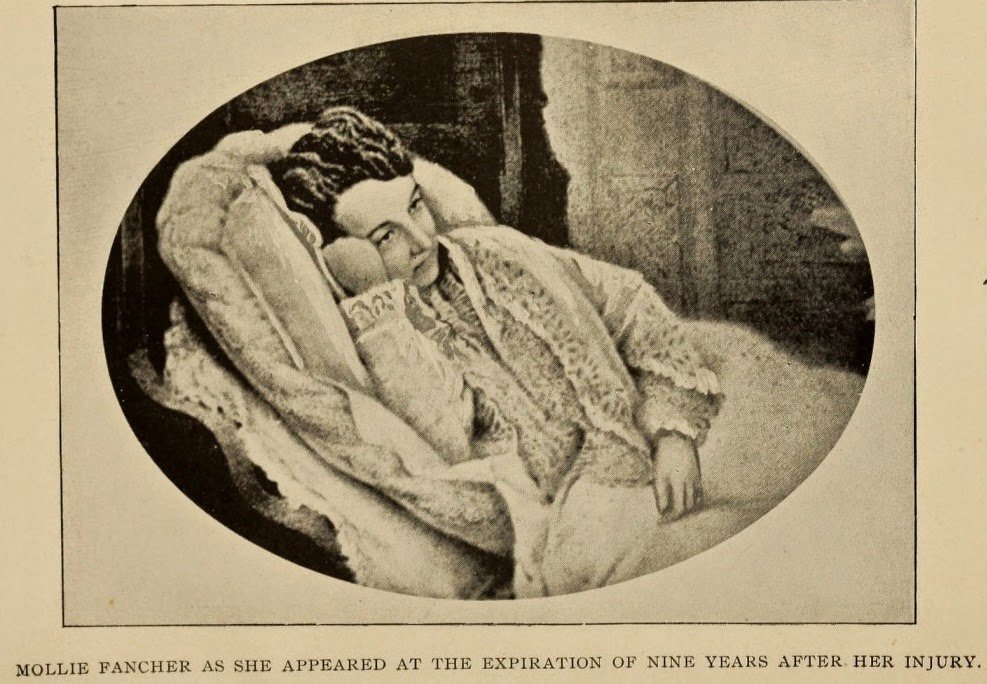 In addition to this there were manifested in her four separate personalities, each with distinctive characteristics and a handwriting which differed from that of her normal state. She never in any proper sense slept, but these personalities revealed themselves during the night-not, apparently, in the daytime-their appearance being ushered in by violent convulsions and a trance condition which was frequently cataleptic.

What lends exceptional importance to Miss Fancher's experiences is the fact that she had no interest in, or sympathy with, anything which bore the name of Spiritualism. She seems to have been a very religiously minded woman, and several of her most trusted friends were ministers-either Presbyterian or Baptist-in whose eyes any attempted communication with the spirits of the dead savoured of devilry.

Padre Secchi, S.J., 1877, from the Observatory of the Collegio Romano

I never knew a more truthful, sincere and intelligent girl than she has proved herself from the very first of our acquaintance. ... I have spent my life in study and I have devoted much of it for the past twelve years to Mollie Fancher's case. 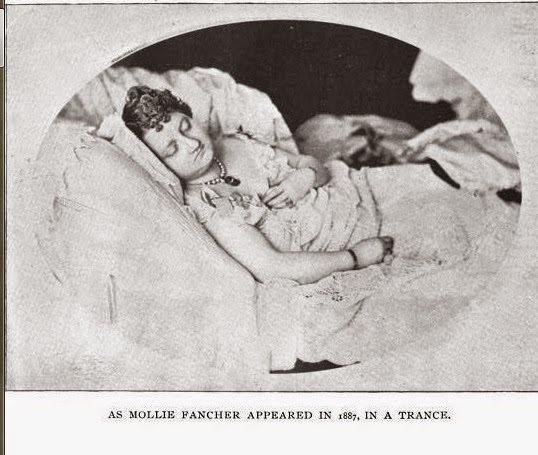 The book in which the available testimonies are printed, a book which is unfortunately almost the only available source of information regarding Mollie, was compiled by "Judge Abram H. Dailey."

This title seems to imply some sort of official legal position, but whether on account of the writer’s advanced age or some other reason, it is not the kind of book which one would expect from a man accustomed to marshal evidence and estimate its value. The narrative is confused, ill-written, full of repetitions and by no means free from misprints, especially where dates occur.

If the volume represented nothing but Judge Dailey's impressions one might be pardoned for thinking the whole record worthless. But the author, partly, perhaps, to save himself trouble or to swell out the volume to a respectable bulk, has thrown together pell-mell a number of testimonies from the friends and acquaintances of the invalid, and there seems no reason to suppose that these have not been printed as they were written, for the contributors of the statements in question were nearly all living when the book was published. Some of them certainly were men of standing and intelligence. For example, Professor West … delivered, in 1882, an address entitled "Fifty years of Progress."

From a copy of this brochure of 150 pages, which I have been able to consult at the British Museum, one is led to infer that the writer was a man much respected among his fellow ministers of religion, and the essay also gives proof of intelligence, wide reading, and a religious spirit.