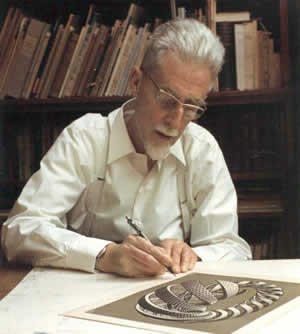 Maurits Cornelis Escher (1898 –1972) was a Dutch graphic artist. He worked primarily in the media of lithographs and woodcuts, though the few mezzotints he made are considered to be masterpieces of the technique.

Escher specialised in depicting ‘impossible realities’.  Images that naturally confuse the mind and still the reasoning system.  He did not draw from life, all the images came from his imagination.  Examples of his work include Still Life and Street, 1937, Drawing Hands, Sky and Water, Snakes, Reptiles, Gravity and Ascending and Descending.

In his graphic art, he portrayed mathematical relationships among shapes, figures and space. Additionally, he explored interlocking figures using black and white to better portray three dimensions.  He was not really interested in colour, but form, dimensions and multiple dimensions, levels and layers.  Integrated into his prints were mirror images of cones, spheres, cubes, rings and spirals.  So as you can see he was a symbolist, but not necessarily a ‘conscious’ one.

Although Escher did not have mathematical training—his understanding of mathematics was largely visual and intuitive—Escher's work had a strong mathematical component, and more than a few of the worlds which he drew are built around 'impossible' objects such as the Necker cube and the Penrose triangle.

Escher saw the world in the way Pythagoras saw the world as a mathematically based one.  He said  "Mathematicians have opened the gate leading to an extensive domain."  This domain was not physical it was spiritual.

Escher printed Metamorphosis I in 1937, which was a beginning part of a series of designs that told a story through the use of pictures. These works demonstrated a culmination of Escher's skills to incorporate mathematics into art. In Metamorphosis I, he transformed convex polygons into regular patterns in a plane to form a human motif. This effect symbolizes his change of interest from landscape and nature to regular division of a plane.

One of his most notable works is the piece Metamorphosis III, which is wide enough to cover all the walls in a room, and then loop back onto itself.

In 1941, Escher summarized his findings in a notebook, which he labeled Regelmatige vlakverdeling in asymmetrische congruente veelhoeken ("Regular division of the plane with asymmetric congruent polygons"). His intention in writing this was to aid himself in integrating mathematics into art. But this paper is considered the work of a research mathematician rather than an artist, all the more extraordinary considering his complete lack of any academic training.

Around 1956, Escher explored the concept of representing infinity on a two-dimensional plane. Discussions with Canadian mathematician H.S.M. Coxeter inspired Escher's interest in hyperbolic tessellations, which are regular tilings of the hyperbolic plane. Escher's wood engravings Circle Limit I–IV demonstrate this concept. In 1959, Coxeter stated that these works were extraordinarily accurate: "Escher got it absolutely right to the millimeter."

Where did this inspiration come from?  Escher was born in Leeuwarden, The Netherlands. He was a sickly child, with persistent skin infections and other ailments, and was placed in a special school at the age of seven. Though he excelled at drawing, his grades were generally poor. He also took carpentry and piano lessons until he was thirteen years old. He was musical, creative, mathematical and imaginative but not very intellectual – a perfect right brainer – born to be spiritual.

In 1922, an important year of his life, Escher traveled through Italy  and Spain.  In Italy, Escher met Jetta Umiker, whom he married in 1924. The couple settled down in Rome.  In 1935, the political climate in Italy became totally unacceptable to Escher who was averse to both fanaticism and hypocrisy. The family moved to Château-d'Œx, Switzerland, where they remained for two years.  In 1937, the family moved again, to Uccle, a suburb of Brussels, Belgium.

World War II forced them to move in January 1941, this time to Baarn, the Netherlands, where Escher lived until 1970. Most of Escher's better-known pictures date from this period. The sometimes cloudy, cold, wet weather of the Netherlands allowed him to focus intently on his works, and only during 1962, when he underwent surgery, was there a time when no new images were created.  A planned series of lectures in North America in 1962 was cancelled due to an illness. 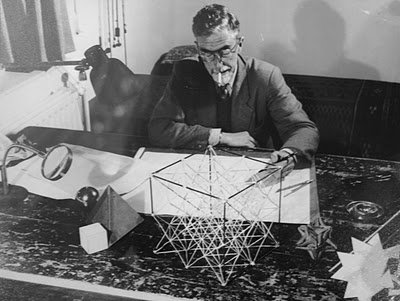 Wikipaintings has a very good selection of his work, follow this LINK.

Obviously, Wikipedia don't explain the symbolism behind each picture but by using the symbol section on this site you should be able to find what he was representing.