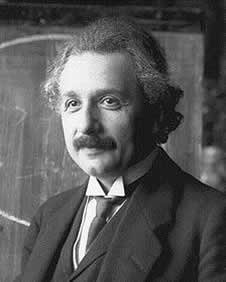 His achievements need little introduction.  Best known for his theory of relativity and specifically mass–energy equivalence, Einstein received the 1921 Nobel Prize in Physics "for his services to Theoretical Physics, and especially for his discovery of the law of the photoelectric effect”.

According to Wikipedia …..  “Einstein's many contributions to physics include:

Einstein published over 300 scientific works and over 150 non-scientific works. According to Einstein biographer Don Howard, “to the scientifically literate and the public at large, Einstein is synonymous with genius".

In this context, however, it is not the genius of Einstein or his theories alone which are of especial note, it is his spiritual and religious convictions.

Einstein was raised in a Jewish family, however, they were not observant of Jewish religious practices, and Albert attended a Catholic elementary school. Thus his religious influences were varied. Einstein was not an atheist, but his views were not conventionally religious. In 1969, for example, he wrote :

"I, at any rate, am convinced that He [God] does not throw dice."

"I believe in Spinoza's God, who reveals Himself in the lawful harmony of the world, not in a God Who concerns Himself with the fate and the doings of mankind."

In a 1950 letter to M. Berkowitz, Einstein stated that

"My position concerning God is that of an agnostic. I am convinced that a vivid consciousness of the primary importance of moral principles for the betterment and ennoblement of life does not need the idea of a law-giver, especially a law-giver who works on the basis of reward and punishment."

"I have repeatedly said that in my opinion the idea of a personal God is a childlike one. You may call me an agnostic, but I do not share the crusading spirit of the professional atheist whose fervor is mostly due to a painful act of liberation from the fetters of religious indoctrination received in youth."

He is reported to have said in a conversation with Hubertus, Prince of Löwenstein-Wertheim-Freudenberg

"In view of such harmony in the cosmos which I, with my limited human mind, am able to recognize, there are yet people who say there is no God. But what really makes me angry is that they quote me for the support of such views."

Einstein clarified his religious views in a letter he wrote in response to those who claimed that he worshipped a Judeo-Christian god:

"It was, of course, a lie .. you read about my religious convictions, a lie which is being systematically repeated. I do not believe in a personal god and I have never denied this, but have expressed it clearly. If something is in me which can be called religious, then it is the unbounded admiration for the structure of the world so far as our science can reveal it."

In his book The World as I See It, he wrote:

"A knowledge of the existence of something we cannot penetrate, of the manifestations of the profoundest reason and the most radiant beauty, which are only accessible to our reason in their most elementary forms—it is this knowledge and this emotion that constitute the truly religious attitude; in this sense, and in this alone, I am a deeply religious man." 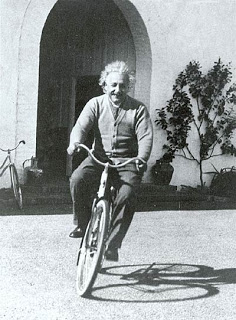 The first is motivated by fear and poor understanding of causality, and hence invents supernatural beings.

The second is social and moral, motivated by desire for love and support. Einstein noted that both have an anthropomorphic concept of God.

The third style, which Einstein deemed most mature, is motivated by a deep sense of awe and mystery. He said,

"The individual feels ... the sublimity and marvelous order which reveal themselves in nature ... and he wants to experience the universe as a single significant whole."

Einstein saw science as an antagonist of the first two styles of religion, but as a partner of the third style.

The idea of Ethical Culture

Einstein was also a Humanist and a supporter of Ethical Culture. He served on the advisory board of the First Humanist Society of New York.   For the seventy-fifth anniversary of the New York Society for Ethical Culture, he noted that the idea of Ethical Culture embodied his personal conception of what is most valuable and enduring in religious idealism. He observed,

"Without 'ethical culture' there is no salvation for humanity."

Einstein published a paper in Nature in 1940 entitled "Science and Religion" in which he said that:

"a person who is religiously enlightened appears to me to be one who has, to the best of his ability, liberated himself from the fetters of his selfish desires and is preoccupied with thoughts, feelings and aspirations to which he clings because of their super-personal value ... regardless of whether any attempt is made to unite this content with a Divine Being, for otherwise it would not be possible to count Buddha and Spinoza as religious personalities. Accordingly a religious person is devout in the sense that he has no doubt of the significance of those super-personal objects and goals which neither require nor are capable of rational foundation ... In this sense religion is the age-old endeavour of mankind to become clearly and completely conscious of these values and goals, and constantly to strengthen their effects."

He argued that conflicts between science and religion

"have all sprung from fatal errors."

"Even though the realms of religion and science in themselves are clearly marked off from each other" there are "strong reciprocal relationships and dependencies ... science without religion is lame, religion without science is blind ... a legitimate conflict between science and religion cannot exist."

"neither the rule of human nor Divine Will exists as an independent cause of natural events. To be sure, the doctrine of a personal God interfering with natural events could never be refuted ... by science, for [it] can always take refuge in those domains in which scientific knowledge has not yet been able to set foot." (Einstein 1940, pp. 605–607)

Finally, in a letter to Eric Gutkind in 1954 Einstein wrote:

I read a great deal in the last days of your book, and thank you very much for sending it to me. What especially struck me about it was this. With regard to the factual attitude to life and to the human community we have a great deal in common. ... The word God is for me nothing more than the expression and product of human weaknesses, the Bible a collection of honourable, but still primitive legends which are nevertheless pretty childish. No interpretation no matter how subtle can (for me) change this. These subtilised interpretations are highly manifold according to their nature and have almost nothing to do with the original text. For me the Jewish religion like all other religions is an incarnation of the most childish superstitions. And the Jewish people to whom I gladly belong and with whose mentality I have a deep affinity have no different quality for me than all other people. As far as my experience goes, they are also no better than other human groups, although they are protected from the worst cancers by a lack of power. Otherwise I cannot see anything 'chosen' about them. In general I find it painful that you claim a privileged position and try to defend it by two walls of pride, an external one as a man and an internal one as a Jew. As a man you claim, so to speak, a dispensation from causality otherwise accepted, as a Jew the privilege of monotheism. But a limited causality is no longer a causality at all, as our wonderful Spinoza recognized with all incision, probably as the first one. And the animistic interpretations of the religions of nature are in principle not annulled by monopolisation. With such walls we can only attain a certain self-deception, but our moral efforts are not furthered by them. On the contrary. Now that I have quite openly stated our differences in intellectual convictions it is still clear to me that we are quite close to each other in essential things, i.e. in our evaluations of human behaviour. What separates us are only intellectual 'props' and 'rationalisation' in Freud's language. Therefore I think that we would understand each other quite well if we talked about concrete things.

With friendly thanks and best wishes Yours, A. Einstein.

Oh, and as an added aside, he was left handed.

The publications which are of primary  interest from the point of view of his philosophical and spiritual views are as follows:

A list of Einstein’s scientific publications can be found at http://en.wikipedia.org/wiki/List_of_scientific_publications_by_Albert_Einstein

Other books of interest are

Further information can be found on the webpages of the Einstein Papers Project and on the Princeton University Press Einstein Page.

The most beautiful thing we can experience is the mysterious. It is the source of all true art and science.
He to whom this emotion is a stranger, who can no longer pause to wonder and stand rapt in awe, is as good as dead: his eyes are closed. . . . To know that what is impenetrable to us really exists, manifesting itself as the highest wisdom and the most radiant beauty which our dull faculties can comprehend only in their most primitive forms-this knowledge, this feeling, is at the center of true religiousness.
In this sense, and in this sense only, I belong in the ranks of devoutly religious men.
The earth and myself are of one mind. –ALBERT EINSTEIN