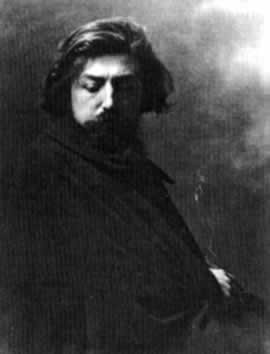 Jean Delville (1867 - 1953) was a Belgian symbolist painter, writer, and so called  ‘occultist’, meaning he had a deep interest in the spiritual.  He studied Magic, the Kabbalah and Hermeticism.  He read the works of Krishnamurti.

He also wrote a number of books himself, articles and pamphlets on spiritual subjects and the relationship to art.  ‘The New Mission of Art, a Study of Idealism in Art’ is one available in English, his others are in French.

In 1895 Delville published his Dialogue entre nous, a text in which he outlined his views on occultism and esoteric philosophy.  This is known in English as  "Dialogue among Ourselves, Cabbalistic, Occult, and Idealist Arguments" .

In some books you see him referred to as a mystic and indeed his paintings and writing seems to point to a deep understanding of the spiritual and a wish to live a spiritual life.

“The Prayer of a magician; O God of Light in whom all worlds are one, An atom from that fierce and fiery place wherein men stray, behold before Thy Face my soul, an eagle mounting to the sun. The blood-stained idols of an erring race, the clouds of evil that men's hearts have done, roll on beneath me”

In his biography, Delville’s son Olivier tells us that his father, determined to pass his ideals on to the world, was continually painting and writing. He supplemented his unreliable income by teaching art, but his busy professional life did not prevent him from applying his strongly held beliefs to his personal life. Olivier describes his father as a person of ‘courage, perseverance, probity and intellect, as well as an upright family man who was firm with his six children’.

Delville considered art had an absolutely key role in both lifting up people’s hearts to a better view of the world, but also as a form of education aid, to help them see the greater truths.  The arts in general – poetry, storytelling and painting being the home for the truths – the continuation of the myth and the parable – a means of keeping the mystic message going.  Delville looked on artists as a form of  priest or prophet:

"It is necessary to speak clearly and precisely of the civilizing mission of art... It is also necessary to speak of the moral effect which a work of art produces on people, on the public, the moralizing strength of Art, [which is] more salutary, more pacifying than that of Politics."
-- J. Delville, La Mission de l'Art, Brussels.

Though Delville frequently wrote about his ideas, he almost never discussed his paintings. And this has led to some bizarre interpretations of his work from those who are neither spiritual, nor understand symbolism.  Those with a more humble disposition simply say his paintings have “an air of mystery and intrigue”.  His paintings were based on three planes:

So he followed the thinking of just about every other mystic before and after him.  He believed in reincarnation, destiny, and the spiritual path.  He knew of the symbolism of the levels and layers, his colours reflect the Earth, Water, Air and Fire layering, and he knew of the Aether subdivisions into ‘planetary’ levels, the Intelligences and so on.

It is all the more sad that so many people don’t understand his paintings now.  Satan’s treasures for example is widely believed to be about Hell.  It isn’t, it is about Saturn [Satan is Saturn] and the realm is that of Fire, he is leading them out of the realm of fire and into the divine  - the aether level - it is an allegory of enlightenment, which is why they are all in bliss.

Delville was born in the Belgian town of Louvain in 1867. He lived most of his life in Brussels, but also spent some years in Paris, Rome, Glasgow and London. He began his training at the Académie Royale des Beaux-Arts when he was twelve, continuing there until 1889, and winning a number of top prizes. He began exhibiting professionally at the age of twenty, and later taught at the Academies of Fine Arts in Glasgow and Brussels.

In 1887 or 1888 he spent a period in Paris, where he met Sâr Joséphin Péladan, “an eccentric mystic and occultist”, who defined himself as a modern Rosicrucian, descended from the Persian Magi. [There are other artists mentioned on this website who exhibited through him] Delville was struck by a number of Péladan’s ideas, chief of which was that the ideal artist has a mission “to send light, spirituality and mysticism into the world”. He exhibited paintings in Péladan's Salons of the Rose + Croix between 1892 and 1895.

In the mid or late 1890s, Delville joined the Theosophical Society. In 1895 Delville won the Belgian Prix de Rome, and went with his family to Italy. While there, he painted The School of Plato which is now in the Museé d’Orsay in Paris.

In 1896, he founded the Salon d’Art Idealiste.  The Salon disbanded in 1898. In 1910 he became the secretary of the Theosophical movement in Belgium. In the same year he added a tower to his house in Forest, a suburb of Brussels. Delville painted the meditation room at the top, including the floorboards, entirely in blue. The Theosophical Emblem was placed at the summit of the ceiling. Though photographs and drawings still exist, the house no longer stands.  From 1907 through 1937 Delville taught at the Académie Royale des Beaux-Arts in Brussels. 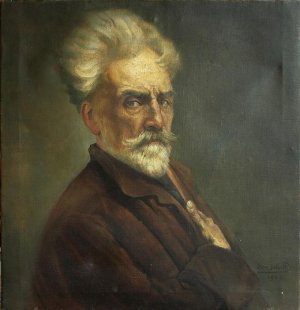 Delville had considerable success in his lifetime and his paintings were acknowledged as ‘special’.  He never compromised on his ideals. Towards the end of his life, as fashions in art changed and materialism gradually slapped its heavy hand on everything, Delville’s work was forgotten.  By 1951, Delville had become almost completely ignored. He died two years later and did not live to see the revival of interest in his work. This was marked by exhibitions in London in 1968, and Paris in 1972. Today Delville’s pictures are once again recognised as beautiful, spiritual uplifting works of art, ‘outstanding and fascinating expressions of otherworldly subjects’.

I will add a further entirely speculative thought.  Delville’s paintings show a progression spiritually, an ascent up the spiritual ladder and progress along the spiritual path.  I do not believe that it is possible to paint, write or produce poems about these stages convincingly unless one has been on this path and his paintings are entirely convincing and ‘true’ – honest.  This may well mean that over his life Delville reached the highest level of spiritual attainment  - which makes him a mystic of considerable importance.

"Understood in its metaphysical sense, Beauty is one of the manifestations of the Absolute Being. Emanating from the harmonious rays of the Divine plan, it crosses the intellectual plane to shine once again across the natural plane, where it darkens into matter."