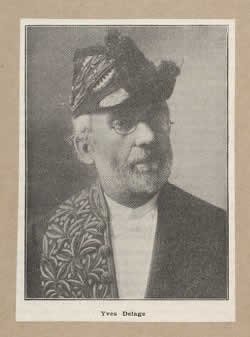 Yves Delage (1854 – 1920) was a French zoologist known for his work into invertebrate physiology and anatomy. He also discovered the function of the semicircular canals in the inner ear.

Delage was the youngest in a family of five children. He studied at Chatellerault, where he obtained a Bachelor of Science degree (1871), a degree in Natural Sciences (1878), and his doctorate of Medicine (1880), and Science (1881). He was a lecturer at the Biological Station of Roscoff, the Faculty of Sciences at the Sorbonne in Paris, the Faculty of Caen and directed the zoological station of Luc-sur-Mer. He returned to Paris in 1885, and became a lecturer at the Faculty of Science, and the following year, a professor. In 1901, he directed the Biological Station of Roscoff. He received the Darwin Medal in 1916. He was made an Officer of the Legion of Honor and received a doctorate honoris causa from the Universities of Cracow, Aberdeen and Geneva.

So what has this somewhat illustrious career as a zoologist and biologist got to do with spiritual experiences? He was a lucid dreamer.

Under the pseudonym of T. Henvic, he published poems and a number of books [now under his own name] on hypnagogic states, dreaming and methods of lucid dreaming.