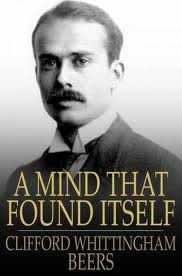 Clifford Whittingham Beers (1876 – 1943) was the founder of the ‘American mental hygiene’ movement.  He was born in New Haven, Connecticut, one of five children, all of whom would suffer from psychological distress and would die in mental institutions, including Beers himself.

In 1900 he was first confined to a private mental institution for depression and paranoia. He would later be confined to another private hospital as well as a state institution. During these periods he experienced and witnessed serious maltreatment at the hands of the staff.

After the publication of A Mind That Found Itself (1908), an autobiographical account of his hospitalization and the abuses he suffered during this process, he gained the support of the medical profession in a bid to reform the treatment of the mentally ill.

In 1909 Beers founded the "National Committee for Mental Hygiene", now named Mental Health America in order to continue the reform for the treatment of the mentally ill. He also started the Clifford Beers Clinic in New Haven in 1913, the first outpatient mental health clinic in the United States. He was a leader in the field until his retirement in 1939.

In 1968 became Honorary President of the World Federation for Mental Health.