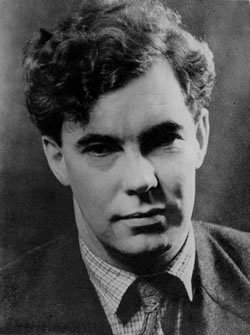 Norman Cameron (1905–1953) was a Scottish poet.  He did not write that many poems.  His poetic output amounted to about 70 poems, although he also translated works by François Villon, Balzac and Rimbaud, which needs some poetic sensibility to be effective.  After the war, he worked as a copywriter being responsible for one classic campaign, ‘Horlicks for night starvation’.

Cameron's poetry was “admired by Auden; celebrated by Dylan Thomas; valued by Robert Graves”. He was described by Martin Seymour-Smith as "one of ... The most rewarding and pure poets of his generation ..."

And indeed his poetry is wonderful, but at first sight there seems to be nothing specific about his life to provide such inspiration.  Not however until you compare individual events does it become clear that it was not one but numerous events in his life that 'opened the door' to inspiration.

Born in Bombay, Cameron was the eldest of four children of a Presbyterian Minister (Chaplain of the Bombay Presidency).  Thus we can perhaps speculate that a certain amount of spiritual thought was in his genes. 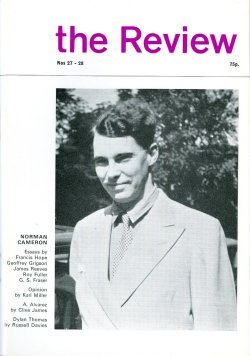 His hair parting is different in this shot, was he
right or left handed?

His father died prematurely in 1913. Subsequently, he and his siblings returned with their mother to live in Edinburgh. He was a clever boy and was admitted to his senior school two years early.  This may look good on paper, but it can be very lonely when your peers are older than you.  He went  to Oriel College, Oxford, and his first verse was published in Oxford Poetry from 1925 to 1928.

Needing money during the Great Depression, he taught briefly in Nigeria, under the auspices of that Colonial Government's Education Department. Then he spent time working and travelling in Continental Europe. While in Germany, early in Hitler's reign, he saw an incident which shocked him all his life: starving inmates of a concentration camp being tormented by local inhabitants, who were throwing bread so that it landed only just beyond the captives' reach.

During the war, he worked in London at Broadcasting House for the Political Intelligence Department. At some time, he was parachuted into Yugoslavia as a translator in dealings with Tito. He married three times, meeting his third wife, Austrian journalist Dr Gretl Bajardi, when he worked for the British Delegation of the Allied Commission for Austria, in Vienna.

A fire broke out in the couple's flat in Queens Gate, South Kensington, in 1951; and though all his own writings were saved from the flames, his life's collection of considerable works of reference in art and literature was completely destroyed. He told his younger brother Angus that he was distraught, that the loss 'was like losing his own soul '.

So as we can see there is a sort of pattern of a succession of emotional traumas, shocking and memorable events – war, broken relationships, loneliness, the loss of your father, financial hardship, the loss of treasured possessions.  Psychological trauma.  Continual emotional pain.

Cameron, whom Dylan Thomas said he regarded as his best friend, died in London of a brain haemorrhage, only six months before Thomas's own demise.