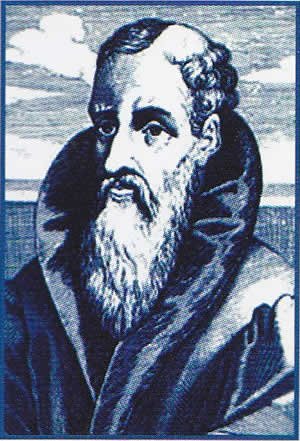 Anicius Manlius Severinus Boëthius (ca. 480–524 or 525) was a Christian philosopher of the 6th century.  He was born in Rome to an ancient and important family which included emperors Petronius Maximus and Olybrius and many consuls.  His father, Flavius Manlius Boethius, was consul in 487 after Odoacer deposed the last Western Roman Emperor. Boethius himself was consul in 510 in the kingdom of the Ostrogoths. In 522 he saw his two sons become consuls.  So he was essentially – initially at least – a politician not a philosopher.

But just when Boethius was at the very height of power in Rome he was brought down 'by treachery'. He was accused of and imprisoned for the crime of treason by Ostrogothic King Theodoric the Great.  Boethius's only work of philosophy -  the Consolation of Philosophy -  was written during Boethius' one year imprisonment while awaiting trial, and eventual horrific execution in 525 AD.

So whatever inspiration and wisdom can be found in the book is there from a mixture of loss of independence , overwhelming fear, as well as humiliation, [and this latter figures very very prominently] a rather potent combination producing high emotion very evident in the book. 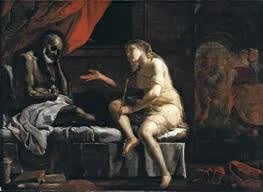 Boëthius with his guide

In order to appreciate the arguments one has to place them within the context of Boethius's Christian belief in a sort of personal God who also should be on the side of 'good' and against 'bad'.  For me the text made interesting reading, not only because it is well written, with poems and allegorical additions as well as the philosophical thoughts, but because he ultimately disproves his own beliefs.

He agonised about  how it was possible that evil could exist in a world “governed by God”,  a view very characteristic of those who assume or are taught to believe that morals are from God and not man made.  He was also forced to face “fickle fortune”, while also considering the nature of happiness. It is clear that he equates happiness initially with wealth, fame, power, status and all the other things he has lost.  Argument after argument simply serves to demolish the beliefs he had.  It has been described as "by far the most interesting example of prison literature the world has ever seen."

Boethius writes the book as a conversation between himself and Lady Philosophy. She consoles Boethius by discussing the transitory nature of fame and the ultimate superiority of things of the mind, which she calls the "one true good". She contends that happiness comes from within.  She seems at times a personification of his Higher spirit.

Boethius considers questions such as the nature of predestination, “why evil men often prosper and good men fall into ruin”, human nature, virtue, and justice. He  asks if God knows and sees all, or does man have free will. Again all this presupposes a personal God.  For me it simply highlighted the weaknesses of all these beliefs.

Boethius sought to answer religious questions without reference to Christianity, relying solely on  philosophy in the Classical Greek tradition. So he comes from a Christian viewpoint but uses philosophical discussion, as such the results are fascinating.

His death was not at all nice as he had predicted

'The method of Boethius' execution varies in the sources; he was perhaps killed with an axe or a sword, or was clubbed to death. According to another version a rope was attached round his head and tightened till his eyes bulged out, then his skull was cracked.'