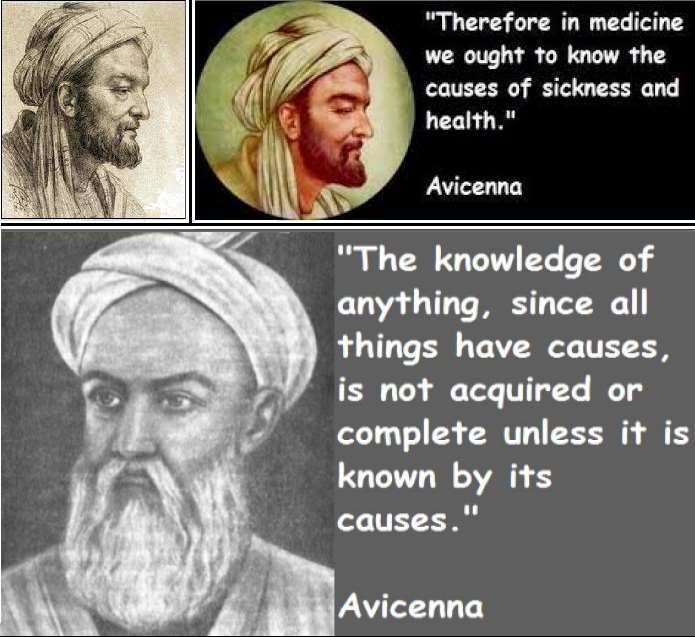 Avicenna, Arabic Ibn Sīnā, in full Abū ʿAlī al-Ḥusayn ibn ʿAbd Allāh ibn Sīnā  (born 980, near Bukhara, Iran [now in Uzbekistan]—died 1037, Hamadan, Iran), was a Persian physician and one of the most famous and influential philosopher-scientists of the Islamic world. He was particularly noted for his contributions in the fields of philosophy and medicine.   Despite the vast range of his work, he is best known for two books, both of which are on healing and both of which remained influential well after his death.

The Kitāb al-shifāʾ (Book of the Cure or Book of Healing) is a vast philosophical and scientific encyclopaedia, and Al-Qanun fi al-Tibb (The Canon of Medicine), is among the most famous books in the history of medicine.  Lecturing in 1913, Canadian physician and professor of medicine Sir William Osler described Avicenna as “the author of the most famous medical text-book ever written.” Osler added that, as a practitioner, Avicenna was “the prototype of the successful physician who was at the same time statesman, teacher, philosopher and literary man.”

The Canon of Medicine (Al-Qanun fi al-Tibb) is divided into five books. The first book contains four treatises, the first of which examines the four elements (Earth, Air, Fire, and Water) but also includes anatomy.   In effect, it is based on spiritual concepts, it is thus true healing.

Avicenna believed in cause based medicine.  The second treatise examines etiology, which is the word used to mean the study of the cause of an illness, working back from the symptoms.  The third treatise covers hygiene, health and sickness, and death’s inevitability. The fourth treatise is a classification of disease and also covers regimens and dietary treatments. Book II of the Canon is a “Materia Medica,” Book III covers “Head-to-Toe Diseases,” Book IV examines “Diseases That Are Not Specific to Certain Organs” (fevers and other systemic and humoral pathologies), and Book V presents “Compound Drugs”.

If we look at this compendium it represents everything that medicine ought to be.  Cause and not symptom based, with healing treatments based on a mixture of food, plant based medicines and ‘regimens’ things like exercise, or heat treatment which were aimed to cure the illness.  Avicenna used ‘reduction techniques’, for example, to treat spinal deformities. Reduction involved the use of pressure and traction to straighten or otherwise correct bone and joint deformities such as curvature of the spine. Today we might call this osteopathy or chiropractise.  The techniques were not used again until French surgeon Jean-François Calot reintroduced the practice in 1896. In other words, 1000 years ago medicine was in a far better shape than it is now.

The Kitab al-Shifa' (The Book of Healing) includes not only healing information but parts devoted to mathematics, astronomy and music as branches of mathematics within the encyclopaedia. In fact he divided mathematics into four branches, geometry, astronomy, arithmetic, and music.  We should take note of this division, as it too is a spiritual view of the world - a view which aligns with that of Pythagoras for example.

Avicenna began his prodigious writing career at age 21.  He wrote almost 450 works on a wide range of subjects, of which around 240 have survived. His other works include books and treatises on astronomy, alchemy, geology, psychology, Islamic theology, logic, mathematics, physics, music as well as poetry.  In particular, 150 of his surviving works concentrate on philosophy and 40 of them concentrate on medicine.  In Avicenna’s correspondence with al-Biruni, he covers topics such as philosophy, astronomy and physics, but he also includes arguments against theologians and those professing magical powers.
“As a consequence ibn Sina is seen  as promoting natural science and arguing against religious men who attempt to obscure the truth”.

One of the reasons that the time of his writing is regarded as the ‘Islamic Golden Age’, is that no artificial separation of disciplines existed.  One could use alchemy, for example, to gain spiritual experience, which was subsequently interpreted philosophically or used to heal, for example, or write poetry, or compose music or invent or establish new mathematical principles.  Avicenna was particularly interested in symbolism and used oneiromancy, the art of dream interpretation.

Ibn Sina sought to integrate all aspects of science and religion in a grand metaphysical vision. With this vision he attempted to explain the formation of the universe as well as to elucidate the problems of evil, prayer, providence, prophecies, miracles, and marvels. Also within its scope fall problems relating to the organisation of the state in accord with religious law and the question of the ultimate destiny of man [A Z Iskandar].

Avicenna’s cosmology was thus obtained principally by ‘revelation’ and defined ‘God’ as the Ultimate Intelligence—the First Cause—from whom emanated 10 Intelligences. There was then a breakdown of functionality within an Intelligence hierarchy to what Avicenna called the Active Intelligence, in effect the Intelligence from which [in this case] humans derived and which communicated to humans through its divine Light.

The course of Avicenna's life was dominated by the period of great political instability through which he lived. The Samanid dynasty, the first native dynasty to arise in Iran after the Muslim Arab conquest, controlled Transoxania and Khorasan from about 900. Bukhara was their capital and it, together with Samarkand, were the cultural centres of the empire. However, from the middle of the 10th century, the power of the Samanid's began to weaken. By the time Avicenna was born, Nuh ibn Mansur was the Sultan in Bukhara but he was struggling to retain control of the empire.

Avicenna's father was the governor of a village in one of Nuh ibn Mansur's estates. He was educated by his father, whose home was a meeting place for men of learning in the area. Certainly, Avicenna was a remarkable child, with a memory and an ability to learn which amazed the scholars who met in his father's home. By the age of ten he had memorised the Qur'an and most of the Arabic poetry which he had read. When he reached the age of thirteen he began to study medicine and he had mastered that subject by the age of sixteen when he began to treat patients. He also studied logic and metaphysics, receiving instruction from some of the best teachers of his day, but in all areas he continued his studies on his own. In his autobiography, Avicenna stresses that he was more or less self-taught, but that at crucial times in his life he received help.

It was his skill in medicine that was to prove of great value to him, for it was through his reputation in that area that the Samanid ruler Nuh ibn Mansur came to hear of him. After Avicenna had cured the Samanid ruler of an illness, as a reward, he was allowed to use the Royal Library of the Samanids which proved important for his development in the whole range of scholarship. 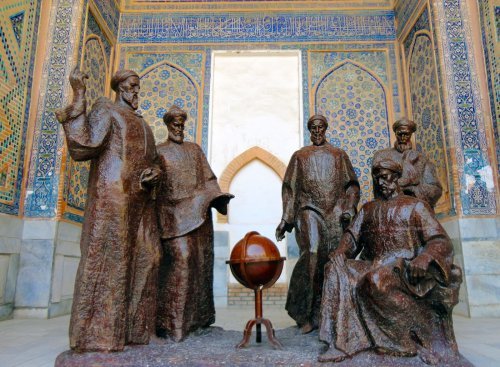 If the fortunes of the Samanid rulers had taken a turn for the better, Avicenna's life would have been very different. Nuh ibn Mansur, in an attempt to keep in power, had put Sebüktigin, a former Turkish slave, as the ruler of Ghazna and appointed his son Mahmud as governor of Khorasan. However the Turkish Qarakhanids, already in control of most of Transoxania, joined with Mahmud and moved to depose the Samanids. After gaining Khorasan they took Bukhara in 999. There followed a period of five years in which the Samanids tried to regain control but their period of power was over.

The defeat of the Samanids and another traumatic event, the death of his father, changed Avicenna's life completely. Without the support of a patron or his father, he began a life of wandering round different towns of Khorasan, acting as a physician and administrator by day, while every evening he gathered students round him for philosophical and scientific discussion. He served as a jurist in Gurganj, was in Khwarazm, then was a teacher in Gurgan and next an administrator in Rayy. Perhaps most remarkable, is the fact that he continued to produce top quality scholarship despite his chaotic and insecure life style.

After this period of wandering, Avicenna went to Hamadan in west-central Iran. Here he settled for a while becoming court physician. The ruling Buyid prince, Shams ad-Dawlah, twice appointed him vizier. Politics was not easy at that time and Avicenna was forced into hiding for a while by his political opponents.  He also spent some time as a political prisoner in prison.  The Book of Healing and The Canon of Medicine were begun while he was in Hamadan.

Avicenna left Hamadan in 1022, on the death of the Buyid prince who he was serving, and he travelled to Isfahan. Here he entered the court of the local prince and spent the last years of his life in comparative peace. At Isfahan he completed his major works begun at Hamadan and also wrote many other works on philosophy, medicine and the Arabic language.  For example, he completed Kitāb al-shifāʾ, wrote Dānish nāma-i ʿalāʾī (Book of Knowledge) and Kitāb al-najāt (Book of Salvation), and compiled new and more accurate astronomical tables.

While in the company of ʿAlā al-Dawla, Avicenna fell ill with colic. He treated himself, however the treatment did not work.  He then turned to mithridate (a mild opium remedy), but received an overdose. “Weakened but indefatigable”, he accompanied ʿAlā al-Dawla on his march to Hamadan. On the way he took a severe turn for the worse, lingered for a while, and died.

We know many details of his life, for he wrote an autobiography which has been supplemented with material from a biography written by one of his students - his long time pupil al-Jūzjānī. The autobiography is not simply an account of his life, but rather it is written to illustrate his ideas of reaching the ‘ultimate truth’.

A critical edition of this autobiography appears in W E Gohlman (ed. and trans.), The life of Ibn Sina (New York, 1974). while a new translation can be found, for example, in D Gutas, Avicenna and the Aristotelian tradition (Leiden, 1988).