Avicenna - Henry Corbin on the cosmology of Avicenna 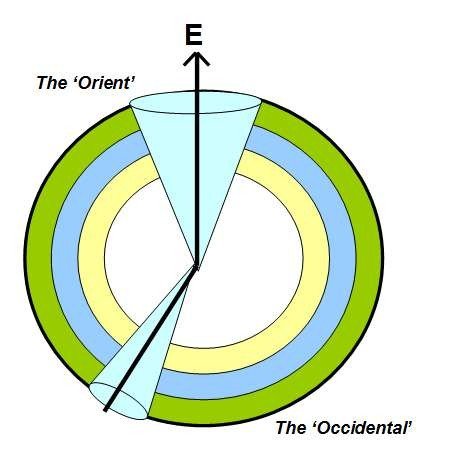 Here we find our direction in a brief reference to the schema of the world that takes definite shape in Avicenna's cosmology. This schema divides the totality of thinkable being into a cosmic Occident and a cosmic Orient. We have already recalled precisely that this cosmic Orient is not to be sought in the East on our maps, but in the "polar dimension." In fact this Orient is the celestial pole, the "centre" of all conceivable orientation. It is to be sought in the direction of the cosmic North, that of the "Earth of Light".

The "Occident" represents the sensory material world , and it is twofold: there is the "climate" of sublunar terrestrial matter, that of our material Earth, subject to generation and dissolution; and there is the "climate" of the celestial matter, that of the Spheres, consisting of an etheric substance, diaphanous and incorruptible, but still , however, deriving from the physical. The "Orient" begins from the climate of the soul: at the celestial Pole , at the emerald rock. This spiritual sun rises for the pilgrim and this dawn reveals to him the perspective of an entirely new universe, wherein are ranked successively the souls summoned to govern human bodies for a time; then the Souls whose mission it is to communicate the movement of their desire and their love to the celestial Spheres, and who are called celestial Angels (Angeli coelestes); finally, the Intelligences, who are respectively , the objects of this love and what are designated spiritual Angels or Cherubim (Angeli intellectuales). The characteristic that distinguishes Avicenna's cosmology from that of Averroes is precisely that the former includes in its structure this world of celestial Souls, in whose image the human soul is constituted, but which, unlike it, do not

possess the organs of sensory knowledge. On the other hand, they are endowed with active Imagination. They even possess it in so pure and perfect a degree that their Imagination, independent, unlike ours, of sensory date, is entirely true and never weakened. Therefore, the representations that the Angels of celestial Souls may make of their universe corresponds to the situation of the human soul when its active Imagination, purified and trained, has become the imganatio vera, its organ of meditation.

It is a mixed world, mediating between ………. the "near Orient," which is the human soul rising to consciousness of itself, and the spiritual "far Orient" constituted by the pleroma of cherubic Intelligences.