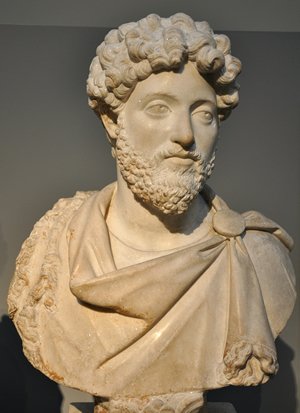 Marcus Aurelius (Latin: Marcus Aurelius Antoninus Augustus; 121 AD –  180 AD), was Roman Emperor from 161 to 180. He ruled with Lucius Verus as co-emperor from 161 until Verus' death in 169. He was the last of the ‘Five Good Emperors’, and is also considered one of the most important Stoic philosophers.  He needed to be stoic too, as we shall see.

Marcus Aurelius had greatness thrust upon him.  His preference was the study of philosophy, but from a very early age he was groomed for power.  His love of philosophy was probably obtained from Apollonius of Chalcedon, a Stoic philosopher. He is one of only three people Marcus thanks the gods for having met.   Marcus would constantly struggle to reconcile the life he was forced to live with his philosophic yearnings. He told himself it was an attainable goal—"where life is possible, then it is possible to live the right life; life is possible in a palace, so it is possible to live the right life in a palace". 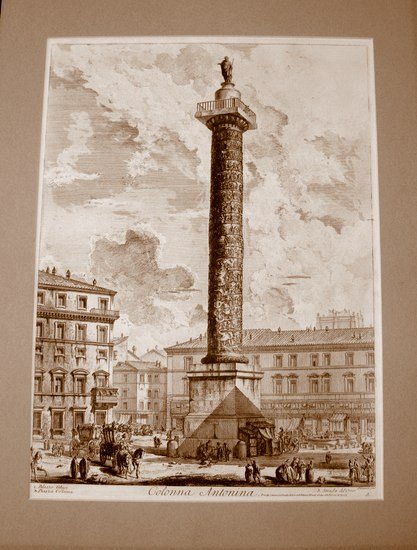 After his father's death, Aurelius was adopted by his paternal grandfather Marcus Annius Verus (II) and schooled in all the subjects needed to go into law and politics.  In 127, at the age of six, he was enrolled in the equestrian order on the recommendation of Emperor Hadrian.  He rose through the offices of the priesthood, becoming in turn the leader of the dance, the vates (prophet), and the master of the order.

Immediately after Emperor Hadrian's death, Antoninus took over and arranged that Marcus would be betrothed to Faustina, Antoninus' daughter.  He was made consul, and at the senate's request, joined all the priestly colleges.   After taking the toga virilis in 136, Marcus began his training in oratory.  He was being "fitted for ruling the state", in the words of his biographer.

By the age of twenty-five, Marcus had grown disaffected with his studies in jurisprudence, and showed some signs of general malaise.  It "affected his health adversely", his biographer writes, to have devoted so much effort to his studies.   In December 147, Antoninus Pius gave Marcus the tribunician power and the imperium—authority over the armies and provinces of the emperor. 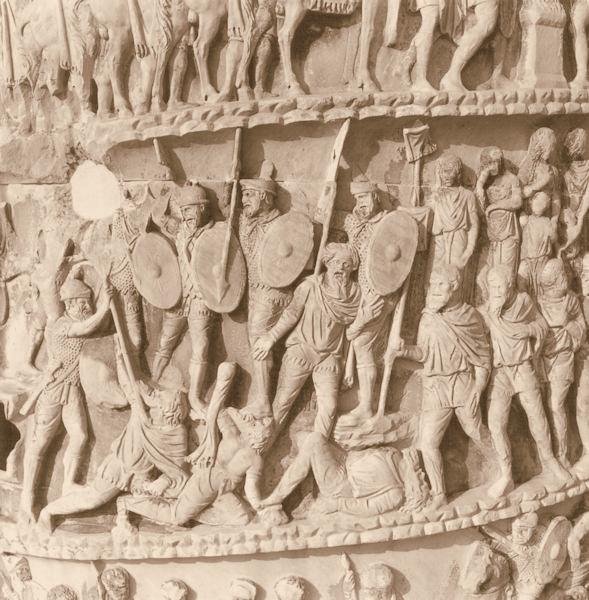 In 156, Antoninus Pius turned 70. On 7 March 161, he summoned the imperial council, and passed the state and his daughter to Marcus. He ordered that the golden statue of Fortune, which had been in the bedroom of the emperors, should go to Marcus' bedroom. Antoninus turned over, as if going to sleep, and died.  After the death of Antoninus Pius, Marcus was effectively sole ruler of the Empire. The formalities of the position would follow:  Marcus, with his preference for the philosophic life, found the whole idea appalling. His training as a Stoic, however, had made the choice clear. It was his duty.

And that was his life until he died.  Duty.

His main mentor and friend throughout his life was a man called Fronto.  Aurelius grew to love Fronto – possibly as a substitute father.  He sent  Fronto a letter on his birthday, telling him he loved him and calling on the gods to improve his mentor's health. When Marcus took a four-day public holiday at Alsium, a resort town on the Etrurian coast, he wrote to Fronto, telling him that he would not speak about his holiday. Fronto replied ironically: "What? Do I not know that you went to Alsium with the intention of devoting yourself to games, joking and complete leisure for four whole days?" He encouraged Marcus to rest, calling on the example of his predecessors (Antoninus had enjoyed exercise in the palaestra, fishing, and comedy).  Marcus had apparently been spending most of his evenings on judicial matters instead of at leisure."I have duties hanging over me that can hardly be begged off," he wrote back. 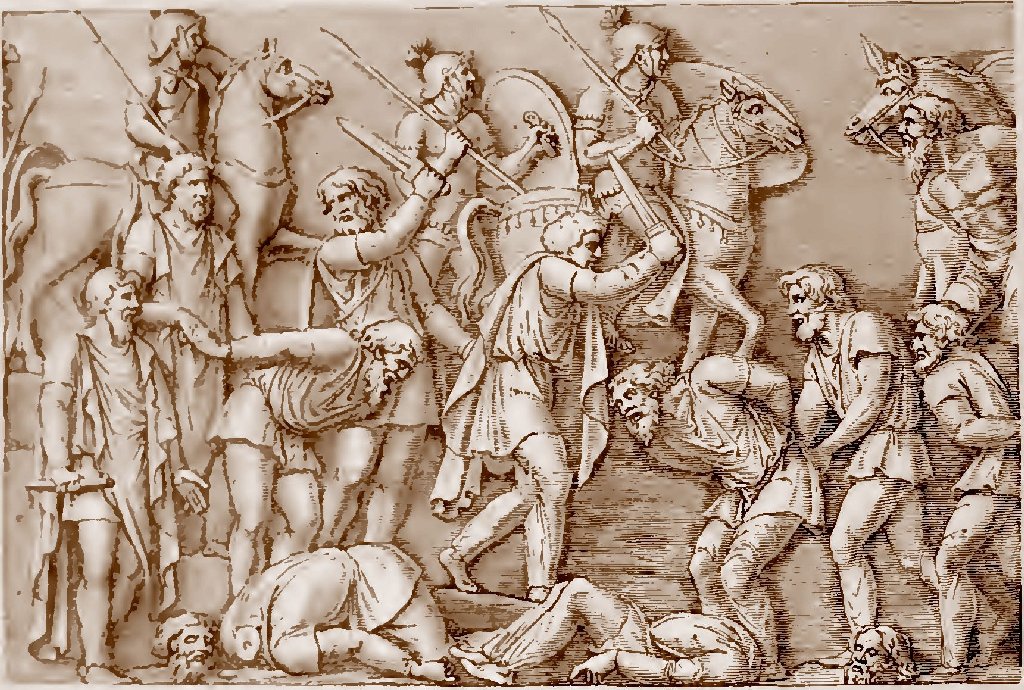 Perhaps, you might say, his family were able to help.  On 30 November 147, Faustina gave birth to a girl, named Domitia Faustina. She was the first of at least fourteen children (including two sets of twins) that Faustina would bear over the next twenty-three years.  Domitia died in 151.  In 149, Faustina gave birth again, to twin sons. They did not survive long.  During their 30-year marriage, Faustina bore 14 children. Only one son and four daughters outlived their father.  Marcus steadied himself: "One man prays: 'How I may not lose my little child', but you must pray: 'How I may not be afraid to lose him'.

Maybe you may be saying, his father or mother helped him.   At some time around 155 [aged 34], Marcus' mother, Domitia Lucilla, died. Marcus's father died when he was young and he was raised by his mother Lucilla.  In his letters, Marcus makes frequent and affectionate reference to her; he was grateful that, "although she was fated to die young, yet she spent her last years with me".

Perhaps you might say, his reign was relatively trouble free.  Marcus' early reign proceeded relatively smoothly, but in the spring of 162, the Tiber flooded over its banks, destroying much of Rome. It drowned many animals, leaving the city in famine. Marcus and Lucius gave the crisis their personal attention. 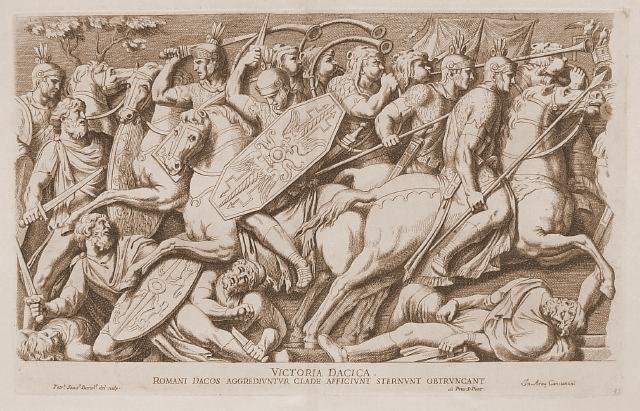 The empire was threatened by war on practically every front - Britain, Raetia and Upper Germany; a rebellion was brewing in Syria, there were problems in Armenia.  Marcus was unprepared. Antoninus seems to have given him no military experience or training.  Nevertheless, during his reign, the Empire defeated a revitalized Parthian Empire in the East; Aurelius' general Avidius Cassius sacked the capital Ctesiphon in 164. In central Europe, Aurelius fought the Marcomanni, Quadi, and Sarmatians with success during the Marcomannic Wars. A revolt in the East led by Avidius Cassius failed to gain momentum and was suppressed immediately.

The returning armies carried with them a plague, afterwards known as the Antonine Plague, or the Plague of Galen, which spread through the Roman Empire between 165 and 180. The disease was a pandemic believed to be either of smallpox or measles, and claimed the life of Lucius Verus, who died in 169.  Total deaths have been estimated at five million.  Aurelius soldiered on alone.

Perhaps, you may say, the poor man had at least been blessed with good health to help him face all these ordeals.  Well no.   "As far as my strength is concerned, I am beginning to get it back; and there is no trace of the pain in my chest. But that ulcer ....I am having treatment and taking care not to do anything that interferes with it."  Marcus was neither healthy or strong. The Roman historian Cassius Dio, writing of his later years, praised him for behaving dutifully in spite of his various illnesses.

Here it may be worth mentioning that Marcus Aurelius took for his pain, his grief, his anxiety and his troubled mind, a heady brew called Theriac.  Theriac contains opium.  Not much, but it still contains opium.  It may also have included cannabis.  But Aurelius cannot have been an addict, because he handled the affairs of state throughout his life with extraordinary skill. 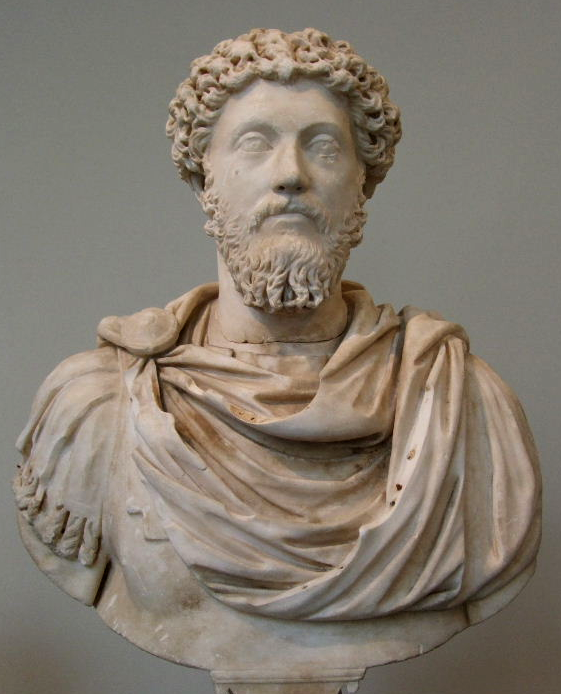 Both Marcus and Lucius proved popular with the people of Rome, who strongly approved of their civiliter ("lacking pomp") behavior. The emperors permitted free speech, evidenced by the fact that the comedy writer Marullus was able to criticize them without suffering retribution. At any other time, under any other emperor, he would have been executed. But it was a peaceful time, a forgiving time.

Like many emperors, Marcus spent most of his time addressing matters of law such as petitions and hearing disputes. Marcus took great care in the theory and practice of legislation. Professional jurists called him "an emperor most skilled in the law" and "a most prudent and conscientiously just emperor". He shows marked interest in three areas of the law: the manumission of slaves, the guardianship of orphans and minors, and the choice of city councillors (decuriones).

Despite his illnesses, and together with his wife Faustina, Marcus Aurelius toured the eastern provinces until 173. He visited Athens, declaring himself a protector of philosophy. After a triumph in Rome, the following year he marched again to the Danubian frontier. After a decisive victory in 178, the plan to annex Bohemia seemed poised for success but was abandoned after Marcus Aurelius fell ill in 180.  Marcus Aurelius died on 17 March 180, in the city of Vindobona (modern Vienna).

...[Marcus] did not meet with the good fortune that he deserved, for he was not strong in body and was involved in a multitude of troubles throughout practically his entire reign. But for my part, I admire him all the more for this very reason, that amid unusual and extraordinary difficulties he both survived himself and preserved the empire. – Cassius Dio 71.36.3–4[262] 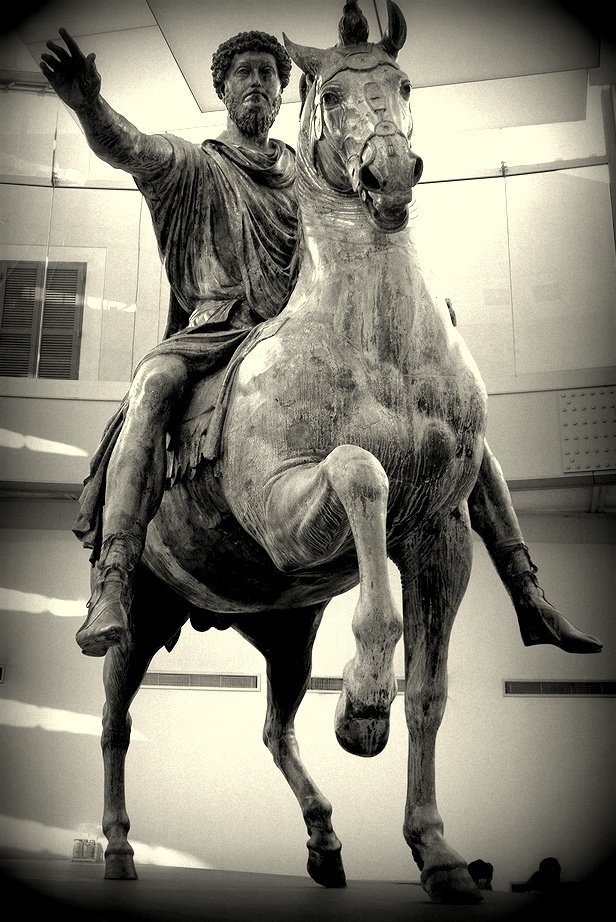 Marcus Aurelius' wrote Meditations, written in Greek while on campaign between 170 and 180, it was intended to be a sort of handy reference guide for himself and was only given its title later.  The work is both philosophical and spiritual and is still revered as a literary monument to a philosophy of service and duty, describing how to find and preserve equanimity in the midst of terrible adversity and setbacks.

He had no inspiration but his own character, but I do think that this is one example where the use of opium  - in the form of Theriac - probably saved the man.  He was intelligent, in a position of great power and as we know power can corrupt, he was ill from stress and grief stricken.  But he was of sufficient strength of character to be able to use Theriac and the tiny tiny quantities of opium it contained  to gain access to higher strengths and wisdom, to help him gain access to his Higher spirit and the stoicism he needed.

Ultimately however, opium was not the mechanism by which he gained wisdom and stoicism, opium simply acted in the same way warm slippers and a glass of red wine do at the end of a hard day.  Nor was it the means by which he was able to rule an empire – it was because he Squashed the big I am.  And this is where all the observations I found to be helpful in the context of spiritual development have been placed.

"Alone of the emperors," wrote the historian Herodian, "he gave proof of his learning not by mere words or knowledge of philosophical doctrines but by his blameless character and temperate way of life."

All the plates on this page are of scenes on the Column of Marcus Aurelius in Rome.  The column is shown on this page and is from a print by Piranesi