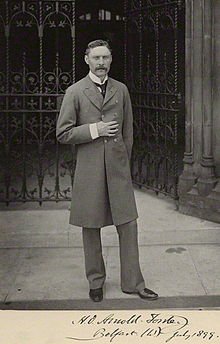 Mary Arnold-Forster was the wife of Hugh Oakeley Arnold-Forster known as H. O. Arnold-Forster, who was a British politician and writer. He notably served as Secretary of State for War from 1903 to 1905. Very little is ever written about poor Mary as she is generally eclipsed by the exploits of her husband. She was born Mary Lucy Story-Maskelyne and lived from (1861–1951). And her main claim to fame is that she wrote a very easy to read book on dreams and dreaming.

Even though it is probably the oldest book on dreams still in print, it is one of the more enjoyable and helpful.

The very fact that it was written before psychologists came on the scene, and before dream interpretation became a sort of pseudoscience, is why it is so good. It is a completely original and personal account of the author's experiences, observations, and theories. It doesn't have the impersonal scientific feel that many of the more modern books do. And I tend to agree with Mrs Arnold-Forster in many of the arguments she puts forward. 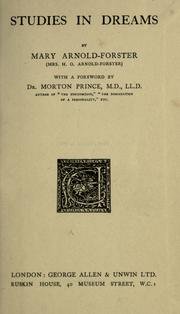 The author of the book modestly makes no claim to be a scientific explorer but only to be a recorder of her own dream experiences, who has been impelled to stray a little beyond the province assigned and to attempt some partial explanation of the riddles that are met with. But the reader, I am sure, will find that she has scarcely done herself justice in this diffident attitude, for the accurate recording of observations is the basis of science and requires the development and possession of no common talent.

Such observations are of much more scientific value than a number of inadequate theories, inadequate because based upon only a selected or limited group of facts.

Moreover, these pages are rich in sound comments and discussions of the recorded phenomena, which are suggestive of new problems and points of view, and the author offers us particularly a well-considered new theory of the mechanism of dreams. A considerable number of the observations recorded must be regarded as additions to our knowledge and as new data for an adequate interpretation of the mechanism of dreams.