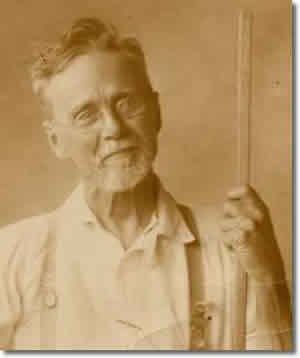 Andrew Taylor Still, M.D., D.O. (1828 –1917) is the founder of osteopathy and osteopathic medicine. He was also a physician & surgeon, author, and Kansas territorial & state legislator.

Still was active in the abolition movement and was a prolific inventor.  In the 1870s, he patented an improved butter churn.   He made improvements to a mowing machine designed to harvest wheat and hay. In 1910, he patented a smokeless furnace burner,  but had “some difficulty producing a full-sized working model”.

He was also one of the founders of Baker University, the oldest 4-year college in the state of Kansas, and was the founder of the American School of Osteopathy (now A.T. Still University), the world's first osteopathic medical school, in Kirksville, Missouri.

Still was born in Lee County, Virginia, in 1828, the son of a Methodist minister and physician. At an early age, Still decided to follow in his father's footsteps as a physician.

His life was filled with tragedy.  Three of his children died from spinal meningitis in 1864.   His wife, Mary Elvira died in May 1910 which left him heart broken, so he was perhaps driven by Grief, although he clearly had a hereditary predisposition to be ‘inspired’.

The combination of his experiences of medical standards in the Civil War and the death of his children, led him to the conclusion that orthodox medical practices of his day were frequently ineffective and sometimes harmful. He devoted the next thirty years of his life to studying the human body and finding alternative ways to treat disease.

He noticed that many medical practises of the day often caused significant harm, did not address the underlying cause of illness – symptoms were treated and not causes -  and that many of the medicines/pharmaceuticals given were harmful to the patient – ‘medicines’ commonly given to patients during this time were arsenic, castor oil, whiskey, and opium.

His aim was to treat illness at its root cause, to use very gentle stimulation via trigger points as the key healing device and that surgery and pharmaceuticals would only be used as the treatment of last resort.  The name "osteopathy" combines  two Greek roots osteon- for bone and-pathos for suffering.  Still was also one of the first physicians to promote the idea of preventive medicine.

In a 1907 interview by the Topeka Daily Capital newspaper, A.T. Still's son, Charles Still, D.O., said that his father's belief was that the body would operate smoothly into old age if properly maintained, and that every living organism possessed the ability to produce all the necessary chemicals and materials to cure itself of ailments.

Andrew Taylor Still was the founder of osteopathy.  He went to medical school and then into the army, where he rose to the rank of major and became an army surgeon.  He came to believe that a person should be treated as a whole, that patients cannot get sick in one area of the body without the involvement of other parts.  Still developed the art of manipulative therapy based on his detailed knowledge of human anatomy, physiology and the newly found interrelationship between the body and its function.

He found that by carefully palpating a patient’s soft tissues, he could ascertain organic imbalance and that by gently manipulating visceral and soft tissue, he could achieve startling results.

Still lived to be 89 years old and left a legacy of over 11,000 osteopathic practitioners in the United States and Europe.  He is still remembered today for his simple yet far reaching statement: