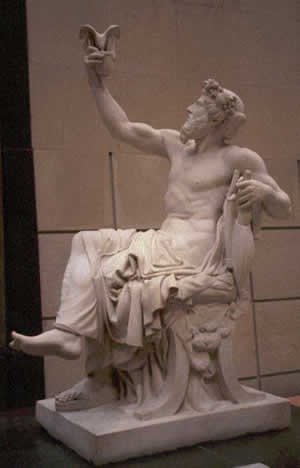 Anacreon (582 BC – 485 BC) was a Greek lyric poet, whose poetry dwelt on the ‘universal themes of love, infatuation, disappointment, revelry, parties, festivals, and the observations of everyday people and life’. It is, in other words, a joyful celebration of life and love.

Tragically, very little of his poetry survives.  Of the five books of lyrical pieces by Anacreon which the Suda and Athenaeus mention as extant in their time, we have now 'but the merest fragments', collected from the citations of later writers.

Anacreon was a follower of Dionysos and wrote so called ‘bacchanalian hymns’. Two short hymns to Artemis and Dionysos, consisting of eight and eleven lines respectively, are amongst the few undisputed remains. But other ‘hymns’ to Aphrodite and Eros also exist and are probably his.

Anacreon wrote all of his poetry in the ancient Ionic dialect and it was meant to be sung or recited to the accompaniment of music, usually the lyre, by one person.
“In keeping with Greek poetic tradition, his poetry relied on meter for its construction. Metrical poetry is a particularly rhythmic form, deriving its structure from patterns of phonetic features within and between the lines of verse. The phonetic patterning in Anacreon's poetry, like all the Greek poetry of the day, is found in the structured alternation of "long" and "short" vowel sounds. The Ionic dialect also had a tonal aspect to it that lends a natural melodic quality to the recitation”
Inevitably, therefore, the real beauty of his work tends to get lost in translation, but there have been some creditable attempts to at least try to match the style.

In the rather dry judgemental voice so beloved of academics,  he has often been criticised for ‘the  tone of his lyric effusions leading to a detrimental assessment of his character and his triple worship of the Muses, Wine and Love’.  He sounds both wonderful fun and someone I’d have longed to meet.  Athenaeus once remarked that ‘he seems at least to have been sober when he wrote’. His statue on the Acropolis of Athens depicts him, according to his critics, as ‘drunk’.  Of course he could have just been in ecstasy but his critics would never have known.

Anacreon had a lot of imitators, although none seemed to use the same Ionic dialect as he did.  A collection of poems by numerous anonymous imitators was long believed to be the works of Anacreon himself. Known as the Anacreontea, it was preserved in a 10th-century manuscript, little is known about the origins of the manuscript. The Pope had a copy and Napoleon.  In the 17th century, Thomas Stanley translated the Anacreontea into English verse.