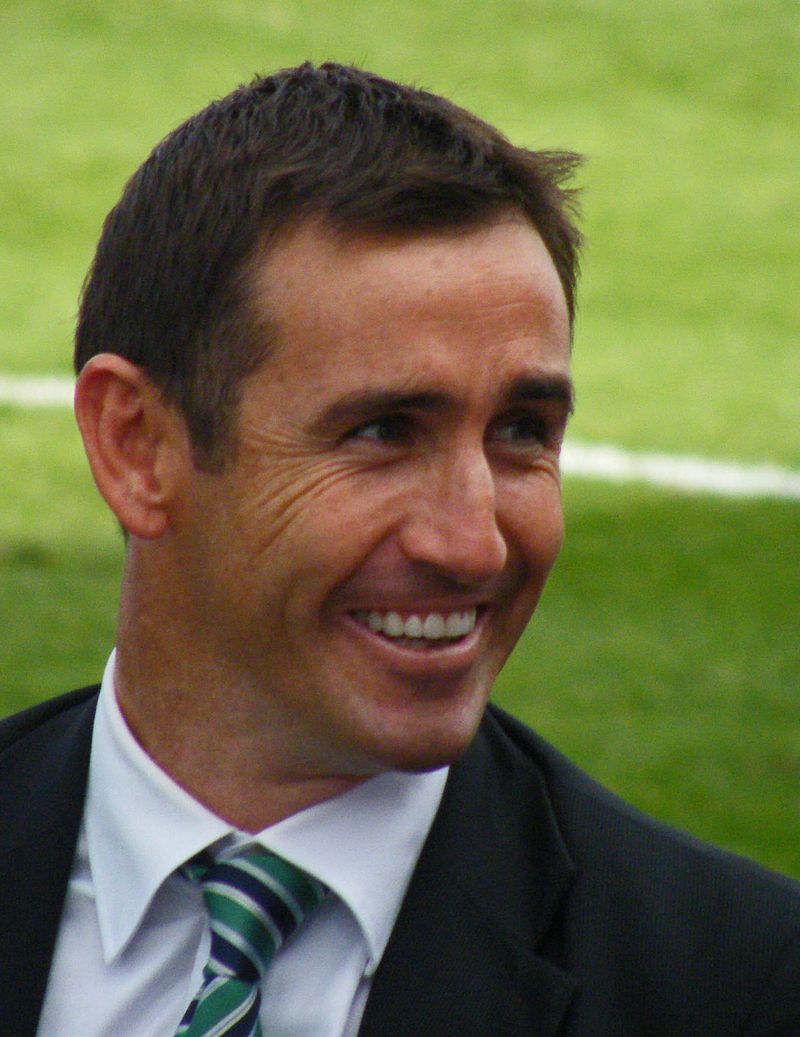 Andrew Gary "Joey" Johns (born 19 May 1974) is a former Australian professional rugby league footballer.   Johns announced his retirement from rugby league on 10 April 2007 at the age of 32.  After retiring Andrew became a commentator for Channel 9 and Monday Night Football on Triple M radio and also worked in a coaching role.

Johns was the center of controversy in 2004 after rugby union attempted to lure him from league. He was also approached by the Welsh Rugby Union because of his Welsh heritage, but Johns finally decided to stay in league. He said his decision was greatly affected by his son, who wanted him to stay in rugby league.

Born in Cessnock, New South Wales, Australia, he was at the time of his retirement a 5 ft 10 in, 14 st, Halfback, Hooker.  He was hailed as the best halfback in the world for many years, captained the Newcastle Knights in the National Rugby League and participated in the team's only two premiership victories in 1997 and 2001, playing a club record 249 games for the Knights.

Johns also represented his country at two World Cups, and on one Kangaroo tour, playing in total 21 Test matches for the national side. He played in 23 State of Origin series matches for the New South Wales Blues (captaining the side to a series win in 2003), and played for the Country Origin side in 1995 and 2003. 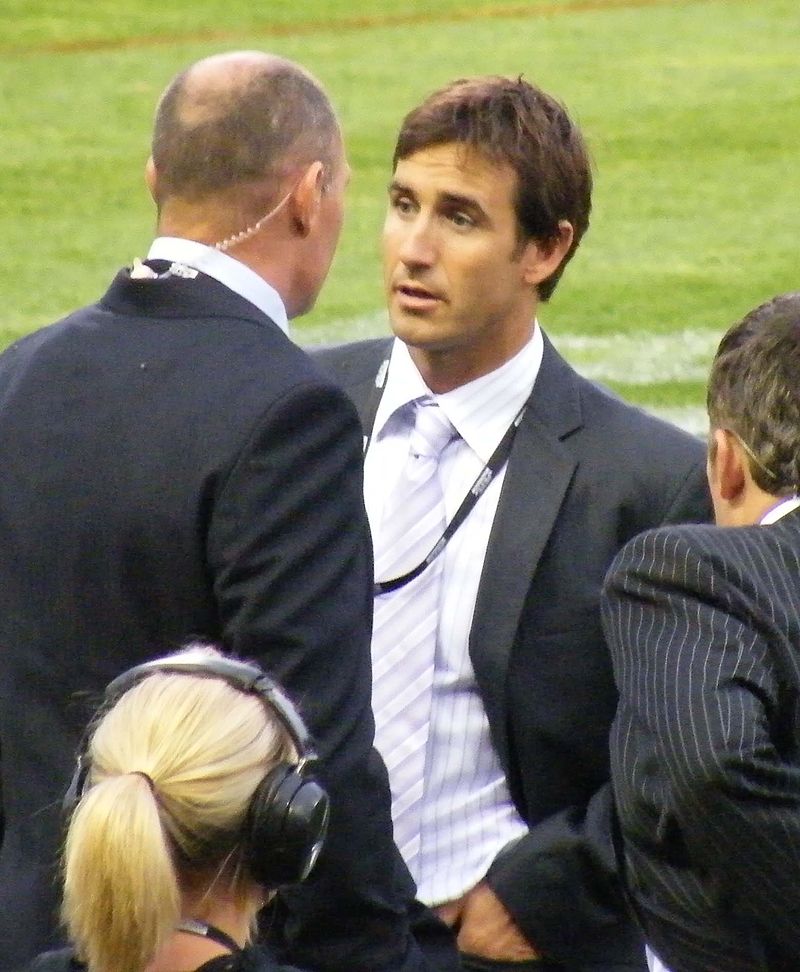 Upon his retirement in 2007 due to a bulging disc in his neck, a chorus of league greats called for Andrew Johns to be immediately honoured as an immortal of the game. In the preceding 13 years, the Cessnock junior had revolutionised the game like few others before him. His passing and kicking games became the benchmark for which all other halfbacks are judged.

And he is bipolar – a manic depressive.  And his autobiography is called The Two Of Me.

The Battle with Bipolar 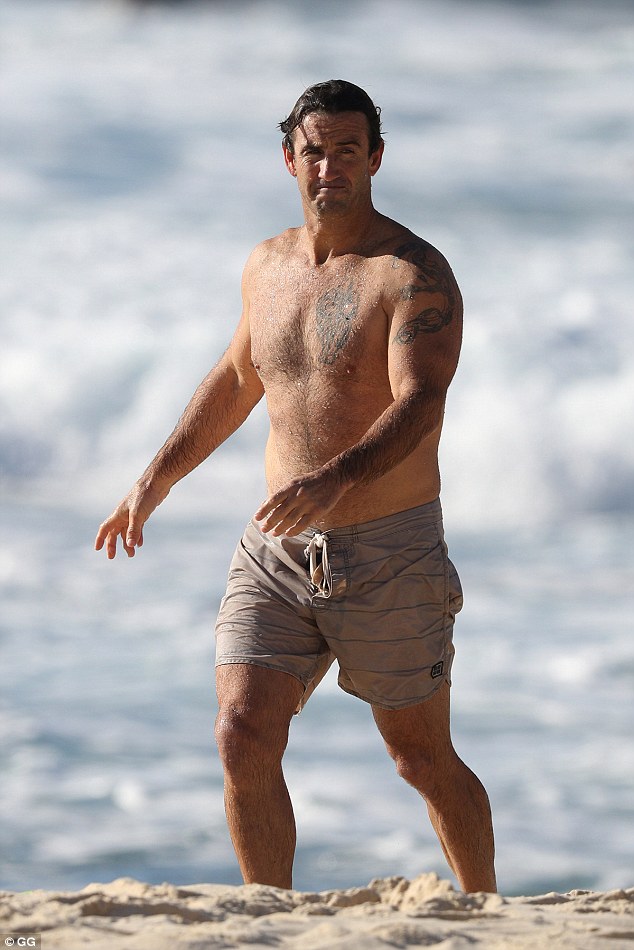 Andrew Johns’ battle with manic depression started in his teens, but he has not indicated what started or was the cause of the sudden plunge into first depression then mania, other than the normal teenage angst.  He battled with bipolar throughout his career,  right up to his retirement.

On 26 August 2007 Johns was arrested for fare evasion on the London Underground, and subsequently found to be in possession of one Ecstasy tablet. He was cautioned and released with no further charges.   But then everything started to spill out.

THE psychiatrist treating Andrew Johns last night revealed how the former league star has plummeted into the depths of despair as he battles to bring his bipolar disorder under control.  Professor Gordon Parker confirmed Johns was in "a very bad state'', with friends and family extremely worried about his well-being.  In an exclusive interview with The Sunday Telegraph, Professor Parker told how Johns had been unable to take his bipolar medication for six days in London after his luggage containing the drugs was lost in transit.

This triggered a manic "high'' episode that resulted in Johns' ill-fated alcohol binge and subsequent arrest for possession of an ecstasy tablet.  "He is in a very bad state now,'' Professor Parker said. "People around him are worried. 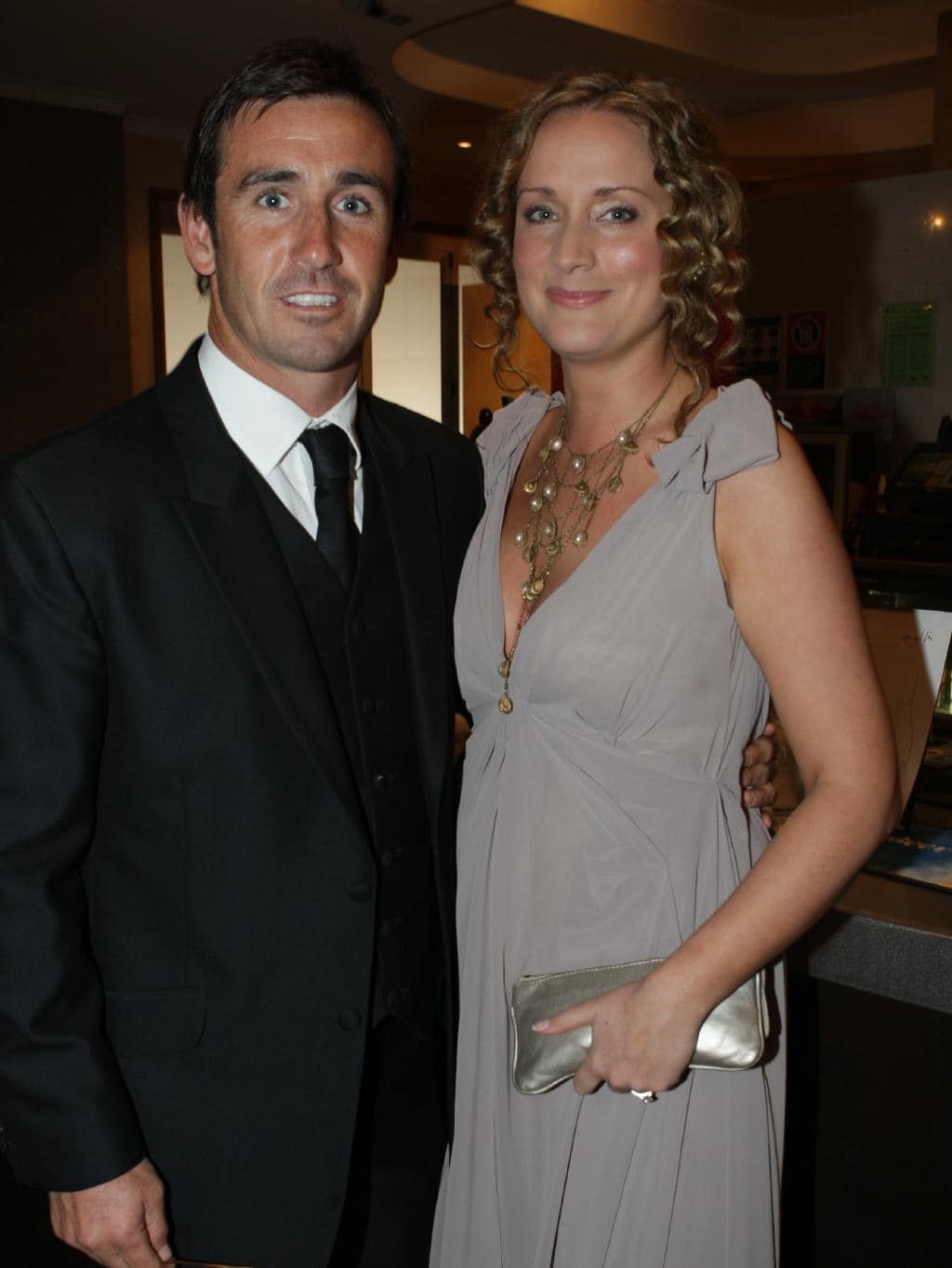 "But Andrew has told me today the fact that he has elected to talk about his bipolar disorder with the support of his partner Catherine (Mahoney - see right) and his manager (John Fordham), it is a big relief.''

During depressions, the suicide risk is high, with as many as 15 per cent of sufferers taking their own lives. Johns was diagnosed more than three years ago and has been taking a combination of mood stabilisers and tranquillisers.  League officials were informed by letter of his condition and prescription, he said.

On 30 August, Johns revealed, live on the Footy Show, that he had regularly taken Ecstasy throughout his playing career, principally to combat the depression from his bipolar disorder, and the drugs helped him in dealing with the high level of psychological 'pressure' associated with his career as an 'elite sportsman'.

His psychiatrist, however, has indicated that Johns' high or manic periods are likely to have helped his performance on the pitch - although this would have been counteracted by poorer playing during low times - unless of course the Ecstasy counteracted this.  Not long after the incident he released his 'tell-all' autobiography that went into further details regarding his depression and drug use while playing in the NRL.

Johns has in recent years devoted a great deal of his time to talking about what it means to be manic depressive and in urging children to seek help and admit they have problems, if they start to experience the tell tale signs 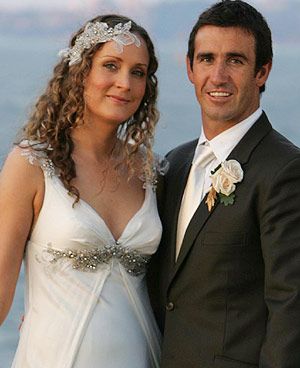 STUDENTS and staff at South Grafton High School went into shock on Monday as the eighth rugby league Immortal, Andrew "Joey" Johns paid a visit to the school.  Mr Johns' visit came after a chance encounter with Abcare executive officer Greg Bennett on a flight to Melbourne for Game One of this year's State of Origin series. Mr Bennett happened to be seated next to Mr Johns and after chatting about Mr Bennett's work, the former NSW Origin great offered to visit South Grafton High to tell his story of growing up with a mental health condition.  Mr Johns described the encounter as "a sign", saying he believed being seated next to Mr Bennett was meant to happen, to allow him to tell his story and hopefully inspire young people going through their own battle.

Mr Johns spoke of his much publicised battle with bi-polar disorder and depression, telling stories of his childhood and time playing for the Newcastle Knights. He had a clear message for the students - don't be afraid to seek help. "Not only were many students bought to tears, but Joey himself teared up talking about, and obviously reliving, his journey with mental health," South Grafton High School teacher, Mr Nathan Martin, said. 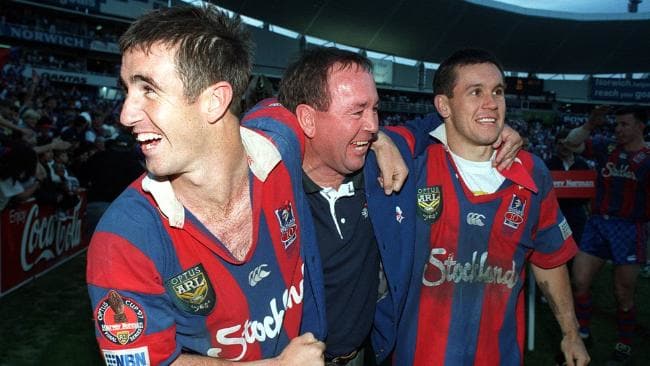 In February 2008, Johns was named in the list of Australia's 100 Greatest Players (1908–2007) which was commissioned by the NRL and ARL to celebrate the code's centenary year in Australia. 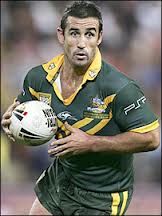 On 27 October 2007, Johns married his long time partner Catherine Mahoney in a secret wedding.   When Johns returned from his honeymoon at the beginning of the 2008 Pre-season, he began a part-time coaching role with the Parramatta Eels.  On 9 September 2008 at the Dally M awards in Sydney, Johns and his wife Catherine announced they were expecting their first child in March 2009. Johns has a son from his previous marriage. On 2 March 2009, Johns and wife Catherine welcomed their first child and son Louis Byron.

But in the end Catherine and Andrew split up, not long after they were married, and Andrew 'Joey' Johns has become a father for the third time, welcoming his first child with a new partner Kate Kendall.   The 44-year-old and his yoga instructor partner have a daughter called Alice. 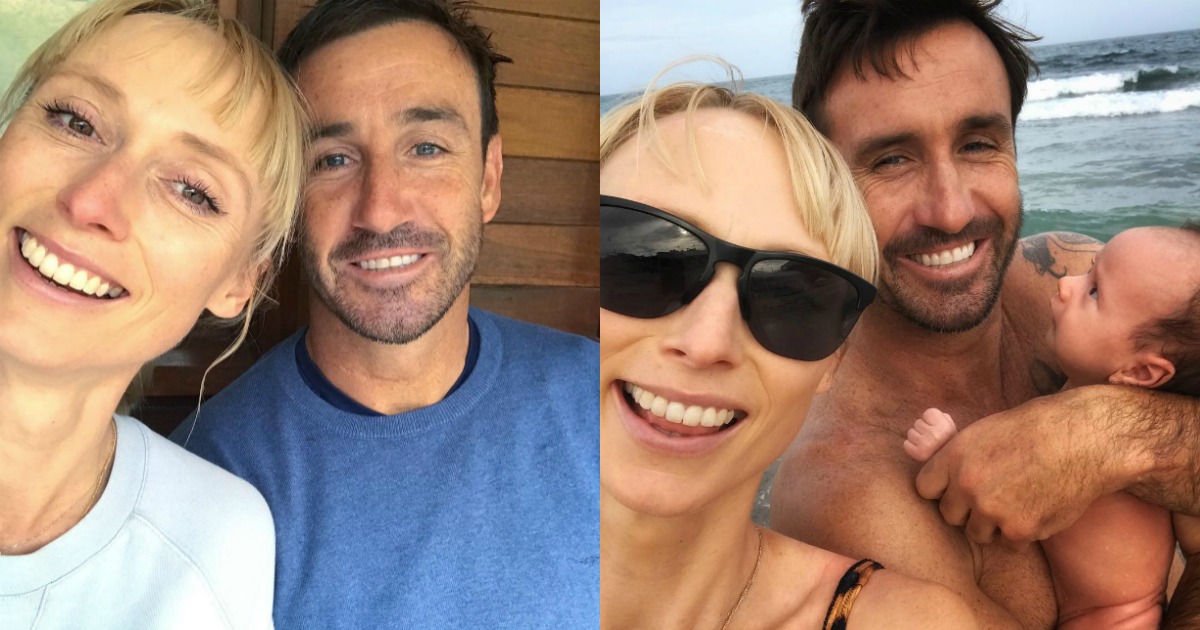