N,N-Dimethyltryptamine (DMT) is a naturally occurring chemical of the tryptamine family. It is found not only in several plants, but also in trace amounts in humans and other mammals, where it is originally derived from the essential amino acid tryptophan, and ultimately produced by the enzyme INMT during normal metabolism.

The amount we have is tiny, few of the analytical methods used to measure levels of endogenously formed DMT prior to about 2001, had enough sensitivity and selectivity to produce reliable results, but if there is any endogenous DMT in our bodies it seems to be mostly in the kidney, lung and lumbar regions and, of especial interest, in the cerebrospinal fluid.

“There has been speculation that DMT may play a role in mediating the visual effects of natural dreaming, and also near-death experiences. But practically speaking, the natural function of its widespread presence remains undetermined”.

Structurally, DMT is similar to the neurotransmitter serotonin (5-HT) and the hormone melatonin.

Thus in the now familiar pattern we have seen with many of the chemicals on this site, it is illegal to use it 'recreationally' but legal to use it medically. 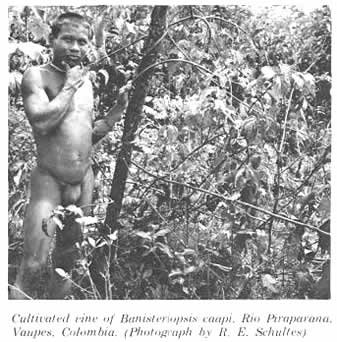 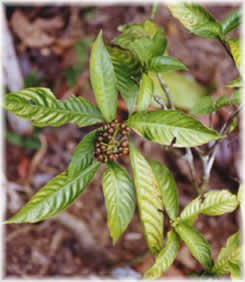 Many older shamanic cultures have used DMT in its plant based form for hundreds if not thousands of years. DMT is one of the constituents of Ayahuasca, for example, an Amazonian Amerindian brew 'employed for divinatory and healing purposes.' Pharmacologically, Ayahuasca combines DMT containing plants with a monoamine oxidase inhibitor (MAOI) containing plant or plants. There are a variety of recipes for Ayahuasca, but most commonly it is simply the leaves of Psychotria viridis (the source of DMT) and the vine Banisteriopsis caapi (the source of MAOI).

DMT is not the same as Ayahuasca, which has extremely positive medicineal use in helping thos e with depression and addicitive illnesses.  DMT has none of these capabilities.  For more details follow the LINK.

DMT was first synthesized in 1931 by Canadian chemist Richard Manske (1901–1977). Its discovery as a natural product is generally credited to Brazilian chemist and microbiologist Oswaldo Gonçalves de Lima (1908–1989) who, in 1946, isolated the chemical from the root bark of jurema preta, i.e. Mimosa tenuiflora. Since then DMT has been found in at least 50 other plant species and in at least 4 animal species.

In 1965 , for example, French pharmacologist Jacques Poisson isolated DMT in the leaves of the vine Diplopterys cabrerana. In 1970, the first identification of DMT in Psychotria viridis was made. These plants were already well known to the indigenous community, for example, P. viridis was used by Cashinahua Indians. DMT was found to be a minor alkaloid in snuff made from Virola bark resin. DMT was also found as a minor alkaloid in bark, pods, and beans of Anadenanthera peregrina and Anadenanthera colubrina used to make Yopo and Vilca snuff.

The psychological effects of DMT were first studied scientifically by the Hungarian chemist and psychologist Dr. Stephen Szára who performed research with volunteers in the mid-1950s. Szára, who later worked for the US National Institutes of Health, had turned his attention to DMT after his order for LSD from the Swiss company Sandoz Laboratories was rejected on the grounds that the drug could be dangerous in the hands of a communist country. Szara discovered that DMT produced effects similar to LSD. The only difference was in duration. Whereas LSD typically lasts 8 to 10 hours, DMT lasted from 40 minute to 1 hour.

Further studies were made from about 1990 through to 1995, by the University of New Mexico psychiatrist Dr Rick Strassman [see observations]. In a September, 2009, interview with Examiner.com, Strassman described the effects on participants in the study:

"Subjectively, the most interesting results were that high doses of DMT seemed to allow the consciousness of our volunteers to enter into non-corporeal, free-standing, independent realms of existence inhabited by beings of light who oftentimes were expecting the volunteers, and with whom the volunteers interacted. While “typical” near-death [sic] and mystical states occurred, they were relatively rare."

Please note he did not say near death like experiences, which makes the comment rather interesting, if true.

The chemicals he mentions are nearly all stress related neurotransmitters – those released at times of great fear and danger.

In December 2004, the USA Supreme Court allowed the Brazil-based União do Vegetal (UDV) church to use a decoction containing DMT in their Christmas services that year. This decoction is a "tea" made from boiled leaves and vines, known as hoasca within the UDV, and ayahuasca in different cultures. In Gonzales v. O Centro Espirita Beneficente Uniao do Vegetal, the Supreme Court heard arguments on November 1, 2005 and unanimously ruled in February 2006 that the U.S. federal government must allow the UDV to import and consume the tea for religious ceremonies under the 1993 Religious Freedom Restoration Act.

In September, 2008, the three Santo Daime churches filed suit in federal court to gain legal status to import DMT-containing ayahuasca tea. The case, Church of the Holy Light of the Queen v. Mukasey, presided over by Judge Owen M. Panner, was ruled in favor of the Santo Daime church. As of March 21, 2009 a federal judge said members of the church in Ashland can import, distribute and brew ayahuasca. U.S. District Judge Owen Panner issued a permanent injunction barring the government from prohibiting or penalizing the sacramental use of "Daime tea." Panner's order said activities of The Church of the Holy Light of the Queen are legal and protected under freedom of religion. His order prohibits the federal government from interfering with and prosecuting church members who follow a list of regulations set out in his order.

Other plants and sources [source Rasch]

I am not going to provide you with a detailed description of how to use this drug, but I think it helps to have some background on how it has been used, so that you are able to understand the observations.
Pure DMT is most often found in crystal form It has been smoked, inhaled and injected [intramuscular (IM) injection and intravenous (IV) administration ]. 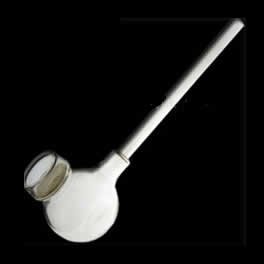 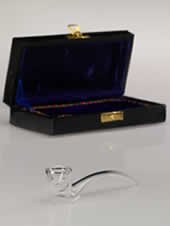 DMT is generally not active orally unless it is combined with an MAOI, the body quickly metabolizes orally administered DMT, and it therefore has no effect [unless the dose exceeds monoamine oxidase's metabolic capacity]. If taken orally, MAOIs have to be used with extreme caution as they have been found to have lethal complications with some prescription drugs such as SSRI antidepressants, some over-the-counter drugs, and a number of common foods. South Americans fast for long periods before taking ayahuasca.
Depending on the dose, “its subjective effects can range from short-lived mild experiences to powerful immersive experiences, which include a total loss of connection to conventional reality, which may be so extreme that it becomes ineffable. Psychologically, the DMT experience can be overly-intense, potentially causing overwhelming fear and difficulty integrating experiences, if one is not mentally prepared.” [Wikipedia's words not mine]

Physically - According to Wikipedia “DMT binds non-selectively with affinities < 0.6 μM to a number of serotonin receptors, it is worth noting that chronic or frequent uses of serotonergic drugs have been causally linked to valvular heart disease. The following serotonin receptors are known:

It has also been shown to possess affinity for the dopamine D1, α1-adrenergic, α2-adrenergic, imidazoline-1, sigma-1 (σ1), and trace amine-associated receptors.”

This is the hardware view. To make sense of the experience we need a software view.

Logically – DMT at the doses mentionned is probably regarded by the body as a major threat and one which compromises its own DMT balance. Thus the will is likely to indeed perform the early stages of a near death like experience in which memory and reason are subjugated and the will lets the autonomic system fight for its survival. As the will lets go, the composer steps in. I Have included the following assessment, as it may prove helpful

From 'An Open Letter to Dr Timothy Leary” by the Rt Rev Michael Francis Itken
I have recently done a great deal of research and study on this matter and I find that neither DMT or DET are truly psychedelics, nor for that matter even true hallucinogenic agents in the general usage of those terms. Rather, both DMT and DET are deliriants that is the effects they achieve are obtained by subjecting the body to a state of delirium similar to that which might accompany a fever of 105 degrees. The degree wrought to the physical center is commensurate with the physical conditions accompanying a 105 degree fever. In addition, I am sure you have observed the temporarily ruptured blood vessels in the eyes of those who have used DMT or DET with great frequency. Consider then, what these same deliriants must do to the same blood vessels throughout the intestinal tract, to the tissues of the liver, to the brain cells and perhaps most clearly possible and defined, to the heart – particularly the aorta.

The reason that DMT does not last as long as LSD is that as a threat, the body has at least some armoury [if it is indeed endogenous] to cope with an overdose. With LSD, it does not.